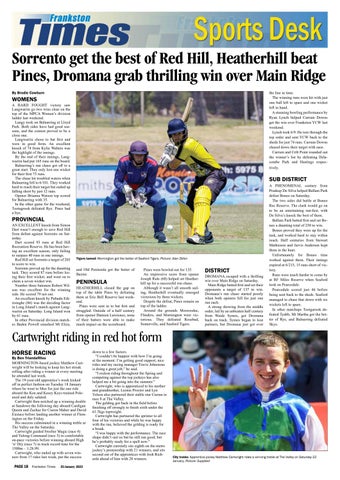 Sorrento get the best of Red Hill, Heatherhill beat Pines, Dromana grab thrilling win over Main Ridge the line in time. The winning runs were hit with just one ball left to spare and one wicket left in hand. A stunning bowling performance by Ryan Lynch helped Carrum Downs get the win over Frankston YCW last weekend. Lynch took 6/9. He tore through the top order and sent YCW back to the sheds for just 74 runs. Carrum Downs chased down their target with ease. Carrum and Crib Point rounded out the winner’s list by defeating Delacombe Park and Hastings respec-

A HARD FOUGHT victory saw Langwarrin go two wins clear on the top of the MPCA Women’s division ladder last weekend. Langy took on Balnarring at Lloyd Park. Both sides have had good seasons, and the contest proved to be a close one. Langwarrin chose to bat first and were in good form. An excellent knock of 74 from Kylie Walters was the highlight of the innings. By the end of their innings, Langwarrin had put 165 runs on the board. Balnarring’s run chase got off to a great start. They only lost one wicket for their first 73 runs. The chase hit troubled waters when Balnarring fell to 6/101. They worked hard to reach their target but ended up falling short by just 12 runs. Opener Brianna Watson top scored for Balnarring with 35. In the other game for the weekend, Tootagrook defeated Rye. Pines had a bye.

AN EXCELLENT knock from Simon Dart wasn’t enough to save Red Hill from defeat against Sorrento on Saturday. Dart scored 93 runs at Red Hill Recreation Reserve. He has been having an excellent season, only failing to surpass 40 runs in one innings. Red Hill set Sorrento a target of 203 to score to win. Sorrento proved up for the daunting task. They scored 87 runs before losing their first wicket, and went on to claim a seven wicket win. Number three batsmen Robert Wilson was excellent for the winning side. He scored 79 not out. An excellent knock by Pubudu Edirisinghe (86) was the deciding factor in Long Island’s match against Langwarrin on Saturday. Long Island won by 61 runs. In other Provincial division matches Baden Powell smashed Mt Eliza,

and Old Peninsula got the better of Baxter.

HEATHERHILL closed the gap on top of the table Pines by defeating them at Eric Bell Reserve last weekend. Pines were sent in to bat first and struggled. Outside of a half century from opener Damien Lawrence, none of their batters were able to make much impact on the scoreboard.

Pines were bowled out for 135. An impressive score from opener Joseph Rule (68) helped set Heatherhill up for a successful run chase. Although it wasn’t all smooth sailing, Heatherhill eventually emerged victorious by three wickets. Despite the defeat, Pines remain on top of the ladder. Around the grounds Moorooduc, Flinders, and Mornington were victorious. They defeated Rosebud, Somerville, and Seaford Tigers.

DROMANA escaped with a thrilling win over Main Ridge on Saturday. Main Ridge batted first and set their opponents a target of 137 to win. Dromana’s run chase started poorly when both openers fell for just one run each. A strong showing from the middle order, led by an unbeaten half century from Waide Symes, got Dromana back on track. Symes began to lose partners, but Dromana just got over

A PHENOMENAL century from Pradeep De Silva helped Ballam Park defeat Boneo on Saturday. The two sides did battle at Boneo Rec Reserve. The clash would go on to be an entertaining run-fest, with De Silva’s knock the best of them. Ballam Park batted first and set Boneo a daunting total of 230 to win. Boneo proved they were up for the task, and worked hard to stay within reach. Half centuries from Stewart Mathieson and Jarvis Andersen kept them in the hunt. Unfortunately for Boneo time worked against them. Their innings expired at 6/215, 15 runs short of victory. Runs were much harder to come by at RF Miles Reserve when Seaford took on Pearcedale. Pearcedale scored just 46 before being sent back to the sheds. Seaford managed to chase that down with six wickets left to spare. In other matchups Tootgarook defeated Tyabb, Mt Martha got the better of Rye, and Balnarring defeated Skye.

By Ben Triandafillou MORNINGTON-based jockey Matthew Cartwright will be looking to keep his hot streak rolling after riding a winner at every meeting he attended last week. The 19-year-old apprentice’s week kicked off in perfect fashion on Tuesday 18 January where he went to Moe for just the one ride aboard the Ken and Kasey Keys-trained Poleaxed and duly saluted. Cartwright then notched up a winning double at Sandown the following day aboard Cardigan Queen and Zachaz for Ciaron Maher and David Eustace before landing another winner at Flemington on the Friday. His success culminated in a winning treble at The Valley on the Saturday. Cartwright guided Swelter Magic (race 4) and Yulong Command (race 5) to comfortable on-pace victories before winning aboard High ‘n’ Dry (race 7) in track record time for the 1500m – 1:28.99. Cartwright, who ended up with seven winners from 17 rides last week, put the success

down to a few factors. “I couldn’t be happier with how I’m going at the moment. I’m getting good support, nice rides and my racing manager Travis Johnstone is doing a great job,” he said. “I reckon riding throughout the Spring and competing against the top jockeys has also helped me a bit going into the summer.” Cartwright, who is apprenticed to his mother and grandmother, Leonie Proctor and Lyn Tolson also partnered their stable star Curran in race 8 at The Valley. The gelding got back in the field before finishing off strongly to finish sixth under the 61.5kgs topweight. Cartwright has partnered the sprinter to all four of his victories and while he was happy with the run, believed the gelding is ready for a break. “I was happy with the performance. The race shape didn’t suit us but he still ran good, but he’s probably ready for a spell now.” Cartwright currently sits eighth on the metro jockey’s premiership with 21 winners, and sits second out of the apprentices with Josh Richards ahead of him with 28 winners.