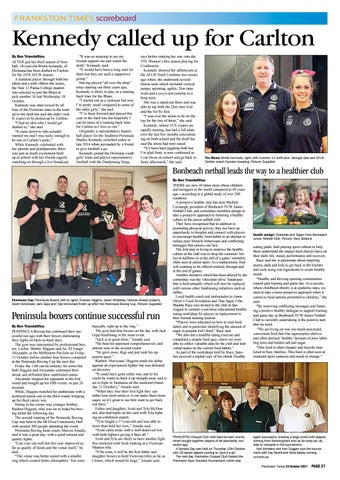 Kennedy called up for Carlton By Ben Triandafillou AFTER just her third season of football, 18-year-old Bridie Kennedy, of Dromana has been drafted to Carlton for the 2018 AFLW season. A standout player through both her talent and a pink ribbon she wears, the Year 12 Padua College student was selected to join the Blues at pick number 36 last Wednesday 18 October. Kennedy was interviewed by all four of the Victorian sides in the leadup to the draft but said she didn’t really expect to be picked up by Carlton. “I had no idea who I would get drafted to,” she said. “It came down to who actually wanted me and I was lucky enough to be one of Carlton’s picks.” While Kennedy celebrated with her parents and grandparents, there was just as much excitement built up at school with her friends eagerly watching on through a live broadcast.

“It was so amazing to see my friends support me and watch the draft,” Kennedy said. “It would have been a long wait for them but they are such a supportive group.” Having played “all over the shop” since starting out three years ago, Kennedy is likely to play as a running back liner for the Blues. “I started out as a ruckman but now I’m pretty small compared to some of the other girls,” she said. “I’ve been forward and played this year in the back line but hopefully I can be more of a running back liner for Carlton as I love to run.” Originally a representative basketball player for the Southern Peninsula Sharks, Kennedy switched codes in late 2014 when persuaded by a friend to give football a go. Kennedy joined the Dromana youth girls’ team and played representative football with the Dandenong Sting-

rays before making her way into the VFL Women’s this season playing for Cranbourne. Kennedy showed her athleticism at the AFLW Draft Combine two weeks ago where she undertook several fitness tests which included vertical jumps, sprinting, agility, 2km time trials and a yo-yo test (similar to a beep test). She was a stand-out there and was able to top both the 2km time trial and the Yo-Yo Test. “I was over the moon to be on the top for the two of them,” she said. Kennedy, whose VCE exams are rapidly nearing, has had a full plate over the last few months concentrating on both school and the draft but said the stress had now eased. “It’s been hard juggling both but I’m glad footy is now confirmed so I can focus on school and go back to footy afterwards,” she said.

Bonbeach netball leads the way to a healthier club

Peninsula boxers continue successful run By Ben Triandafillou PENINSULA Boxing has continued their successful run ago with their boxers dominating their fights on back-to-back days. The gym was represented by professional boxers, Lochie ‘Bubba’ Higgins and Jai ‘El Fuego’ Alexander, at the Melbourne Pavilion on Friday 13 October before another four boxers competed at the Peninsula Boxing Cup the next day. Friday the 13th can be unlucky for some but both Higgins and Alexander continued their streak and defended their undefeated status. Alexander stopped his opponent in the first round and bought up his fifth victory in just 26 seconds. While, Higgins matched his stablemate with a technical knock-out in the third round, bringing up his third career win. Sitting in his corner was younger brother, Rueben Higgins, who was set to make his boxing debut the following day. The second running of the Peninsula Boxing Cup was held at the Mt Eliza Community Hall with around 300 people attending the event. Peninsula Boxing head coach, Marcos Amado, said it was a great day, with a good turnout and quality fights. “Last year ran well but this year improved as far as quality of bouts and the venue itself,” he said. “The venue was better suited with a smaller ring which created better atmosphere. You were

basically right up to the ring.” The gym had four boxers on the day with Jack Gipp headlining in the main event. “Jack is in great form,” Amado said. “He beat his opponent comprehensively and almost won in the second round. “He gave away 4kgs and just took his opponent apart.” Rueben ‘Hurricane’ Higgins made his debut against an experienced fighter but was defeated on decision. “It could have gone either way and to his credit he wants to back it up straight away and is set to fight in Tasmania on the weekend (Saturday 21 October),” Amado said. “When they lose their first fight they can either lose motivation or it can make them more eager, so it’s great to see him want to get back out there.” Father and daughter, Scott and Tyla McDonald, also had fights on the card with Tyla fighting an exhibition match. “Tyla fought a 17-year-old and was able to more than hold her own,” Amado said. “Scott came away with a well-deserved win with both fighters giving it their all.” Scott and Tyla are likely to have another fight this weekend with Scott looking at a Victorian Masters title. “If he wins, it will be the first father and daughter boxers to hold Victorian titles as far as I know, which would be huge,” Amado said.

By Ben Triandafillou THERE are now 10 times more obese children and teenagers in the world compared to 40 years ago – according to a global study of over 200 countries. A proactive healthy step has seen Michele Cavanagh, president of Bonbeach YCW Junior Netball Club, and committee members pledge to take a proactive approach to fostering a healthy culture at the junior netball club. They have recognised that in addition to promoting physical activity, they too have an opportunity to broaden and connect with players to encourage healthy food habits in an attempt to reduce poor lifestyle behaviours and conflicting messages that juniors can face. The first step in trying to improve the healthy culture at the club was to drop the common ‘lollies at halftime or at the end of a game’ mentality often seen at junior sport. As a replacement, fruit will continue to be offered midway through and at the end of games. Another initiative which has been altered by the committee was the ‘chocolate drive’ fundraiser that is held annually which will now be replaced with various other fundraising initiatives such as raffles. Local health coach and ambassador to Jamie Oliver’s Food Revolution and That Sugar Film Maddie Race was invited to the club in lateAugust to conduct a one-hour educational healthy eating workshop for players in replacement to their normal training session. “Players were educated on how to read food labels and in particular identifying the amount of sugar in popular kid’s food,” Race said. “We also did a mindful eating exercise and completed a simple food quiz, where we were able to collect valuable data for the club and individual teams on the current food habits.” As part of the workshops held by Race, families received a digital copy of her ebook Healthy

FRANKSTON Croquet Club held back-to-back events which bought together players of all standards, two weeks ago. A Seniors Day was held on Thursday 12th October with 33 senior players coming to “give it a go”. The next day, Frankston Croquet Club hosted the Frankston Open Doubles Tournament, which was

eating guide, kids playing sport edition to help them understand the impact food choices have on their daily life, mood, performance and recovery. Race said she is passionate about inspiring mums, dads and kids to get back in the kitchen and cook using real ingredients to create healthy meals. “Healthy and thriving sporting communities extend past training and game day. As a society, where childhood obesity is at epidemic rates, we need to take a more proactive approach when it comes to food options presented to children,” she said. “By removing conflicting messages and fostering a positive healthy dialogue to support training and game day as Bonbeach YCW Junior Netball Club is currently undertaking is the positive start that we need. “We are living on way too much processed, convenient food that line supermarket shelves and often deemed ‘healthy’ because of poor labelling laws and hidden salt and sugar. “This food is often cheaper and directly marketed to busy families. This food is often seen at weekend sport canteens and needs to change.”

again successful, drawing a large crowd with players coming from Sandringham and as far away as Lilydale to compete in the tournament. Neil Johnston and Ken Duggan won the tournament with Kay Revell and Ross Bayley coming runners-up. Frankston Times 23 October 2017