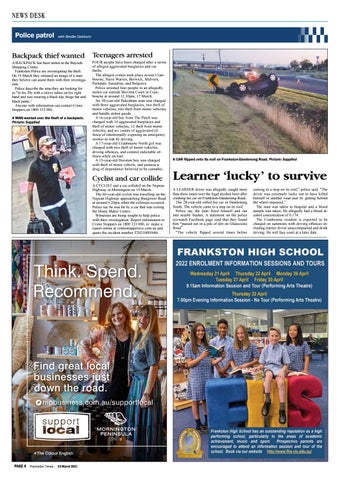 Backpack thief wanted Teenagers arrested A BACKPACK has been stolen at the Bayside Shopping Centre. Frankston Police are investigating the theft. On 19 March they released an image of a man they believe can assist them with their investigation. Police describe the man they are looking for as “in his 30s with a sleeve tattoo on his right hand and was wearing a black top, beige hat and black pants.” Anyone with information can contact Crime Stoppers on 1800 333 000. A MAN wanted over the theft of a backpack. Picture: Supplied

A CAR flipped onto its roof on Frankston-Dandenong Road. Picture: Supplied

A CYCLIST and a car collided on the Nepean Highway in Mornington on 14 March. The 66-year-old cyclist was travelling on the Nepean Highway approaching Bungower Road at around 6.20pm when the collision occurred. Police say he was hit by a car that was exiting the Home Maker Centre. Witnesses are being sought to help police with their investigation. Report information to Crime Stoppers on 1800 333 000, or make a report online at crimestoppersvic.com.au and quote the incident number T20210005686.

A LEARNER driver was allegedly caught more than three times over the legal alcohol limit after crashing his car on Frankston-Dandenong Road. The 28-year-old rolled his car in Dandenong South. The vehicle came to a stop on its roof. Police say the man freed himself and ran into nearby bushes. A statement on the police eyewatch Facebook page read that they found him “passed out in a pile of dirt on Glasscocks Road”. “The vehicle flipped several times before

coming to a stop on its roof,” police said. “The driver was extremely lucky not to have killed himself or another road user by getting behind the wheel impaired.” The man was taken to hospital and a blood sample was taken. He allegedly had a blood alcohol concentration of 0.174. The Cranbourne resident is expected to be charged on summons with driving offences including learner driver unaccompanied and drink driving. He will face court at a later date.