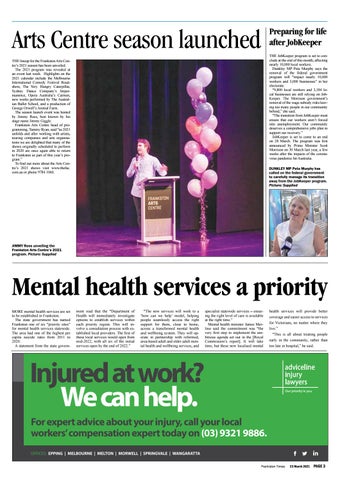 Preparing for life after JobKeeper THE JobKeeper program is set to conclude at the end of this month, affecting nearly 10,000 local workers. Dunkley MP Peta Murphy says the removal of the federal government program will “impact nearly 10,000 workers and 3,000 businesses” in her electorate. “9,800 local workers and 3,184 local businesses are still relying on JobKeeper. The Morrison government’s removal of the wage subsidy risks leaving too many people in our community behind,” she said. “The transition from JobKeeper must ensure that our workers aren’t forced into unemployment. Our community deserves a comprehensive jobs plan to support our recovery.” JobKeeper is set to come to an end on 28 March. The program was first announced by Prime Minister Scott Morrison on 30 March last year, a few weeks after the impacts of the coronavirus pandemic hit Australia.

THE lineup for the Frankston Arts Centre’s 2021 season has been unveiled. The 2021 program was revealed at an event last week. Highlights on the 2021 calendar include the Melbourne International Comedy Festival Roadshow, The Very Hungry Caterpillar, Sydney Dance Company’s Impermanence, Opera Australia’s Carmen, new works performed by The Australian Ballet School, and a production of George Orwell’s Animal Farm. The season launch event was hosted by Jimmy Rees, best known by his stage name Jimmy Giggle. Frankston Arts Centre head of programming, Tammy Ryan, said “as 2021 unfolds and after working with artists, touring companies and arts organisations we are delighted that many of the shows originally scheduled to perform in 2020 are once again able to return to Frankston as part of this year’s program.” To find out more about the Arts Centre’s 2021 shows visit www.thefac. com.au or phone 9784 1060.

DUNKLEY MP Peta Murphy has called on the federal government to carefully manage its transition away from the JobKeeper program. Picture: Supplied

ment read that the “Department of Health will immediately investigate options to establish services within each priority region. This will involve a consultation process with established local providers. The first of these local services would open from mid-2022, with all six of the initial services open by the end of 2022.”

specialist statewide services – ensuring the right level of care is available at the right time.” Mental health minister James Merlino said the commitment was “the very first step to implement the ambitious agenda set out in the [Royal Commission’s report]. It will take time, but these new localised mental

health services will provide better coverage and easier access to services for Victorians, no matter where they live.” “This is all about treating people early in the community, rather than too late in hospital,” he said.

Our priority is you