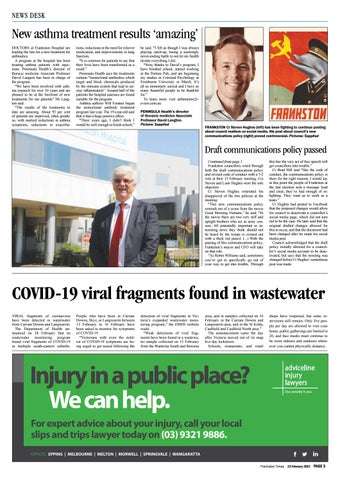 New asthma treatment results ‘amazing’ DOCTORS at Frankston Hospital are leading the line for a new treatment for asthmatics. A program at the hospital has been treating asthma patients with injections. Peninsula Health’s director of thoracic medicine Associate Professor David Langton has been in charge of the program. “We have been involved with asthma research for over 10 years and are pleased to be at the forefront of new treatments for our patients” Mr Langton said. “The results of the treatments to date are amazing. About 95 per cent of patients are improved, often greatly so, with marked reductions in asthma symptoms, reductions in exacerba-

tions, reductions in the need for reliever medication, and improvements in lung function. “It is common for patients to say that their lives have been transformed as a result.” Peninsula Health says the treatments contain “monoclonal antibodies which target and block chemicals produced by the immune system that lead to airway inflammation”. Around half of the patients the hospital assesses are found suitable for the program. Asthma sufferer Will Footner began the monoclonal antibody treatment program last year. The 19-year-old said that it had a huge positive effect. “Three years ago, I didn’t think I would be well enough to finish school,”

he said. “I felt as though I was always playing catch-up, losing a seemingly never-ending battle to not let my health dictate everything I did. “Now, thanks to David’s program, I have finished school, started working at the Portsea Pub, and am beginning my studies in Criminal Psychology at Swinburne University in March. It’s all so immensely surreal and I have so many beautiful people to be thankful for.” To learn more visit asthmatime2review.com.au PENINSULA Health’s director of thoracic medicine Associate Professor David Langton. Picture: Supplied

Draft communications policy passed Continued from page 1 Frankston councillors voted through both the draft communications policy and revised code of conduct with a 7-2 vote at their 15 February meeting. Crs Steven and Liam Hughes were the sole objectors. Cr Steven Hughes reiterated his disapproval of the two policies at the meeting. “This new communications policy reminds me of a scene from the movie Good Morning Vietnam,” he said. “In the movie there are two very stiff and uptight brothers who act as army censors. All potentially important or interesting news they think should not be heard by the troops is crossed out with a thick red pencil. (...) With the passing of this communications policy, Frankston’s mayor and CEO will take on that role. “As Robin Williams said, sometimes you’ve got to specifically go out of your way to get into trouble. Through

this law the very act of free speech will get councillors into trouble.” Cr Brad Hill said “like the code of conduct, the communications policy is there for the right reasons. I would say at this point the people of Frankston at the last election sent a message loud and clear, they’ve had enough of infighting. They want us to work as a team.” Cr Hughes had posted to Facebook that the proposed changes would allow for council to deactivate a councillor’s social media page, which did not turn out to be the case. He later said that the original drafted changes allowed for this to occur, and that the document had been changed after he made his social media post. Council acknowledged that the draft policy initially allowed for a councillor’s social media account to be deactivated, but says that the wording was changed before Cr Hughes’ contentious post was made.

People who have been in Carrum Downs, Skye, or Langwarrin between 13 February to 16 February have been asked to monitor for symptoms of COVID-19. “Victorians with even the mildest of COVID-19 symptoms are being urged to get tested following the

area, and in samples collected on 16 February in the Carrum Downs and Langwarrin area, and in the St Kilda, Caulfield and Caulfield North area.” The announcement came the day after Victoria moved out of its snap five day lockdown. Schools, restaurants, and retail

shops have reopened, but some restrictions still remain. Only five people per day are allowed to visit your home, public gatherings are limited to 20, and face masks must continue to be worn indoors and outdoors whenever you cannot physically distance.

Our priority is you