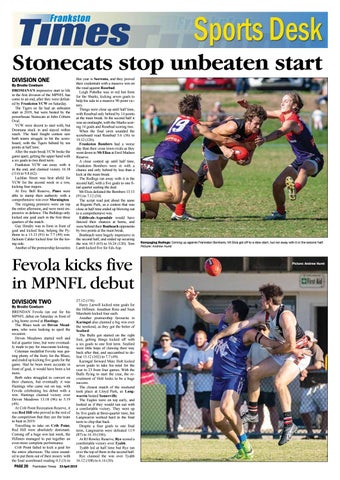 By Brodie Cowburn DROMANAâ&#x20AC;&#x2122;S impressive start to life in the first division of the MPNFL has come to an end, after they were defeated by Frankston YCW on Saturday. The Tigers so far had an unbeaten start in 2019, but were bested by the powerhouse Stonecats at John Coburn Oval. YCW were decent to start with, but Dromana stuck in and stayed within reach. The hard fought contest saw both teams struggle to hit the scoreboard, with the Tigers behind by ten points at half time. After the main break YCW broke the game apart, getting the upper hand with a six goals to two third term. Frankston YCW ran away with it in the end, and claimed victory 16.18 (114) to 9.8 (62). Lachlan Street was best afield for YCW for the second week in a row, kicking four majors. At Eric Bell Reserve, Pines were able to stamp their authority with a comprehensive win over Mornington. The reigning premiers were on top the entire afternoon, and were most impressive in defence. The Bulldogs only kicked one goal each in the first three quarters of the match. Guy Hendry was in form in front of goal and kicked four, helping the Pythons to a 13.13 (91) to 7.7 (49) win. Jackson Calder kicked four for the losing side. Another of the premiership favourites

this year is Sorrento, and they proved their credentials with a massive win on the road against Rosebud. Leigh Poholke was in red hot form for the Sharks, kicking seven goals to help his side to a massive 90 point victory. Things were close up until half time, with Rosebud only behind by 14 points at the main break. In the second half it was an onslaught, with the Sharks scoring 14 goals and Rosebud scoring two. When the final siren sounded the scoreboard read Rosebud 5.6 (36) to 19.12 (126). Frankston Bombers had a worse day than their cross town rivals as they went down to Mt Eliza at Emil Madsen Reserve. A close contest up until half time, Frankston Bombers were in with a chance and only behind by less than a kick at the main break. The Redlegs ran away with it in the second half, with a five goals to one final quarter sealing the deal. Mt Eliza defeated the Bombers 13.13 (91) to 7.12 (54). The script read just about the same at Regents Park, as a contest that was close at half time ended up blowing out to a comprehensive win. Edithvale-Aspendale would have fancied their chances at home, and were behind their Bonbeach opponents by two points at the main break. Bonbeach were hugely impressive in the second half, and ended up securing the win 10.5 (65) to 16.24 (120). Tom Lamb kicked five for Edi-Asp.

By Brodie Cowburn BRENDAN Fevola ran out for his MPNFL debut on Saturday in front of a big home crowd at Hastings. The Blues took on Devon Meadows, who were looking to spoil the occasion. Devon Meadows started well and led at quarter time, but were eventually made to pay for inaccurate kicking. Coleman medallist Fevola was getting plenty of the footy for the Blues, and ended up kicking five goals for the game. Had he been more accurate in front of goal, it would have been a lot more. Both sides struggled to convert on their chances, but eventually it was Hastings who came out on top, with Fevola celebrating his debut with a win. Hastings claimed victory over Devon Meadows 13.18 (96) to 5.19 (49). At Crib Point Recreation Reserve, it was Red Hill who proved to the rest of the competition that they are the team to beat in 2019. Travelling to take on Crib Point, Red Hill were absolutely dominant. Coming off a huge win last week, the Hillmen managed to put together an even more complete performance. Crib Point failed to kick a goal for the entire afternoon. The siren sounded to put them out of their misery with the final scoreboard reading 0.3 (3) to

27.12 (174). Harry Larwill kicked nine goals for the Hillmen. Jonathon Ross and Sean Marchetti kicked four each. Another premiership favourite in Karingal also claimed a big win over the weekend, as they got the better of Seaford. The Bulls got started on the right foot, getting things kicked off with a six goals to one first term. Seaford were little hope of clawing their way back after that, and succumbed to defeat 15.12 (102) to 7.7 (49). Karingal forward Marc Holt kicked seven goals to take his total for the year to 23 from four games. With the Bulls flying to start the year, the recruitment of Holt looks to be a huge success. The closest match of the weekend took place at Lloyd Park, as Langwarrin hosted Somerville. The Eagles were on top early, and looked as if they would run out with a comfortable victory. They were up by five goals at three-quarter time, but Langwarrin worked hard in the final term to chip that back. Despite a four goals to one final term, Langwarrin were defeated 13.9 (87) to 16.10 (106). At RJ Rowley Reserve, Rye scored a comfortable victory over Tyabb. Tyabb led at half time but Rye ran over the top of them in the second half. Rye claimed the win over Tyabb 16.12 (108) to 6.14 (50).

Rampaging Redlegs: Coming up against Frankston Bombers, Mt Eliza got off to a slow start, but ran away with it in the second half. Picture: Andrew Hurst