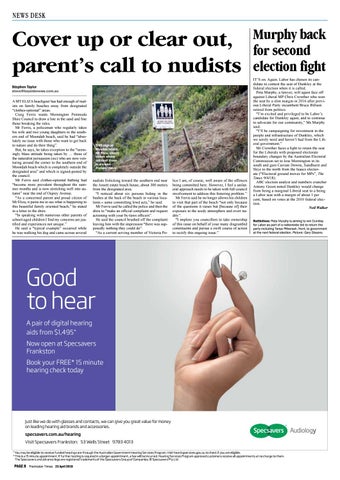 Cover up or clear out, parent’s call to nudists Stephen Taylor steve@baysidenews.com.au A MT ELIZA beachgoer has had enough of nudists on family beaches away from designated “clothes-optional” areas. Craig Ferris wants Mornington Peninsula Shire Council to draw a line in the sand and fine those breaking the rules. Mr Ferris, a policeman who regularly takes his wife and two young daughters to the southern end of Moondah beach, said he had “absolutely no issue with those who want to get back to nature and do their thing”. But, he says, he takes exception to the “seemingly blase attitude being taken by … those of the naturalist persuasion (sic) who are now venturing around the corner to the southern end of Moondah beach which is completely outside the designated area” and which is signed-posted by the council. Mr Ferris said clothes-optional bathing had “become more prevalent throughout the summer months and is now stretching well into autumn” near the end of Osprey Avenue. “As a concerned parent and proud citizen of Mt Eliza, it pains me to see what is happening to this beautiful family oriented beach,” he stated in a letter to the shire. “In speaking with numerous other parents of school-aged children I find my concerns are justified and experiences not unique.” He said a “typical example” occurred while he was walking his dog and came across several

nudists frolicking toward the southern end near the Ansett estate beach house, about 300 metres from the designated area. “I noticed about six persons hiding in the bushes at the back of the beach in various locations – some committing lewd acts,” he said. Mr Ferris said he called the police and then the shire to “make an official complaint and request actioning with your by-laws officers”. He said the council brushed off the complaint leaving him with the impression “there was supposedly nothing they could do”. “As a current serving member of Victoria Po-

lice I am, of course, well aware of the offences being committed here. However, I feel a unilateral approach needs to be taken with full council involvement to address this festering problem.” Mr Ferris said he no longer allows his children to visit that part of the beach “not only because of the questions it raises but [because of] their exposure to the seedy atmosphere and overt nudity”. “I implore you councillors to take ownership of this issue on behalf of your many disgruntled constituents and pursue a swift course of action to rectify this ongoing issue.”

Murphy back for second election fight IT’S on. Again. Labor has chosen its candidate to contest the seat of Dunkley at the federal election when it is called. Peta Murphy, a lawyer, will again face off against Liberal MP Chris Crewther who won the seat by a slim margin in 2016 after previous Liberal Party incumbent Bruce Billson retired from politics. “I’m excited and privileged to be Labor’s candidate for Dunkley again, and to continue to advocate for our community,” Ms Murphy said. “I’ll be campaigning for investment in the people and infrastructure of Dunkley, which we sorely need and haven’t had from the Liberal government.” Mr Crewther faces a fight to retain the seat for the Liberals with proposed electorate boundary changes by the Australian Electoral Commission set to lose Mornington in its south and gain Carrum Downs, Sandhurst and Skye to the north from the Isaacs electorate (“Electoral ground moves for MPs”, The Times 9/4/18). ABC election analyst and numbers cruncher Antony Green noted Dunkley would change from being a marginal Liberal seat to a being a Labor seat with a margin of about 1 per cent, based on votes at the 2016 federal election. Neil Walker Battlelines: Peta Murphy is aiming to win Dunkley for Labor as part of a nationwide bid to return the party including Tanya Plibersek, front, to government at the next federal election. Picture: Gary Sissons

Just like we do with glasses and contacts, we can give you great value for money on leading hearing aid brands and accessories. specsavers.com.au/hearing

Visit Specsavers Frankston: 53 Wells Street 9783 4013 ^ You may be eligible to receive funded hearing care through the Australian Government Hearing Services Program. Visit hearingservices.gov.au to check if you are eligible. * This is a 15 minute appointment. If further testing is required in a longer appointment, a fee will be incurred. Hearing Services Program approved customers receive all appointments at no charge to them. The Specsavers and advance logo are registered trademarks of the Specsavers Group of Companies. © Specsavers Pty Ltd