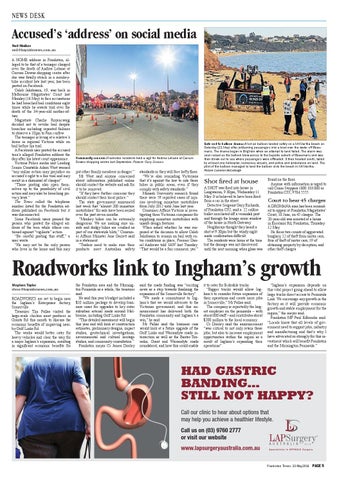 Accused’s ‘address’ on social media Neil Walker neil@baysidenews.com.au A HOME address in Frankston, alleged to be that of a teenager charged over the death of Andrea Lehane at Carrum Downs shopping centre after she was fatally struck in a monkeybike accident late last year, has been posted on Facebook. Caleb Jakobsson, 19, was back in Melbourne Magistrates’ Court last Monday (16 May) to face accusations he had breached bail conditions eight times while he awaits trial over the death of the 34-year-old mother-oftwo. Magistrate Charlie Rozencwajg decided not to revoke bail despite breaches including repeated failures to observe a 10pm to 9am curfew. The teenager is living at a relative’s home in regional Victoria while on bail before his trial. A Facebook user posted the accused teen’s alleged Frankston address the day after his latest court appearance. Victoria Police media unit Leading Senior Constable Adam West warned “any online action may prejudice an accused’s right to a fair trial and may result in a dismissal of charges”. “Those posting also open themselves up to the possibility of civil action and may also be breaching privacy laws.” The Times called the telephone number listed for the Frankston address published on Facebook but it was disconnected. Some Facebook users praised the person who posted the alleged address of the teen while others cautioned against “vigilante” action. “Be careful posting this stuff,” a user wrote. “He may not be the only person who lives in the home and this may

put other family members in danger.” Mr West said anyone concerned about information published online should contact the website and ask for it to be removed. “If they have further concerns they should contact their local police.” The state government announced last week that “almost 200 miniature motorbikes” for sale have been seized over the past seven months. “Monkey bikes can be extremely dangerous. We are making sure unsafe and dodgy bikes are crushed as part of our statewide blitz,” Consumer Affairs Minister Jane Garrett said in a statement. “Traders need to make sure their products meet Australian safety

standards or they will face hefty fines. “We’re also reminding Victorians that it’s against the law to ride these bikes in public areas, even if they comply with safety standards.” Monash University research found there were 59 reported cases of injuries involving miniature motorbikes from July 2012 until June last year. Consumer Affairs Victoria is investigating three Victorian companies for supplying miniature motorbikes with unsafe design features. When asked whether he was surprised at the decision to allow Caleb Jakobsson to remain on bail with extra conditions in place, Premier Daniel Andrews told 3AW last Tuesday: “That would be a fair comment, yes.”

Safe end to balloon drama: A hot air balloon landed safely on a Mt Martha beach on Saturday (21 May) after jettisoning passengers into a boat over the water off Beaumaris. The drama began in Brighton when an attempt to land failed. The alarm was soon raised as the balloon blew across to the bayside suburb of Beaumaris and was then blown out to sea where passengers were offloaded. It then headed south, tailed by at least one helicopter, numerous vessels, and police and ambulance on land. The pilot of the balloon managed to land the balloon onto the beach in Mt Martha. Picture: Cameron McCullough

Shot fired at house A SHOT was fired into house in Langwarrin, 9.30pm, Wednesday 11 May. It is believed to have been fired from a car in the street. Detective Sergeant Gary Richards, of Frankston CIU, said a .22 calibre bullet ricocheted off a verandah post and through the lounge room window of the house in North Gateway. Neighbours thought they heard a shot at 9.30pm but the windy night made confirmation difficult. The residents were home at the time but the damage was not discovered until the next morning when glass was

Court to hear 45 charges A DROMANA man has been remanded to appear at Frankston Magistrates’ Court, 10 June, on 45 charges. The 20-year-old was arrested at a house in Excelsior Rd, Frankston, Thursday 12 May. He faces two counts of aggravated burglary, 12 of theft from motor cars, four of theft of motor cars, 19 of obtaining property by deception, and other theft charges.

Roadworks link to Ingham’s growth Stephen Taylor steve@baysidenews.com.au ROADWORKS are set to begin near the Ingham’s Enterprises factory, Somerville. Treasurer Tim Pallas visited the large-scale chicken meat producer in Grants Rd this month to discuss the economic benefits of improving nearby Golf Links Rd. The works would better cater for heavy vehicles and clear the way for a major Ingham’s expansion, resulting in significant economic benefits for

the Frankston area and the Mornington Peninsula as a whole, the treasurer said. He said this year’s budget included a $10 million package to develop business cases for upgrades to key outer suburban arterial roads around Melbourne, including Golf Links Rd. “This detailed assessment will begin this year and will look at construction estimates, preliminary designs, impact studies, geotechnical investigations, environmental and cultural heritage studies, and community consultation.” Frankston mayor Cr James Dooley

said the roads funding was “exciting news as a step towards finalising the expansion of the Somerville factory”. “We made a commitment to Ingham’s that we would advocate to the Victorian government, and this announcement has delivered both the Frankston community and Ingham’s a win,” he said. Mr Pallas said the business case would look at a future upgrade of the Golf Links and Warrandyte roads intersection as well as the Baxter-Tooradin, Grant and Warrandyte roads roundabout, and how this could enable

it to cater for B-double trucks. “Bigger trucks would allow Ingham’s to consider future expansion of their operations and create more jobs in Somerville,” Mr Pallas said. The company is reportedly the largest employer on the peninsula – with about 600 staff – and contributes about $200 million to the local economy. Cr Dooley said the announcement “was critical to not only retain these jobs, but also to increase employment opportunities within the region as a result of Ingham’s expanding their operations”.

“Ingham’s expansion depends on this vital project going ahead to allow large trucks direct access to Peninsula Link. We encourage any growth in the factory as it will provide economic growth and stable employment for the region,” the mayor said. Frankston MP Paul Edbrooke said: “Locals know that all levels of government need to support jobs, industry and manufacturing and that’s why I have advocated so strongly for this investment which will benefit Frankston and the Mornington Peninsula.”

HAD GASTRIC BANDING… STILL NOT HAPPY? Call our clinic to hear about options that may help you achieve a healthier lifestyle. Call us on (03) 9760 2777 or visit our website www.lapsurgeryaustralia.com.au Frankston Times 23 May 2016