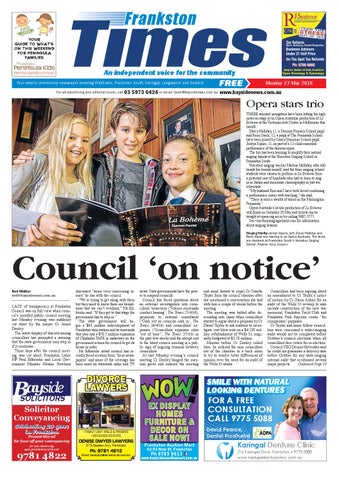 An independent voice for the community Your weekly community newspaper covering Frankston, Frankston South, Karingal, Langwarrin and Seaford For all advertising and editorial needs, call 03

Opera stars trio THREE talented youngsters have been hitting the high notes on stage at an Opera Australia production of La Boheme at the Victorian Arts Centre in Melbourne this month. Darcy Halliday, 11, a Derinya Primary School pupil and Remi Stock, 12, a pupil at The Peninsula School have been joined by Casey Grammar School pupil Jordyn Squire, 11, as part of a 12-child ensemble performance of the famous opera. The trio has been learning to amplify their natural singing talents at the Voicebox Singing School in Frankston South. Voicebox singing teacher Martine Halliday, who still treads the boards herself, said the three singing school students were chosen to perform in La Boheme from a potential cast of hundreds who had to learn to sing in in Italian and memorise choreography in just ten rehearsals. “My husband Ron and I have both loved combining a performance career with teaching,” she said. “There is such a wealth of talent on the Mornington Peninsula.” Opera Australia’s lavish production of La Boheme will finish on Saturday 28 May and tickets can be bought at opera.org.au or by calling 9685 3777. See voiceboxsingingschool.com for information about singing lessons. Singing trinity: Jordyn Squire, left, Darcy Halliday and Remi Stock are starring in an Opera Australia. The three are students at Frankston South’s Voicebox Singing School. Picture: Gary Sissons

Council ‘on notice’ Neil Walker neil@baysidenews.com.au LACK of transparency at Frankston Council was on full view when council’s monthly public council meeting last Monday evening was suddenly cut short by the mayor Cr James Dooley. The latest display of discord among councillors has prompted a warning that the state government may step in if it continues. Three days after the council meeting was cut short, Frankston Labor MP Paul Edbrooke and Local Government Minister Natalie Hutchins

discussed “some very concerning issues” he has with the council. “We’re trying to get along with them but they need to know there are boundaries that we can’t overlook,” Mr Edbooke said. “If they get to that stage the government has to step in.” The state government will begin a $63 million redevelopment of Frankston train station and its surrounds this year and a $70.5 million expansion of Chisholm TAFE is underway so the government is keen for council to get its house in order. Mr Edbrooke noted council has recently faced scrutiny from “local newspapers” and some of the coverage has been aired on statewide radio and TV

Solicitor Conveyancing &amp;ɰȵɰʍUDʤʖQɒ ɆHʋUɡ ʖɚ )UʋɻNVWʝɚ Present this ad for $100 off your conveyancing for new clients only upon presentation of this ad.

news. State governments have the power to suspend councils. Council has faced questions about an external investigation into councillors’ behaviour (‘Silence surrounds conduct hearing’, The Times 25/4/16), payments to external consultants (‘Cash out as councils cash in’, The Times 26/4/16) and councillors’ expenses (‘Councillors expenses rules ‘out of time’’, The Times 2/5/16) in the past few weeks and the abrupt end to the latest council meeting is a public sign of ongoing tensions between councillors. At last Monday evening’s council meeting Cr Dooley banged the mayoral gavel and ordered the meeting

end amid threats to expel Cr Suzette Tayler from the council chamber after she mentioned a conversation she had with him a couple of weeks before the meeting. The meeting was halted after descending into chaos when councillors started to argue about a proposal by Cr Darrel Taylor to ask auditors to investigate cost blow outs on a $4.239 million refurbishment of Wells St, originally budgeted at $3.58 million. Minutes before Cr Dooley called time, he ordered the nine councillors out of the chamber to a back room to try to resolve bitter differences of opinion over the need for an audit of the Wells St works.

Councillors had been arguing about an amendment to Cr Taylor’s notice of motion by Cr Glenn Aitken for an audit of the Wells St revamp to also include construction of the new war memorial, Frankston Yacht Club and Frankston Park function centre “for comparison” purposes. Cr Taylor and some fellow councillors were concerned a wider-ranging audit would not be completed before October’s council elections when all councillors face voters for re-election. Council CEO Dennis Hovenden said he could not guarantee a delivery date before October for any wide-ranging internal audit that scrutinised several major projects. Continued Page 10