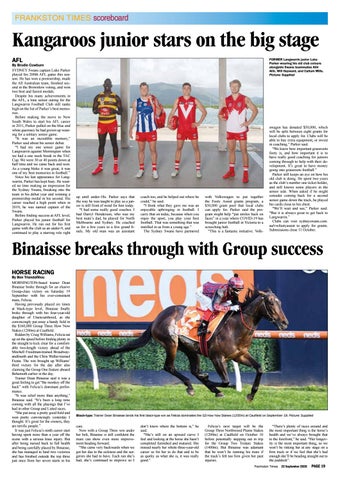 By Brodie Cowburn SYDNEY Swans captain Luke Parker played his 200th AFL game this season. He has won a premiership, made the All Australian team, finished second in the Brownlow voting, and won two best and fairest medals. Despite his many achievements in the AFL, a lone senior outing for the Langwarrin Football Club still ranks high on the list of Parker’s best memories. Before making the move to New South Wales to start his AFL career in 2011, Parker pulled on the blue and white guernsey he had grown up wearing for a solitary senior game. “It was an incredible memory,” Parker said about his senior debut. “I had my one senior game for Langwarrin against Mornington when we had a one week break in the TAC Cup. We were 30 or 40 points down at half time and we came back and won. As a young bloke it was great, it was one of my best memories in football.” Since his last appearance for Langwarrin, Parker has kept busy. He wasted no time making an impression for the Sydney Swans, breaking into the team in his debut year and winning a premiership medal in his second. His career reached a high point when in 2019, he was named captain of the Swans. Before finding success at AFL level, Parker played his junior football for Langwarrin. He ran out for his first game with the club as an under-9, and continued to play a starring role right

up until under-18s. Parker says that the way he was taught to play as a junior is still front of mind for him today. “I had some really good coaches. I had Darryl Henderson, who was my best mate’s dad, he played for North Melbourne and Sydney. He coached us for a few years to a few grand finals. My old man was an assistant

coach too, and he helped out where he could,” he said. “I think what they gave me was an enjoyable upbringing in football. I carry that on today, because when you enjoy the sport, you play your best football. That was something that was instilled in us from a young age.” The Sydney Swans have partnered

with Volkswagen to put together the Footy Assist grants program, a $50,000 grant pool that local clubs can apply for. Parker said the program might help “put smiles back on faces” in a year where COVID-19 has brought junior football in Victoria to a screeching halt. “This is a fantastic initiative. Volk-

swagen has donated $50,000, which will be split between eight grants for local clubs to apply for. Clubs will be able to buy extra equipment, or invest in coaching,” Parker said. “We know how important grassroots footy is, and how important it is to have really good coaching for juniors coming through to help with their development. It’s great to have money going into grassroots football.” Parker still keeps an eye on how his old club is doing. He spent two years as the club’s number one ticket holder, and still knows some players in the senior side. When asked if he might consider coming back for a second senior game down the track, he played his cards close to his chest. “We’ll wait and see,” Parker said. “But it is always great to get back to Langwarrin.” Clubs can visit sydneyswans.com. au/vwfootyassist to apply for grants. Submissions close 11 October.

By Ben Triandafillou MORNINGTON-based trainer Dean Binaisse broke through for an elusive Group-class victory on Saturday 19 September with his ever-consistent mare, Felicia. Having previously placed six times at black-type level, Binaisse finally broke through with his four-year-old daughter of Unencumbered, as she convincingly put away a handy field in the $160,000 Group Three How Now Stakes (1200m) at Caulfield. Ridden by Craig Williams, Felicia sat up on the speed before finding plenty in the straight to kick clear for a comfortable two-length victory ahead of the Mitchell Freedman-trained Broadwayandfourth and the Chris Waller-trained Fiesta. The win brought up Williams’ third victory for the day after also claiming the Group One feature aboard Behemoth earlier in the day. Trainer Dean Binaisse said it was a great feeling to get “the monkey off the back” with Felicia’s dominant performance. “It was relief more than anything,” Binaisse said. “It’s been a long time coming with all the placings that I’ve had in other Group and Listed races. “She put away a pretty good field and won pretty convincingly yesterday I thought. It’s great for the owners, they are terrific people.” It was just Felicia’s ninth career start having spent more than a year off the scene with a serious knee injury. But after being nursed back to full health and being carefully placed by Binaisse, she has managed to land two victories and has finished outside the top three just once from her seven starts in his

care. Now with a Group Three win under her belt, Binaisse is still confident the mare can show even more improvement heading forward. “She came very backwards when we got her due to the sickness and the surgeries she had to have. Each run she’s had, she’s continued to improve so I

don’t know where the bottom is,” he said. “She’s still on an upward curve I feel and looking at the horse she hasn’t completed furnished and matured. She missed nearly her whole three-year-old career so for her to do that and to be as quirky as what she is, it was really good.”

Felicia’s next target will be the Group Three Northwood Plume Stakes (1200m) at Caulfield on October 10 before potentially stepping out in trip for the Group Two Tristarc Stakes (1400m). But Binaisse was adamant that he won’t be running his mare if the track’s felt too firm given her past injuries.