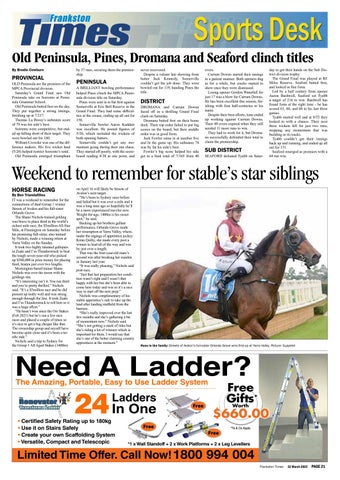 OLD Peninsula are the premiers of the MPCA Provincial division. Saturday’s Grand Final saw Old Peninsula take on Sorrento at Peninsula Grammar School. Old Peninsula batted first on the day. They put together a strong innings, finishing up at 7/217. Thomas La Brooy’s unbeaten score of 79 was his side’s best. Sorrento were competitive, but ended up falling short of their target. They were bowled out for 180. William Crowder was one of the difference makers. His five wicket haul (5/26) helped restrict Sorrento’s total. Old Peninsula emerged triumphant

by 37 runs, securing them the premiership.

A BRILLIANT bowling performance helped Pines clinch the MPCA Peninsula division title on Saturday. Pines were sent in to bat first against Somerville at Eric Bell Reserve in the Grand Final. They had some difficulties at the crease, ending up all out for 158. Somerville bowler Aaron Kaddatz was excellent. He posted figures of 5/26, which included the wickets of both opening batters. Somerville couldn’t get any momentum going during their run chase. They started off poorly, with the scoreboard reading 4/38 at one point, and

never recovered. Despite a valiant late showing from batter Jack Kennedy, Somerville couldn’t get the job done. They were bowled out for 119, handing Pines the title.

DROMANA and Carrum Downs faced off in a thrilling Grand Final clash on Saturday. Dromana batted first on their home deck. Their top order failed to put big scores on the board, but their middle order was in good form. Jack Fowler came in at number five and lit the game up. His unbeaten 74 was by far his side’s best. Fowler’s big score helped his side get to a final total of 7/165 from 40

overs. Carrum Downs started their innings in a patient manner. Both openers dug in for a while, but cracks started to show once they were dismissed. Losing opener Gordon Waterfall for just 17 was a blow for Carrum Downs. He has been excellent this season, finishing with four half-centuries to his name. Despite their best efforts, time ended up working against Carrum Downs. Their 40 overs expired when they still needed 11 more runs to win. They had to work for it, but Dromana successfully defended their total to claim the premiership.

day to get their hands on the Sub District division trophy. The Grand Final was played at RF Miles Reserve. Seaford batted first, and looked in fine form. Led by a half century from opener Aaron Bardwell, Seaford set Tyabb a target of 216 to win. Bardwell has found form at the right time - he has scored 61, 60, and 60 in his last three games. Tyabb started well and at 0/55 they looked in with a chance. Their next three wickets fell for just two runs, stopping any momentum that was building in its tracks. Tyabb couldn’t get their innings back up and running, and ended up all out for 151. Seaford emerged as premiers with a 64 run win.

By Ben Triandafillou IT was a weekend to remember for the connections of dual-Group 1 winner Streets of Avalon and his full-sister Orlando Grove. The Shane Nichols-trained gelding was brave to place third in the world’s richest mile race, the $5million All-Star Mile, at Flemington on Saturday before his promising full-sister, also trained by Nichols, made a winning return at Yarra Valley on the Sunday. It took two highly talented gallopers in Zaaki and I’m Thunderstruck to beat the tough seven-year-old who picked up $360,000 in prize money for placing third, beaten just over two lengths. Mornington-based trainer Shane Nichols was over the moon with the geldings run. “It’s interesting isn’t it. You run third and you’re pretty thrilled,” Nichols said. “It’s a $5million race and he did present up really well and was strong enough through the line. It took Zaaki and I’m Thunderstruck to roll him so it was a huge effort.” “He hasn’t won since the Orr Stakes (Feb 2021) but he’s run a few nice races and placed a couple of times so it’s nice to get a big cheque like that. The ownership group and myself have become quite close and it’s been a terrific ride.” Nichols said a trip to Sydney for the Group 1 All Aged Stakes (1400m)

on April 16 will likely be Streets of Avalon’s next target. “He’s been to Sydney once before and failed but it was over a mile and it was a long time ago so hopefully he’ll be a more experienced traveler now. Weight-for-age, 1400m is his sweet spot,” he said. Backing up her brothers gallant performance, Orlando Grove made her resumption at Yarra Valley, where, under the urgings of apprentice jockey Kiran Quilty, she made every post a winner to lead all of the way and win by just over a length. That was the four-year-old mare’s second win after breaking her maiden in January last year. “It was really pleasing,” Nichols said post-race. “Just that last preparation her condition wasn’t right and I wasn’t that happy with her but she’s been able to come here today and win so it’s a nice way to start off the new prep.” Nichols was complimentary of his stable apprentice’s ride to take up the lead after landing midfield from the barriers. “She’s really improved over the last few months and she’s gathering a bit of momentum now,” Nichols said. “She’s not getting a stack of rides but she’s riding a lot of winners which is important for them. I would say that she’s one of the better claiming country apprentices at the moment.”

Need A Ladder? The Amazing, Portable, Easy to Use Ladder System Free

• Certified Safety Rating up to 180kg • Use it on Stairs Safely • Create your own Scaffolding System • Versatile, Compact and Telescopic