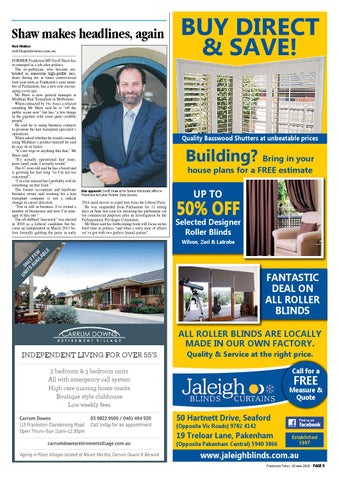 Shaw makes headlines, again Neil Walker neil@baysidenews.com.au FORMER Frankston MP Geoff Shaw has re-emerged in a job after politics. The ex-politician, who became embroiled in numerous high-profile incidents during his at times controversial four-year term as Frankston’s state member of Parliament, has a new role encouraging cover ups. Mr Shaw is now general manager at Medihair Hair Transplant in Melbourne. When contacted by The Times a relaxed sounding Mr Shaw said he is “off the public scene now” but has “a few things in the pipeline with some quite credible people”. He said he is using business contacts to promote the hair transplant specialist’s operations. When asked whether he would consider using Medihair’s product himself he said he may do in future. “It’s not wigs or anything like that,” Mr Shaw said. “It’s actually operational hair transports [and] yeah, I actually would.” The 47-year-old said he has a beard and is growing his hair long “so I’m not too concerned”. “I’m a bit relaxed but I probably will do something on that front.” The former accountant and hardware business owner said working for a hair transplant company is not a radical change in career direction. “You’re still in business. I’ve owned a number of businesses and now I’m manager of this one.” The oft dubbed “maverick” was elected in 2010 as a Liberal candidate but became an independent in March 2013 before formally quitting the party in early

2014 amid moves to expel him from the Liberal Party. He was suspended from Parliament for 11 sitting days in June last year for misusing his parliament car for commercial purposes after an investigation by the Parliamentary Privileges Committee. Mr Shaw said his forthcoming book will focus on his brief time in politics “and what a sorry state of affairs we’ve got with two gutless [main] parties”.

ALL ROLLER BLINDS ARE LOCALLY MADE IN OUR OWN FACTORY. Quality &amp; Service at the right price.