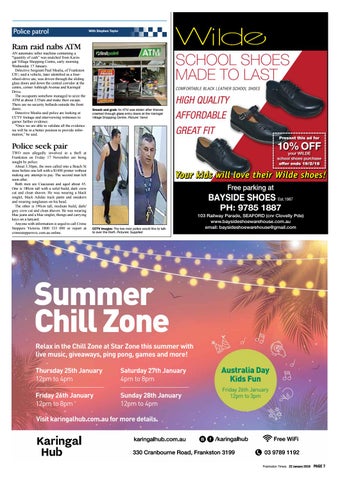 AN automatic teller machine containing a “quantity of cash” was snatched from Karingal Village Shopping Centre, early morning Wednesday 17 January. Detective Sergeant Paul Mealia, of Frankston CIU, said a vehicle, later identified as a fourwheel-drive ute, was driven through the sliding glass doors and down the central corridor at the centre, corner Ashleigh Avenue and Karingal Drive. The occupants somehow managed to seize the ATM at about 3.55am and make their escape. There are no security bollards outside the front doors. Detective Mealia said police are looking at CCTV footage and interviewing witnesses to garner further evidence. “Once we are able to validate all the evidence we will be in a better position to provide information,” he said.

Smash and grab: An ATM was stolen after thieves crashed through glass entry doors at the Karingal Village Shopping Centre. Picture: Yanni

Present this ad for

TWO men allegedly involved in a theft at Frankston on Friday 17 November are being sought by police. About 3.50pm, the men called into a Beach St store before one left with a $1400 printer without making any attempt to pay. The second man left soon after. Both men are Caucasian and aged about 45. One is 180cm tall with a solid build, dark crew cut and clean shaven. He was wearing a black singlet, black Adidas track pants and sneakers and wearing sunglasses on his head. The other is 190cm tall, medium build, dark/ grey crew cut and clean shaven. He was wearing blue jeans and a blue singlet, thongs and carrying keys on a lanyard. Anyone with information is urged to call Crime Stoppers Victoria 1800 333 000 or report at crimestoppersvic.com.au online.

Your kids will love their Wilde shoes! Free parking at

CCTV images: The two men police would like to talk to over the theft. Pictures: Supplied