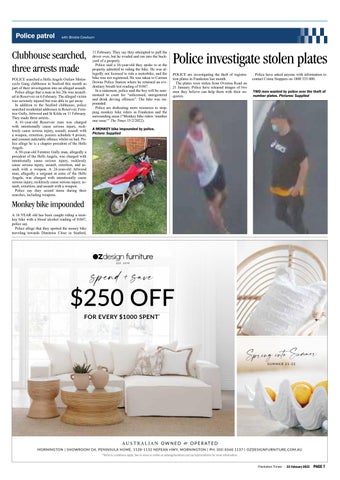 11 February. They say they attempted to pull the driver over, but he evaded and ran into the backyard of a property. Police said a 16-year-old they spoke to at the property admitted to riding the bike. He was allegedly not licensed to ride a motorbike, and the bike was not registered, He was taken to Carrum Downs Police Station where he returned an evidentiary breath test reading of 0.047. In a statement, police said the boy will be summonsed to court for “unlicensed, unregistered and drink driving offences”. The bike was impounded. Police are dedicating more resources to stopping monkey bike riders in Frankston and the surrounding areas (“Monkey bike riders ‘number one issue’” The Times 15/2/2022).

Police investigate stolen plates POLICE are investigating the theft of registration plates in Frankston last month. The plates were stolen from Overton Road on 21 January. Police have released images of two men they believe can help them with their enquiries.

Police have asked anyone with information to contact Crime Stoppers on 1800 333 000. TWO men wanted by police over the theft of number plates. Pictures: Supplied

Monkey bike impounded A 16 YEAR old has been caught riding a monkey bike with a blood alcohol reading of 0.047, police say. Police allege that they spotted the money bike traveling towards Dimitrios Close in Seaford,