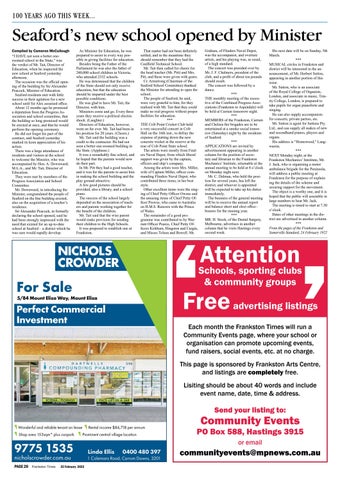 Seaford’s new school opened by Minister Compiled by Cameron McCullough “I HAVE not seen a better oneroomed school in the State,” was the verdict of Mr. Tait, Director of Education, when he inspected the new school at Seaford yesterday afternoon. The occasion was the official opening of the building by Sir Alexander Peacock, Minister of Education. Seaford residents met with little success in their agitation for a new school until Sir Alex assumed office. About 12 months ago he promised a deputation from the Progress Association and school committee, that the building so long promised would be erected at once, and that he would perform the opening ceremony. He did not forget his part of the contract, and Seaford yesterday marked its keen appreciation of his action. There was a large attendance of residents and visitors at the school to welcome the Minister, who was accompanied by Hon. A. Downward, M.L.A., and Mr. Tait, Director of Education. They were met by members of the Progress Association and School Committee. Mr. Downward, in introducing the Minister, congratulated the people of Seaford on the fine building erected, also on the acquisition of a teacher’s residence. Sir Alexander Peacock, in formally declaring the school opened, said he had been strongly impressed with the need that existed for an up-to-date school at Seaford – a district which he was sure would rapidly develop.

As Minister for Education, he was prepared to assist in every way possible in giving facilities for education. Besides being the Father of the Parliament he was also the father of 240,000 school children in Victoria, who attended 2332 schools. He was determined that the children of the State should not only receive education, but that the education should be imparted under the best possible conditions. He was glad to have Mr. Tait, the Director, with him. Ministers come and go. Every three years they receive a political electric shock. (Laughter.) Directors of Education, however, went on for ever. Mr. Tait had been in his position for 20 years. (Cheers.) Mr. Tait said the building was a credit to the contractor. He had not seen a better one-roomed building in the State. (Applause.) It was a remarkably fine school, and he hoped that the parents would now do their part. In Mr. Pitt they had a good teacher, and it was for the parents to assist him in making the school building and the play ground attractive. A few good pictures should be provided, also a library, and a school piano. The success of the school largely depended on the association of teachers and parents working together for the benefit of the children. Mr. Tait said that the wise parent would make provision for sending their children to the High Schools. It was proposed to establish one at Frankston.

That matter had not been definitely settled, and in the meantime they should remember that they had the Caulfield Technical School. Mr. Tait then called for cheers for the head teacher (Mr. Pitt) and Mrs. Pitt, and these were given with gusto. Cr. Armstrong (Chairman of the Seaford School Committee) thanked the Minister for attending to open the school. The people of Seaford, he said, were very grateful to him, for they realised with Mr. Tait that they could make no real progress without proper facilities for education. *** THE Crib Point Cricket Club held a very successful concert in Crib Hall on the 16th inst., to defray the expense of putting down the new concrete wicket in the reserve at the rear of Crib Point State school. The artists were mostly from Finders Naval Depot, from which liberal support was given by the captain, officers and ship’s company. Among the artists were Mrs. Miller, wife of Captain Miller, officer commanding Flinders Naval Depot, who contributed three items, in her best style. Other excellent items were the singing of Chief Petty Officer Owens and the amusing items of Chief Petty Officer Prowse, who came to Australia on H.M.S. Renown with the Prince of Wales. The remainder of a good programme was contributed to by Warrant Officer Pearce, Chief Petty Officers Kirkham, Hingston and Cargin, and Misses Tolson and Bowell. Mr.

Graham, of Flinders Naval Depot, was the accompanist, and overture artists, and his playing was, as usual, of a high standard. The concert was presided over by Mr. J. F. Chalmers, president of the club, and a profit of about ten pounds should result. The concert was followed by a dance. *** THE monthly meeting of the executive of the Combined Progress Associations (Frankston to Aspendale) will be held at Carrum tomorrow night. *** MEMBERS of the Frankston, Carrum and Chelsea fire brigades are to be entertained at a smoke social tomorrow (Saturday) night by the residents of Seaford. *** APPLICATIONS are invited by advertisement appearing in another column for the position of secretary and librarian to the Frankston Mechanics’ Institute, returnable at the annual meeting to be held at 8 o’clock on Monday night next. Mr. C. Dalman, who held the position for several years, has left the district, and whoever is appointed will be expected to take up his duties immediately. The business of the general meeting will be to receive the annual report and balance sheet and elect office– bearers for the ensuing year. *** MR. H. Stock, of the Dental Surgery, Melbourne, advertises in another column that he visits Hastings every second week.

His next date will be on Sunday, 5th March. *** MUSICAL circles in Frankston and district will be interested in the announcement, of Mr. Herbert Sutton, appearing in another portion of this issue. Mr. Sutton, who is an associate of the Royal College of Organists, London, and associate in music, Trinity College, London, is prepared to take pupils for organ pianoforte and singing. He can also supply accompanists for concerts, private parties, etc. Mr. Sutton is agent for Suttons Pty. Ltd., and can supply all makes of new and secondhand pianos, players and organs. His address is “Homewood,” Langwarrin. *** NEXT Monday night, at the Frankston Mechanics’ Intstitute, Mr. J. Jack, who is organising a motor ambulance brigade for the Peninsula, will address a public meeting at Frankston for the purpose of explaining the details of the scheme and securing support for the movement. The object is a worthy one, and it is hoped that the public will assemble in large numbers to hear Mr. Jack. The meeting is timed to start at 7.30 o’clock. Dates of other meetings in the district are advertised in another column. *** From the pages of the Frankston and Somerville Standard, 24 February 1922

Each month the Frankston Times will run a Community Events page, where your school or organisation can promote upcoming events, fund raisers, social events, etc. at no charge. This page is sponsored by Frankston Arts Centre, and listings are completely free. Lisiting should be about 40 words and include event name, date, time &amp; address.