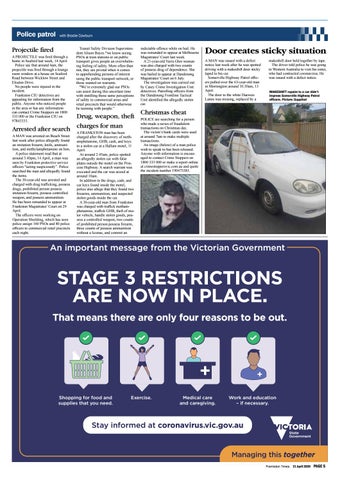 Projectile fired A PROJECTILE was fired through a home in Seaford last week, 14 April. Police say that around 4am, the projectile was fired through a lounge room window at a house on Seaford Road between Wicklow Street and Elisdon Drive. No people were injured in the incident. Frankston CIU detectives are appealing for information from the public. Anyone who noticed people in the area or has any information can contact Crime Stoppers on 1800 333 000 or the Frankston CIU on 97845555.

Transit Safety Division Superintendent Alison Boyes “we know seeing PSOs at train stations or on public transport gives people an overwhelming feeling of safety. More often than not, they are pivotal when it comes to apprehending persons of interest using the public transport network, or those wanted on warrants. “We’re extremely glad our PSOs can assist during this uncertain time with instilling those same perceptions of safety to commercial areas and retail precincts that would otherwise be teeming with people.”

Drug, weapon, theft for man Arrested after search charges A FRANKSTON man has been A MAN was arrested on Beach Street last week after police allegedly found an imitation firearm, knife, ammunition, and methylamphetamine on him. A police statement read that at around 5.40pm, 14 April, a man was seen by Frankston protective service officers “acting suspiciously”. Police searched the man and allegedly found the items. The 30-year-old was arrested and charged with drug trafficking, possess drugs, prohibited person possess imitation firearm, possess controlled weapon, and possess ammunition. He has been remanded to appear at Frankston Magistrates’ Court on 29 April. The officers were working on Operation Shielding, which has seen police assign 160 PSOs and 80 police officers to commercial retail precincts each night.

charged after the discovery of methamphetamine, GHB, cash, and keys to a stolen car at a Hallam motel, 11 April. At around 2.45am, police spotted an allegedly stolen car with false plates outside the motel on the Princess Highway. A search warrant was executed and the car was seized at around 10am. In addition to the drugs, cash, and car keys found inside the motel, police also allege that they found two firearms, ammunition, and suspected stolen goods inside the car. A 30-year-old man from Frankston was charged with traffick methamphetamine, traffick GHB, theft of motor vehicle, handle stolen goods, possess a controlled weapon, two counts of prohibited person possess firearm, three counts of possess ammunition without a license, and commit an

indictable offence while on bail. He was remanded to appear at Melbourne Magistrates’ Court last week. A 21-year-old Yarra Glen woman was also charged with two counts of possess drug of dependence. She was bailed to appear at Dandenong Magistrates’ Court on 6 July. The investigation was carried out by Casey Crime Investigation Unit detectives. Patrolling officers from the Dandenong Frontline Tactical Unit identified the allegedly stolen car.

Door creates sticky situation A MAN was issued with a defect notice last week after he was spotted driving with a makeshift door sticky taped to his car. Somerville Highway Patrol officers pulled over the 63-year-old man in Mornington around 10.30am, 13 April. The door to the white Daewoo Lanos was missing, replaced by a

makeshift door held together by tape. The driver told police he was going to Western Australia to visit his sister, who had contracted coronavirus. He was issued with a defect notice.

Christmas cheat POLICE are searching for a person who made a series of fraudulent transactions on Christmas day. The victim’s bank cards were used at around 7am to make multiple transactions. An image (below) of a man police wish to speak to has been released. Anyone with information is encouraged to contact Crime Stoppers on 1800 333 000 or make a report online at crimestoppersvic.com.au and quote the incident number 190473381.

An important message from the Victorian Government

STAGE 3 RESTRICTIONS ARE NOW IN PLACE. That means there are only four reasons to be out.

Shopping for food and supplies that you need.

Work and education – if necessary.