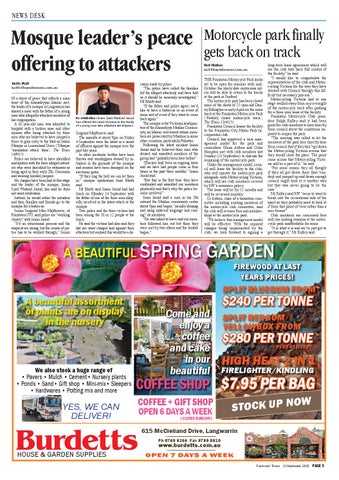 Mosque leader’s peace offering to attackers Keith Platt keith@baysidenews.com.au IN a show of peace that reflects a main tenet of the Ahmadiyyan Islamic sect, the leader of a mosque in Langwarrin has shared a meal with the father of a young man who allegedly attacked members of his congregation. A 61-year-old man was admitted to hospital with a broken nose and other injuries after being attacked by three men who are believed to have jumped a fence to gain entry to the Bait-ul-Salam Mosque in Leisureland Drive (‘Mosque ‘mauraders attack three’, The Times 14/9/15). Police are believed to have identified and spoken with the three alleged intruders who were described by witnesses as being aged in their early 20s, Caucasian and wearing hooded jumpers. No charges have been laid at this stage and the leader of the mosque, Imam Syed Wadood Janud, has said he does not want retribution. Instead, he would rather the intruders and their families and friends go to the mosque for a barbecue. Senior Sergeant Miro Majftorovic, of Frankston CIU, said police are “working closely” with Imam Janud. ”It’s an educational process and the suspects are young, but the course of justice has to be worked through,” Senior

cision made by police. “The police have called the families [of the alleged attackers] and have told us it should be seriously investigated,” Mr Bhatti said. “If the father and police agree, we’d like to have a barbecue or an event of some sort of event if they want to come back again.” The mosque is the Victorian headquarters of the Ahmadiyya Muslim Community, an Islamic movement whose members are persecuted by Muslims in some other countries, particularly Pakistan. Following the latest incident Imam Janud said he believed three men who abused and assaulted members of the group had “probably been here before”. “[Racism has] been an ongoing issue and we have had people come in four times in the past three months,” Imam Janud said. “But this is the first time they have confronted and assaulted our members physically and that’s why the police became involved.” Iman Janud said a man in his 20s entered the Muslim community centre about 9pm and began “racially abusing and using indecent language and cursing” its members. “He was asked to leave and our members followed him out but there they were met by two others and the trouble began.”

No retribution: Imam Syed Wadood Janud has offered the hand of peace to the family of a young man who attacked worshippers.

Sergeant Majftorovic said. The assaults at about 9pm on Friday 4 September were the latest in a series of offences against the mosque over the past two years. In other incidents, bottles have been thrown and worshippers abused by intruders in the grounds of the mosque and sensors have been damaged on the electronic gates. “If they ring the bell we can let them in,” mosque spokesman Aziz Bhatti said. Mr Bhatti said Imam Janud had had lunch on Monday 14 September with the father of one of the three men allegedly involved in the latest attack at the mosque. Two police and the three victims had been among the 10 or 12 people at the lunch. He said the victims had also said they did not want charges laid against their attackers but realised this would be a de-

Motorcycle park finally gets back on track Neil Walker neil@baysidenews.com.au THE Frankston Motorcycle Park looks set to be open for summer with midOctober the likely date motocross riders will be able to return to the tracks at the park in Seaford. The motorcycle park has been closed since of the death of 25-year-old Danny Edlington in early April on the main track at the Frankston Motorcycle Park (‘Fatality closes motorcycle track’, The Times 13/4/15). Frankston Council leases the facility to the Frankston City Motor Park Incorporated club. Council has approved a new management model for the park and councillors Glenn Aitken and Colin Hampton met with club members last Sunday (13 September) to discuss the reopening of the motorcycle park. Under the management model, council will lease the facility to the club, who will operate the motorcycle park alongside with Motorcycling Victoria, which will see club members covered by MV’s insurance policy. The lease will be for 11 months and will be reviewed monthly. Cr Aitken, chair of a transition committee including existing members of the motorcycle club committee, said the club will oversee fees and memberships at the motorcycle park. “We believe this management model will be effective. With the required changes being implemented by the club, we look forward to signing a

long-term lease agreement which will see the club take back full control of the facility,” he said. “I would like to congratulate the representatives of the club and Motorcycling Victoria for the way they have worked with Council through this difficult but necessary process.” Motorcycling Victoria had at one stage walked away from any oversight of the motorcycle track after pushing for a three-year lease at the facility. Frankston Motorcycle Club president Ralph Ridley said it had been good for club members to hear directly from council about the conditions imposed to reopen the park. “The meeting was called to let the members of the park here directly hear from council that if they don’t go down the Motorcycling Victoria avenue that they would close the place. The point came across that Motorcycling Victoria will be a part of it,” he said. “For some reason they all thought if they all got down there [last Sunday] and jumped up and down enough council might look at it another way but that was never going to be the case.” Mr Ridley said MV “seem to want to break into the recreational side of the sport so they probably need to look at it from that point of view rather than a race format”. Club members are concerned fees will rise making sessions at the motorcycle park unaffordable for some. “It is what it is and we’ve just got to get through it,” Mr Ridley said.

A beautiful assortment of plants are on display in the nursery