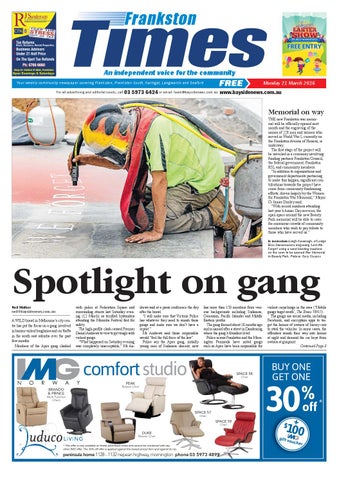 Memorial on way THE new Frankston war memorial will be officially opened next month and the engraving of the names of 228 men and women who served in World War I, currently on the Frankston Avenue of Honour, is underway. The first stage of the project will be unveiled in a ceremony involving funding partners Frankston Council, the federal government, Frankston RSL and community members. “In addition to organisations and government departments partnering to make this happen, significant contributions towards the project have come from community fundraising efforts, driven largely by the Women for Frankston War Memorial,” Mayor Cr James Dooley said. “With record numbers attending last year’s Anzac Day services, the open space around the new Beauty Park memorial will be able to cater for enormous crowds of community members who wish to pay tribute to those who have served us.” In memoriam: Leigh Kavanagh, of Lodge Bros Stonemasons engraving ‘Lest We Forget’ using a sand blasting machine on the soon to be opened War Memorial in Beauty Park. Picture: Gary Sissons

Spotlight on gang Neil Walker neil@baysidenews.com.au A WILD brawl in Melbourne’s city centre has put the focus on a gang involved in brazen violent burglaries and car thefts in the south east suburbs over the past few months. Members of the Apex gang clashed

drews said at a press conference the day after the brawl. “I will make sure that Victoria Police has whatever they need to smash these gangs and make sure we don’t have a repeat.” Mr Andrews said those responsible would “feel the full force of the law”. Police say the Apex gang, initially young men of Sudanese descent, now

with police at Federation Square and surrounding streets last Saturday evening (12 March) as terrified bystanders attending the Moomba Festival fled for safety. The high-profile clash caused Premier Daniel Andrews to vow to get tough with violent gangs. “What happened on Saturday evening was completely unacceptable,” Mr An-

has more than 150 members from various backgrounds including Sudanese, Caucasian, Pacific Islander and Middle Eastern youths. The gang formed about 18 months ago and is named after a street in Dandenong where the gang’s founders lived. Police across Frankston and the Mornington Peninsula have noted gangs such as Apex have been responsible for

violent carjackings in the area (‘Mobile gangs target south’, The Times 7/9/15). The gangs use social media, including Facebook, and encryption apps to target the homes of owners of luxury cars to steal the vehicles. In some cases, the offenders smash their way into homes at night and demand the car keys from owners at gunpoint. Continued Page 8

BUY ONE GET ONE

* This offer is only available on these h advertised d d chairs h and d cannot be combined with an ny other IMG offer. The 30% off offer is applied against the lowest priced item and against st its rrp.