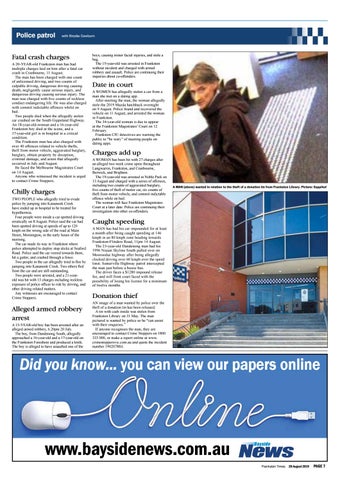 Fatal crash charges A 20-YEAR-old Frankston man has had multiple charges laid on him after a fatal car crash in Cranbourne, 11 August. The man has been charged with one count of unlicensed driving, and two counts of culpable driving, dangerous driving causing death, negligently cause serious injury, and dangerous driving causing serious injury. The man was charged with five counts of reckless conduct endangering life. He was also charged with commit indictable offences whilst on bail. Two people died when the allegedly stolen car crashed on the South Gippsland Highway. An 18-year-old-woman and a 16-year-old Frankston boy died at the scene, and a 17-year-old girl is in hospital in a critical condition. The Frankston man has also charged with over 40 offences related to vehicle thefts, theft from motor vehicle, aggravated burglary, burglary, obtain property by deception, criminal damage, and arson that allegedly occurred in July and August. He faced the Melbourne Magistrates Court on 14 August. Anyone who witnessed the incident is urged to contact Crime Stoppers.

Chilly charges TWO PEOPLE who allegedly tried to evade police by jumping into Kananook Creek have ended up in hospital to be treated for hypothermia. Four people were inside a car spotted driving erratically on 8 August. Police said the car had been spotted driving at speeds of up to 120 kmph on the wrong side of the road at Main Street, Mornington, in the early hours of the morning. The car made its way to Frankston where police attempted to deploy stop sticks at Seaford Road. Police said the car veered towards them, hit a gutter, and crashed through a fence. Two people in the car allegedly tried to flee by jumping into Kananook Creek. Two others fled from the car and are still outstanding. Two people were arrested, and a 21-yearold was hit with 15 charges including reckless exposure of police officer to risk by driving, and other driving related matters. Any witnesses are encouraged to contact Crime Stoppers.

Alleged armed robbery arrest A 15-YEAR-old boy has been arrested after an alleged armed robbery, 6.20pm 20 July. The boy, from Dandenong South, allegedly approached a 16-year-old and a 17-year-old on the Frankston Foreshore and produced a knife. The boy is alleged to have assaulted one of the

boys, causing minor facial injuries, and stole a bag. The 15-year-old was arrested in Frankston without incident and charged with armed robbery and assault. Police are continuing their inquiries about co-offenders.

Date in court A WOMEN has allegedly stolen a car from a man she met on a dating app. After meeting the man, the woman allegedly stole the 2019 Mazda hatchback overnight on 9 August. Police found and recovered the vehicle on 11 August, and arrested the woman in Frankston. The 34-year-old woman is due to appear at the Frankston Magistrates’ Court on 12 February. Frankston CIU detectives are warning the public to “be wary” of meeting people on dating apps.

Charges add up A WOMAN has been hit with 27 charges after an alleged two week crime spree throughout Langwarrin, Frankston, and Cranbourne, Berwick, and Brighton. The 19-year-old was arrested in Noble Park on 13 August and charged with a series of offences, including two counts of aggravated burglary, five counts of theft of motor car, six counts of theft from motor vehicle, and commit indictable offence while on bail. The woman will face Frankston Magistrates Court at a later date. Police are continuing their investigation into other co-offenders.

A MAN (above) wanted in relation to the theft of a donation tin from Frankston Library. Picture: Supplied

Caught speeding A MAN has had his car impounded for at least a month after being caught speeding at 146 kmph in an 80 kmph zone heading towards Frankston-Flinders Road, 11pm 14 August. The 23-year-old Dandenong man had his 1996 Nissan Skyline South pulled over on Moorooduc highway after being allegedly clocked driving over 60 kmph over the speed limit. Somerville Highway patrol intercepted the man just before a booze bus. The driver faces a $1280 impound release fee, and will front court faced with the possibility of losing his license for a minimum of twelve months.

Donation thief AN image of a man wanted by police over the theft of a donation tin has been released. A tin with cash inside was stolen from Frankston Library on 31 May. The man pictured is wanted by police so he “can assist with their enquiries.’’ If anyone recognises the man, they are encouraged to contact Crime Stoppers on 1800 333 000, or make a report online at www. crimestoppersvic.com.au and quote the incident number 190207884.