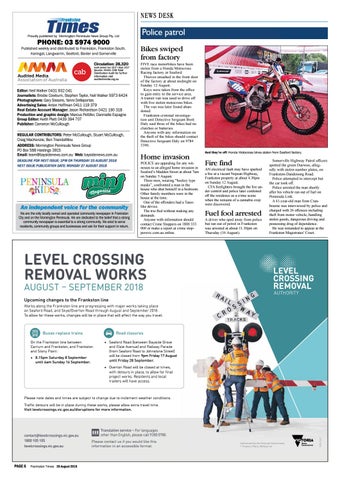 FIVE race motorbikes have been stolen from a Honda Motocross Racing factory in Seaford. Thieves smashed in the front door of the factory at about midnight on Sunday 12 August. Keys were taken from the office to gain entry to the service area. A transit van was used to drive off with five stolen motocross bikes. The van was later found abandoned. Frankston criminal investigation unit Detective Sergeant Brett Daly said three of the bikes had no clutches or batteries. Anyone with any information on the theft of the bikes should contact Detective Sergeant Daly on 9784 5590.

POLICE are appealing for any witnesses to an alleged home invasion in Seaford’s Madden Street at about 7am on Sunday 5 August. Three men, wearing “hockey type masks”, confronted a man in the house who shut himself in a bedroom. Other family members were in the house at the time. One of the offenders had a Taserlike device. The trio fled without making any demands. Anyone with information should contact Crime Stoppers on 1800 333 000 or make a report at crime stoppersvic.com.au online.

And they’re off: Honda Motocross bikes stolen from Seaford factory.

AN electrical fault may have sparked a fire at a vacant Nepean Highway, Frankston property at about 4.30pm on Sunday 12 August. CFA firefighters brought the fire under control and police later cordoned off the residence as a crime scene when the remains of a cannabis crop were discovered.

A driver who sped away from police but ran out of petrol in Frankston was arrested at about 11.30pm on Thursday (16 August).

Somerville Highway Patrol officers spotted the green Daewoo, allegedly with stolen number plates, on Frankston-Dandenong Road. Police attempted to intercept but the car took off. Police arrested the man shortly after his vehicle ran out of fuel on Peninsula Link. A 41-year-old man from Cranbourne was interviewed by police and charged with 26 offences including theft from motor vehicle, handling stolen goods, dangerous driving and possessing drug of dependence. He was remanded to appear at the Frankston Magistrates’ Court.

Works along the Frankston line are progressing with major works taking place on Seaford Road, and Skye/Overton Road through August and September 2018. To allow for these works, changes will be in place that will affect the way you travel.

• Seaford Road (between Bayside Grove and Elsie Avenue) and Railway Parade (from Seaford Road to Johnstone Street) will be closed from 9pm Friday 17 August until Friday 28 September. • Overton Road will be closed at times, with detours in place, to allow for final project works. Residents and local traders will have access.

Please note dates and times are subject to change due to inclement weather conditions. Traffic detours will be in place during these works, please allow extra travel time. Visit levelcrossings.vic.gov.au/disruptions for more information.