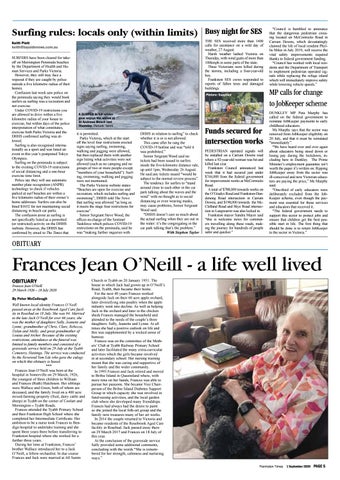 Surfing rules: locals only (within limits) Busy night for SES THE SES received more than 1400 calls for assistance on a wild day of weather, 27 August. Harsh weather lashed Victoria on Thursday, with wind gusts of more than 100kmph in some parts of the state. Three Victorians were killed during the storms, including a four-year-old boy. Frankston SES crews responded to reports of fallen trees and damaged buildings.

Keith Platt keith@baysidenews.com.au SURFERS have been cleared for takeoff on Mornington Peninsula beaches by the Department of Health and Human Services and Parks Victoria. However, they still may face a wipeout if they are caught by police outside a five kilometre radius of their homes. Confusion last week saw police on the peninsula saying they would book surfers as surfing was a recreation and not exercise. Under COVID-19 restrictions you are allowed to drive within a five kilometre radius of your house to exercise, but within days of the police interpretation of what constitutes, exercise both Parks Victoria and the DHHS confirmed surfing was allowed. Surfing is also recognised internationally as a sport and was listed an event in this year’s postponed Tokyo Olympics. Surfing on the peninsula is subject to the existing COVID-19 restrictions of social distancing and a one-hour exercise time limit. Police say they will use automatic number plate recognition (ANPR) technology to check if vehicles parked at surf beaches are within a five kilometre radius of their owner’s home addresses. Surfers can also be fined $1652 for not maintaining social distancing in beach car parks. The confusion arose as surfing is not specifically listed as a permitted (or restricted) activity on the DHHS website. However, the DHHS has confirmed by email to The Times that

it is permitted. Parks Victoria, which at the start off the level four restrictions erected signs saying surfing, swimming, walking and jogging were allowed, but then replaced them with another sign listing what activities were not allowed (such as no camping and no groups of two or more people except “members of your household”). Surfing, swimming, walking and jogging were not mentioned. The Parks Victoria website states: “Beaches are open for exercise and recreation, which includes surfing and swimming”; DHHS told The News that surfing was allowed “as long as it meets the stage four restrictions for exercise”. Senior Sergeant Steve Wood, the officer-in-charge of the Sentinel Taskforce which polices COVID-19 restrictions on the peninsula, said he was “making further inquiries with

DHHS in relation to surfing” to check whether it is or is not allowed. This came after he rang the COVID-19 hotline and was “told it was prohibited.” Senior Sergeant Wood said no tickets had been issued to surfers inside the five-kilometre distance rule, up until 1pm, Wednesday 26 August. He said any tickets issued “would be subject to the normal review process”. The tendency for surfers to “stand around close to each other in the car park talking about the waves and the wind” with no thought as to social distancing or even wearing masks, may cause problems, Senior Sergeant Wood said. “DHHS doesn’t care so much about the actual surfing when they are out in the water: it’s the congregating in the car park talking that’s the problem.” With Stephen Taylor

Funds secured for intersection works PEDESTRIAN operated signals will be installed on a Carrum Downs road where a 92-year-old woman was hit and killed last year. Frankston Council announced last week that it had secured just under $744,000 from the federal government for improvement works at McCormicks Road. A total of $788,000 towards works on the O’Gradys Road and Frankston-Dandenong Road intersection in Carrum Downs, and $198,000 towards the McClelland Road and Skye Road intersection in Langwarrin was also locked in. Frankston mayor Sandra Mayer said “this is welcome news for commuters travelling along these roads, making the journey for hundreds of people safer and quicker.”

“Council is humbled to announce that the dangerous pedestrian crossing located on McCormicks Road in Carrum Downs, which devastatingly claimed the life of local resident Phyllis Miles in July 2019, will receive the vital safety improvements required thanks to federal government funding. “Council has worked with local residents and the Department of Transport to implement pedestrian operated signals while replacing the refuge island which will immediately improve safety while lowering vehicle speeds.”

MP calls for change to JobKeeper scheme DUNKLEY MP Peta Murphy has called on the federal government to reinstate JobKeeper payments to early childhood educators. Ms Murphy says that the sector was removed from JobKeeper eligibility on 20 July, and that it must be reinstated “immediately”. “We have heard over and over again about educators being stood down or losing pay during the lockdown, including here in Dunkley. The Prime Minister’s employment guarantee isn’t worth the paper it’s written on. Ripping JobKeeper away from the sector was ill-conceived and now Victorian educators are paying the price,” Ms Murphy said. “One-third of early educators were deliberately excluded from the JobKeeper scheme, even though the payment was essential for those services and educators that received it. “The federal government needs to support this sector to protect jobs and ensure that children get the best possible start in life. The first thing that should be done is to return JobKeeper to the sector in Victoria.”

Frances Jean O’Neill 29 March 1926 – 18 July 2020 By Peter McCullough Well known local identity Frances O’Neill passed away at the Rosebrook Aged Care facility in Rosebud on 18 July. She was 94. Married to the late Jack O’Neill for over 66 years, she was the mother of daughters Sally, Jeanette and Lynne; grandmother of Chris, Clare, Rebecca, Dylan and Molly; and great grandmother of Louisa and Archer. Because of the existing restrictions, attendance at the funeral was limited to family members and consisted of a graveside service held on 29 July at the Tyabb Cemetery, Hastings. The service was conducted by the Reverend Tom Ede who gave the eulogy on which this obituary is based. *** Frances Jean O’Neill was born at the hospital in Somerville on 29 March, 1926, the youngest of three children to William and Frances (Ruth) Hutchison. Her siblings were Wallace and Gwen, both of whom are deceased, and the family lived on a 400 acre mixed-farming property (fruit, dairy cattle and sheep) in Tyabb on the corner of Coolart and Mornington – Tyabb Roads. Frances attended the Tyabb Primary School and then Frankston High School where she completed her Intermediate Certificate. Her ambition to be a nurse took Frances to Bendigo hospital to undertake training and she spent three years there before transferring to Frankston hospital where she worked for a further three years. During her time at Frankston, Frances’ brother Wallace introduced her to a Jack O’Neill, a fellow orchardist. In due course Frances and Jack were married at All Saints

Church in Tyabb on 20 January 1951. The house in which Jack had grown up in O’Neill’s Road, Tyabb, then became their home. For the next 40 years Frances worked alongside Jack on their 60 acre apple orchard, later diversifying into poultry when the apple industry went into decline. As well as helping Jack in the orchard and later in the chicken sheds Frances managed the household and attended to the needs of the couple’s three daughters: Sally, Jeanette and Lynne. At all times she had a positive outlook on life and this was supplemented by a wicked sense of humour. Frances was on the committee of the Mothers’ Club at Tyabb Railway Primary School and later facilitated the many extra-curricular activities which the girls became involved in at secondary school. Her nursing training meant that she was caring and supportive of her family and the wider community. In 1993 Frances and Jack retired and moved to Bribie Island in Queensland where, with more time on her hands, Frances was able to pursue her passions. She became Vice Chairperson of the Bribie Island Diabetes Support Group in which capacity she was involved in fund-raising activities, and the local garden club where she developed many friendships. Frances had always had the desire to paint so she joined the local folk-art group and the family now treasures many of her art works. In 2014 the couple returned to Victoria and became residents of the Rosebrook Aged Care facility in Rosebud. Jack passed away there on 29 March 2017 and Frances on 18 July of this year. At the conclusion of the graveside service Sally provided some additional comments, concluding with the words “She is remembered for her strength, calmness and nurturing ways.” Frankston Times