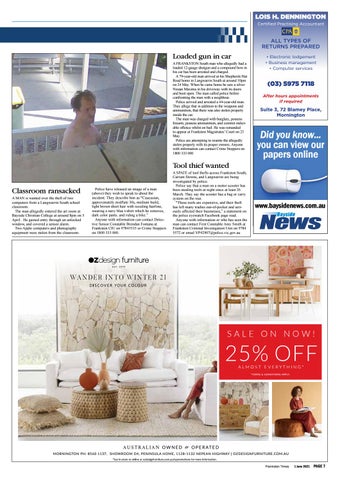 ALL TYPES OF RETURNS PREPARED

Loaded gun in car A FRANKSTON South man who allegedly had a loaded 12-gauge shotgun and a compound bow in his car has been arrested and charged. A 79-year-old man arrived at his Shepherds Hut Road home in Langwarrin South at around 10pm on 24 May. When he came home he saw a silver Nissan Maxima in his driveway with its doors and boot open. The man called police before confronting the man with a neighbour. Police arrived and arrested a 44-year-old man. They allege that in addition to the weapons and ammunition, that there was also stolen property inside the car. The man was charged with burglary, possess firearm, possess ammunition, and commit indictable offence whilst on bail. He was remanded to appear at Frankston Magistrates’ Court on 25 May. Police are attempting to reunite the allegedly stolen property with its proper owners. Anyone with information can contact Crime Stoppers on 1800 333 000

Tool thief wanted Classroom ransacked A MAN is wanted over the theft of two computers from a Langwarrin South school classroom. The man allegedly entered the art room at Bayside Christian College at around 8pm on 5 April. He gained entry through an unlocked window, and covered a sensor alarm. Two Apple computers and photography equipment were stolen from the classroom.

Police have released an image of a man (above) they wish to speak to about the incident. They describe him as “Caucasian, approximately mid/late 30s, medium build, light brown short hair with receding hairline, wearing a navy blue t-shirt which he removes, dark color pants. and riding a bike.” Anyone with information can contact Detective Senior Constable Brendan Fontana at Frankston CIU on 97845535 or Crime Stoppers on 1800 333 000.

A SPATE of tool thefts across Frankston South, Carrum Downs, and Langwarrin are being investigated by police. Police say that a man on a motor scooter has been stealing tools at night since at least 26 March. They say the scooter has a bag or carry system on the rear. “These tools are expensive, and their theft has left many tradies out-of-pocket and seriously affected their businesses,” a statement on the police eyewatch Facebook page read. Anyone with information or who has seen the man can contact First Constable Amy Smith at Frankston Criminal Investigation Unit on 9784 5572 or email VP42907@police.vic.gov.au