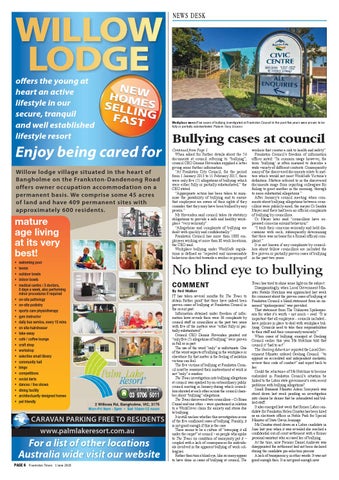 offers the young at heart an active lifestyle in our secure, tranquil and well established lifestyle resort

Enjoy being cared for Willow lodge village situated in the heart of Bangholme on the Frankston-Dandenong Road offers owner occupation accommodation on a permanent basis. We comprise some 45 acres of land and have 409 permanent sites with approximately 600 residents.

Workplace woes: Five cases of bullying investigated at Frankston Council in the past five years were proven to be fully or partially substantiated. Picture: Gary Sissons

Bullying cases at council Continued from Page 1 When asked for further details about the 54 documents at council referring to “bullying”, council CEO Dennis Hovenden supplied a letter giving some further information. “At Frankston City Council, for the period from 1 January 2013 to 11 February 2015, there were only five (5) allegations of bullying which were either fully or partially substantiated,” the CEO stated. “Appropriate action has been taken to minimise the possibility of bullying and to ensure that employees are aware of their rights if they consider that they may have been bullied by any person.” Mr Hovenden said council takes its statutory obligations to provide a safe and healthy workplace “very seriously”. “Allegations and complaints of bullying are dealt with quickly and confidentially.” Frankston Council has more than 1000 employees working at more than 30 work locations, the CEO said. Workplace bullying under WorkSafe regulations is defined as “repeated and unreasonable behaviour directed towards a worker or group of

workers that creates a risk to health and safety”. Frankston Council’s freedom of information officer noted: “In common usage however, the term ’bullying’ is often misused to describe a wide variety of different contexts. Consequently many of the discovered documents relate to matters which would not meet WorkSafe Victoria’s definition. Matters referred to in the discovered documents range from reporting colleagues for failing to greet another in the morning, through to more substantial allegations.” After January’s council meeting when comments about bullying allegations between councillors were publicly aired, the mayor Cr Sandra Mayer said there had been no official complaints of bullying by councillors. Cr Mayer later said “councillors have expressed concerns around behaviour”. “I took their concerns seriously and held discussions with each, subsequently determining that there was no basis for a formal official complaint.” It is not known if any complaints by councillors about fellow councillors are included the five proven or partially proven cases of bullying in the past two years.

By Neil Walker IT has taken several months for The Times to obtain further proof that there have indeed been proven cases of bullying at Frankston Council in the recent past. Information obtained under freedom of information laws reveals there were 36 complaints by council staff or councillors in the past two years with five of the matters were “either fully or partially substantiated”. Council CEO Dennis Hovenden pointed out “only five (5) allegations of bullying” were proven in full or in part. The use of the word “only” is unfortunate. One of the worst aspects of bullying in the workplace or elsewhere for that matter is the feeling of isolation victims can feel. The five victims of bullying at Frankston Council must be reassured their mistreatment at work is not “only” a number. The Times investigation into bullying allegations at council was sparked by an extraordinary public council meeting in January during which councillors shouted at each other across the council chamber about “bullying” allegations. The Times discovered two councillors – Cr Brian Cunial and one other – were questioned in relation to a WorkCover claim for anxiety and stress due to bullying. It is still unclear whether this investigation is one of the five confirmed cases of bullying. Frankly, it is not good enough if this is the case. There seems to be a culture of “sweeping it all under the carpet” at council – as people who spoke to The Times on condition of anonymity put it – coupled with a lack of consequences for individuals involved in the apparent bullying of work colleagues. Rather than turn a blind eye, like so many appear to have done in cases of bullying at council, The

Times has tried to shine some light on the subject. Disappointingly, when Local Government Minister Natalie Hutchins was approached last week for comment about the proven cases of bullying at Frankston Council a bland statement from an unnamed “spokesperson” was provided. That statement from The Unknown Spokesperson for what it’s worth – not much – read: “It is important that all employers - councils included have policies in place to deal with workplace bullying. Councils need to take their responsibilities to their staff and their community seriously.” When cases of bullying emerged at Geelong Council earlier this year Ms Hutchins told that council it “had to act”. The Geelong Advertiser reported the Local Government Minister ordered Geelong Council “to appoint an accredited and independent mediator, review their code of conduct” and report back to her. Could the reluctance of Ms Hutchins to become embroiled in Frankston Council’s situation be linked to the Labor state government’s own recent problems with bullying allegations? Small Business Minister Adem Somyurek was stood down last week pending an investigation into claims he denies that he intimidated and bullied staff. It also emerged last week that former Labor candidate for Frankston Helen Constas has been hired as an electorate officer in Noble Park for Special Minister of State Gavin Jennings. Ms Constas stood down as a Labor candidate in June last year when it was revealed she reached a confidential out-of-court settlement with a former personal assistant who accused her of bullying. At the time, now Premier Daniel Andrews was disappointed the settlement had not been declared during the candidate pre-selection process. A lack of transparency, in other words. It was not good enough then. It is not good enough now.