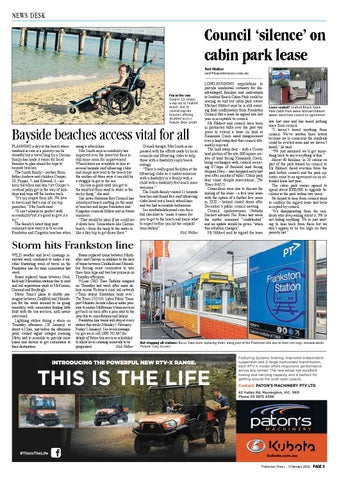 Fun in the sun: Cooper, 10, enjoys a day out at Seaford beach, one of several bayside beaches offering disabled access. Picture: Bron Smith

Bayside beaches access vital for all PLANNING a day at the beach when disabled access is a priority can be stressful but a travel blog by a Carrum family has made it easier for local families to plan ahead for trips to bayside beaches. The Smith family – mother Bron, father Andrew and children Cooper, 10, Pepper, 7, and Elwood, 3 – are keen travellers and don’t let Cooper’s cerebral palsy get in the way of holidays and trips off the beaten track. “It’s my respite from life. We love to travel and that’s one of our top priorities,” Mrs Smith said. “It can’t always be perfect with accessibility but it’s good to give it a try.” The family’s latest blog post examined how easy it is to access Frankston and Kingston beaches when

using a wheelchair. Mrs Smith says accessibility has improved over the years but there is still some room for improvement. Wheelchairs are available to hire at several bayside surf lifesaving clubs and ramps now lead to the beach but the mother-of-three says it can still be a struggle to get to the sea. “Access is good until you get to the sand but from sand to water is the tricky thing,” she said. She notes Hobsons Bay Council has introduced beach matting on the sand at beaches and hopes Frankston and Kingston councils follow suit in future summers. “That would be ideal if we could see it down here. Somewhere like Carrum beach – from the ramp to the water is like a day trip to get down there.”

Overall though, Mrs Smith is impressed with the efforts made by local councils and lifesaving clubs to help those with a disability enjoy beach outings. “There’s really good facilities at the lifesaving clubs so it makes someone with a disability or a family with a child with a disability feel much more welcome.” The Smith family visited 11 bayside beaches and found five surf lifesaving clubs hired out a beach wheelchair and ten had accessible bathrooms. See smithsholidayroad.com for a full checklist to “make it easier for you to get to the beach and know what to expect before you hit the carpark/ train station”. Neil Walker

LONG-RUNNING negotiations to provide residential certainty for disadvantaged families and individuals at Seaford Beach Cabin Park could be nearing an end but cabin park owner Michael Hibbert says he is still awaiting final confirmation from Frankston Council that a lease he signed late last year is acceptable to council. Mr Hibbert and council have been in protracted talks over the past two years to extend a lease on land at Kananook Creek amid disagreement over a land swap deal that council ultimately rejected. The land swap deal – with a Crown land portion of the site, 860 square metres of land facing Kananook Creek, being exchanged with council receiving 675sqm of freehold land facing Nepean Hwy – was dropped early last year after months of talks (‘Cabin park deal ‘close’ despite reservations’, The Times 6/4/15). Councillors were due to discuss the sealing of the lease – a five-year lease with the option of a further five years in 2020 – behind closed doors after December’s public council meeting. Council spokeswoman Natasha Duckett advised The Times last week the matter remained “confidential” and an update would be given “when this situation changes”. Mr Hibbert said he signed the lease

late last year and has heard nothing since from council. “I haven’t heard anything from council. We’ve written three letters because we’re conscious the residents could be evicted soon and we haven’t heard,” he said. “We just assumed we’d get something back to say everything is fine.” About 40 families, in 20 cabins on part of the park leased by council to Mr Hibbert, faced eviction from the park before council and the park operator came to an agreement on an extended lease last year. The cabin park owner agreed to spend about $300,000 to upgrade facilities at the park within two years. He hoped to hear from council soon to confirm the signed lease had been accepted by council. “It’s disappointing from the residents who keep asking about it. We’re not hiding anything. We’re just waiting to hear back from them but we don’t appear to be too high on their priority list.”

Storm hits Frankston line WILD weather and level crossings removals work combined to make it another frustrating week of travel on the Frankston line for train commuters last week. Buses replaced trains between Caulfield and Moorabbin stations due to road and rail separations work at McKinnon, Ormond and Bentleigh. Metro Train’s plans to shuttle passengers between Caulfield and Moorabbin for the week seemed to be going smoothly, with commuters finding little fault with the bus services, until nature intervened. Lightning strikes during a storm on Thursday afternoon (28 January) at about 4.15pm, just before the afternoon peak, caused signal outages meaning Metro had to scramble to provide more buses and drivers to get commuters to their destination.

Buses replaced trains between Mordialloc and Carrum in addition to the lack of trains between Caulfield and Moorabbin forcing some commuters to take three train trips and two bus journeys on Thursday afternoon. V/Line CEO Theo Taifalos resigned on Thursday last week after mass delays across Victoria’s rural rail network (‘Train delays frustration boils over’, The Times 25/1/16). Labor Public Transport Minister Jacinta Allan is under pressure to ensure Melbourne’s train services get back on track after a poor start to the year due to cancellations and delays. Frankston line trains will stop at every station this week (Monday 1 FebruaryFriday 5 January). See levelcrossings. vic.gov.au or call 1800 762 667 for details of future bus services scheduled to allow level crossing removals to be progressed. Neil Walker

Not stopping all stations: Buses have been replacing trains along part of the Frankston line due to level crossings removal works. Picture: Gary Sissons

THIS IS THE LIFE

Featuring dynamic braking, improved independent suspension and 2-range hydrostatic transmission, each RTV-X model oﬀers responsive performance across any terrain. The new range has excellent towing and carrying capacity and is perfect for getting around the wide open spaces.