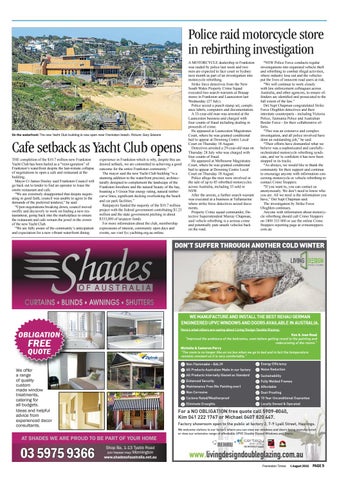 Cafe setback as Yacht Club opens THE completion of the $10.7 million new Frankston Yacht Club has been hailed as a “reinvigoration” of Frankston’s waterfront despite the last-minute collapse of negotiations to open a cafe and restaurant at the building. Mayor Cr James Dooley said Frankston Council will go back out to tender to find an operator to lease the onsite restaurant and cafe. “We are extremely disappointed that despite negotiating in good faith, council was unable to agree to the demands of the preferred tenderer,” he said. “Upon negotiations breaking down, council moved swiftly and decisively to work on finding a new restauranteur, going back into the marketplace to ensure the restaurant and cafe remain the jewel in the crown of the new Yacht Club. “We are fully aware of the community’s anticipation and expectation for a new vibrant waterfront dining

experience in Frankston which is why, despite this undesired setback, we are committed to achieving a good outcome for the entire Frankston community.” The mayor said the new Yacht Club building “is a stunning addition to the waterfront precinct, architecturally designed to complement the landscape of the Frankston foreshore and the natural beauty of the bay, boasting a 5 Green Star energy rating, natural timber curve lines, significant decking overlooking the beach and car park facilities.” Ratepayers funded the majority of the $10.7 million project with the federal government contributing $1.25 million and the state government pitching in about $333,000 of taxpayer funds. For more information about the club, membership expressions of interest, community open days and events, see visit fyc.yachting.org.au online.

“NSW Police Force conducts regular investigations into organised vehicle theft and rebirthing to combat illegal activities, where industry lose out and the vehicles put the lives of innocent road users at risk. “We will continue to work closely with law enforcement colleagues across Australia, and other agencies, to ensure offenders are identified and prosecuted to the full extent of the law.” Det Supt Chapman congratulated Strike Force Ologhlen detectives and their interstate counterparts - including Victoria Police, Tasmania Police and Australian Border Force - for their collaborative efforts. “This was an extensive and complex investigation, and all police involved have done an outstanding job,” he said. “Their efforts have dismantled what we believe was a sophisticated and carefullyorchestrated motorcycle rebirthing syndicate, and we’re confident it has now been stopped in its tracks. “As always, we would like to thank the community for their support and continue to encourage anyone with information concerning motorcycle or vehicle rebirthing to contact Crime Stoppers. “If you want to, you can contact us anonymously. We don’t need to know who you are. All we need is the information you have,” Det Supt Chapman said. The investigation by Strike Force Ologhlen continues. Anyone with information about motorcycle rebirthing should call Crime Stoppers on 1800 333 000 or use the online Crime Stoppers reporting page at crimestoppers. com.au

WE MANUFACTURE AND INSTALL THE BEST REHAU GERMAN ENGINEERED UPVC WINDOWS AND DOORS AVAILABLE IN AUSTRALIA. Here’s what others are saying about Living Design Double Glazing:

Ken &amp; Joan Read “Improved the ambience of the bedrooms, even before getting round to the painting and redecorating of the rooms.”

Michelle &amp; Cameron Parry “The room is no longer like an ice box when we go to bed and in fact the temperature remains constant so it is very comfortable.”

We welcome visitors to our factory where you can view our windows and doors being manufactured or view our extensive range of affordable UPVC Double Glazed Windows and Doors.