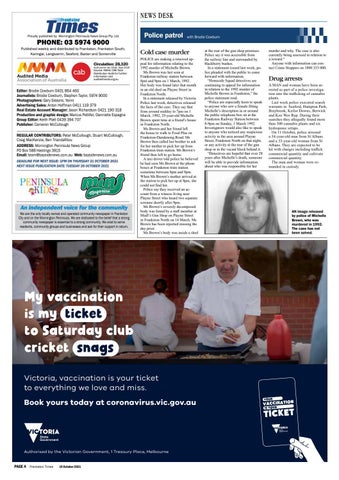 Cold case murder POLICE are making a renewed appeal for information relating to the 1992 murder of Michelle Brown. Ms Brown was last seen at Frankston railway station between 8pm and 9pm on 1 March, 1992. Her body was found later that month in an old shed on Playne Street in Frankston North. In a statement released by Victoria Police last week, detectives released the facts of the case. They say that from around midday to 7pm on 1 March, 1992, 25-year-old Michelle Brown spent time at a friend’s house in Frankston North. Ms Brown and her friend left the house to walk to Food Plus on Frankston-Dandenong Road. Ms Brown then called her brother to ask for her mother to pick her up from Frankston train station. Ms Brown’s friend then left to go home. A taxi driver told police he believed he had seen Ms Brown at the phone boxes at Frankston train station sometime between 8pm and 9pm. When Ms Brown’s mother arrived at the station to pick her up at 8pm, she could not find her. Police say they received an account from a witness living near Playne Street who heard two separate screams shortly after 9pm. Ms Brown’s severely decomposed body was found by a staff member at Miall’s Gun Shop on Playne Street in Frankston North on 14 March. Ms Brown has been reported missing the day prior. Ms Brown’s body was inside a shed

at the rear of the gun shop premises. Police say it was accessible from the railway line and surrounded by blackberry bushes. In a statement issued last week, police pleaded with the public to come forward with information. “Homicide Squad detectives are continuing to appeal for information in relation to the 1992 murder of Michelle Brown in Frankston,” the police statement read. “Police are especially keen to speak to anyone who saw a female fitting Michelle’s description in or around the public telephone box on at the Frankston Railway Station between 8-9pm on Sunday, 1 March 1992. Investigators would also like to speak to anyone who noticed any suspicious activity in the area around Playne Street, Frankston North on that night, or any activity at the rear of the gun shop or in the vacant block behind it. “Detectives are hopeful that over 28 years after Michelle’s death, someone will be able to provide information about who was responsible for her

murder and why. The case is also currently being assessed in relation to a reward.” Anyone with information can contact Crime Stoppers on 1800 333 000.

Drug arrests A MAN and woman have been arrested as part of a police investigation into the trafficking of cannabis plants. Last week police executed search warrants in Seaford, Hampton Park, Braybrook, Keilor Downs, Berwick and Koo Wee Rup. During their searches they allegedly found more than 300 cannabis plants and six hydroponic setups. On 11 October, police arrested a 34-year-old man from St Albans and a 33-year-old woman from St Albans. They are expected to be hit with charges including traffick commercial quantity and cultivate commercial quantity. The man and woman were remanded in custody.

AN image released by police of Michelle Brown, who was murdered in 1992. The case has not been solved.