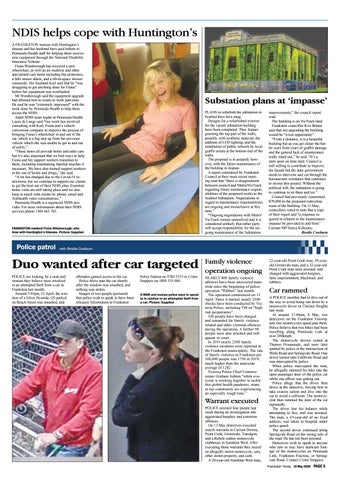 NDIS helps cope with Huntington’s A FRANKSTON woman with Huntington’s disease and her husband have paid tribute to Peninsula Health staff for helping them receive new equipment through the National Disability Insurance Scheme. Fiona Winsborough has received a new wheelchair, as well an air mattress and other specialised care items including hip protectors, a falls sensor alarm, and a tilt-in-space shower commode. Her husband Karl said that he “was struggling to get anything done for Fiona” before her equipment was overhauled. Mr Winsborough said the equipment upgrade had allowed him to return to work part-time. He said he was “extremely impressed” with the work done by Peninsula Health to help them access the NDIS. Adult NDIS team leader at Peninsula Health Laura de Lange said “our work has involved consulting with Karl, Fiona and a vehicle conversion company to improve the process of bringing Fiona’s wheelchair in and out of the car, which is a big step up from her previous vehicle which she was unable to get in and out of safely.” “These items all provide better and safer care but it’s also important that we find ways to help Fiona and her support workers transition to them, including maintaining familiar touches if necessary. We have also trained support workers in the use of hoists and slings,” she said. “A lot has changed due to the Covid-19 restrictions, but we continue to support our clients to get the best out of their NDIS plan. Essential home visits are still taking place and we also keep in touch with clients by phone, email and Telehealth video consultations.” Peninsula Health is a registered NDIS provider. For more information about their NDIS services phone 1300 665 781.

PLANS to refurbish the substation in Seaford have hit a snag. Designs for a refurbished exterior for the vacant substation building have been completed. They feature greening the top part of the walls, possibly with synthetic material, the addition of LED lighting, and the installation of public artwork by local graffiti artists at the bottom end of the walls. The proposal is in jeopardy however, with the future maintenance of the building in dispute. A report considered by Frankston Council at their most recent meeting read that “there is disagreement between council and Metro/VicTrack regarding future maintenance responsibilities of the proposed works to the Seaford Substation. Negotiations in regard to maintenance responsibilities are ongoing and inconclusive at this time.” “Ongoing negotiations with Metro/ VicTrack remain unresolved and it is considered unlikely that either party will accept responsibility for the ongoing maintenance of the Substation

improvements,” the council report read. The building is on VicTrack land. Frankston councillor Kris Bolam said that not upgrading the building would be “a lost opportunity”. “From a distance, it is a beautiful building but as you get closer the battle scars from years of graffiti damage and the general lack of maintenance really stand out,” he said. “It’s a state asset on state land. Council is still willing to contribute to improve the facade but the state government needs to intervene and cut through the bureaucratic resistance that continues to stymie this project. Without the political will, the substation is going to continue to sit there and rot.” Council had previously committed $70,000 to the proposed redevelopment of the building. On 11 May, councillors voted to note that a copy of their report and “a response required in relation to the maintenance impasse be provided to and from” Carrum MP Sonya Kilkenny. Brodie Cowburn

Duo wanted after car targeted POLICE are looking for a man and woman they believe were involved in an attempted theft from a car in Frankston last month. Around 7.45pm, 21 April, the window of a Silver Hyundai i20 parked on Beach Street was smashed, and

offenders gained access to the car. Police drove past the car shortly after the window was smashed, and nothing was stolen. Images of two people (pictured) that police wish to speak to have been released. Information to Frankston

NEARLY 800 family violence offences have been uncovered statewide since the beginning of police operation “Ribbon” last month. The operation commenced on 13 April. Since it started, nearly 2500 checks have been conducted by Victoria Police, including 748 on “high risk perpetrators”. 100 people have been charged and remanded for family violence related and other criminal offences during the operation. A further 98 people were also arrested and will appear in court. In 2019 nearly 2500 family violence incidents were reported in the Frankston municipality. The rate of family violence in Frankston per 100,000 people was 1730 in 2019, much higher than the statewide average of 1282. Victoria Police Chief Commissioner Graham Ashton “while everyone is working together to tackle this global health pandemic, many in our community are experiencing an especially tough time.”

Car rammed A POLICE member had to dive out of the way to avoid being run down by a motorcycle driver in Chelsea Heights last week. At around 11.40pm, 8 May, two detectives on the Frankston Freeway saw two motorcycles speed past them. Police believe that two bikes had been travelling along Peninsula Link at over 200kmph. The motorcycle drivers exited at Thames Promenade, and were later spotted by police at the intersection of Wells Road and Springvale Road. One driver turned onto Edithvale Road and was intercepted by police. When police intercepted the man, he allegedly rammed his bike into the open passenger door of the police car while one officer was getting out. Police allege that the driver then drove at the detective, forcing him to take evasive action and dive into the car to avoid a collision. The motorcyclist then rammed the door of the car repeatedly. The driver lost his balance while attempting to flee, and was arrested. The man, a 43-year-old of no fixed address, was taken to hospital under police guard. The second driver continued along Springvale Road on the wrong side of the road. He has not been arrested. Detectives wish to speak to anyone who saw or may have dashcam footage of the motorcycles on Peninsula Link, Frankston Freeway, or Springvale Road. Contact Crime Stoppers. Frankston Times 19 May 2020