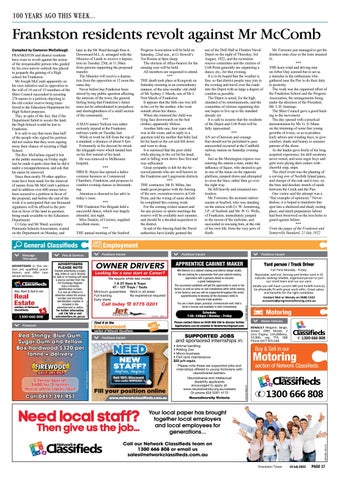 Frankston residents revolt against Mr McComb later in the Mr Ward through Hon A. Downward M.L.A. arranged with the Minister of Lands to receive a deputation on Tuesday 25th, at 11.30am from persons supporting the proposed transfer. The Minister will receive a deputation from the opposition at 12 noon the same day. Never before has Frankston been stirred by any public question affecting the interests of the town, the general feeling being that Frankston’s future must not be subordinated to prejudices and shortsightedness of a small section of the community. *** A MAN names Neilson was rather seriously injured at the Frankston railways yards on Tuesday last. While at work he fell from the top of a standard, a distance of about 8 feet. Fortunately in his descent he struck the telegraph wires which landed him on his feet instead of his head. He was removed to Melbourne hospital. *** MRS R. Hayes has opened a ladies costume business as Commercial Chambers, Frankston, and proposes to conduct evening classes in dressmaking. Attention is directed to her advt in today’s issue. *** THE Frankston Fire Brigade held a successful dance, which was largely attended, last night. Miss Deakin, of Carrum, supplied excellent music. *** THE annual meeting of the Seaford

Buy, Rent &amp; Sell in our

9M Interiors is a cabinet making and interior design studio. We are looking for a passionate ﬁrst-year cabinet making apprentice with a genuine desire to become a great tradesperson. The successful candidate will get the opportunity to work in the factory as well as some on-site installations (after initial training in the factory), and you will be supported throughout the entire apprenticeship to develop all the necessary skills to become trade qualiﬁed. You are a team player, punctual, communicate well, hold a driver’s license and available to start immediately.

SUPPORTED JOBS and sponsored internships in:

Please contact Steve on 0439 866 556 to discuss further. Applications can be emailed to 9minteriors@gmail.com

Buy &amp; Sell in our

Your local paper has brought together local employers and local employees for generations... Call our Network Classiﬁeds team on 1300 666 808 or email us sales@networkclassiﬁeds.com.au

Mr. Forrester just managed to get the drunken man clear as the train steamed in. *** THE keen wind and driving rain on Arbor Day seemed but to act as a stimulus to the enthusiasts who gathered near the Pier to do their duty to posterity. The work was the organised effort of the Frankston School and the Progress Association, the arrangements being under the direction of the President, Mr. J. D. Jennings. The Shire Council gave a good backing to the movement. The day opened with a practical demonstration by Mr. G. S. Mann on the trimming of some fine young growths of ti-tree, so as to produce leafy arbors and winding bays, to give comfort, shade and beauty to summer patrons of the shore. As the leader gave freely of his long acquired experience, his deft secateurs never rested, and soon eager boys and girls were plying their cutters with cheerful snip, snips. The chief event was the planting of a curving row of Norfolk Island pines, and clumps of she-oak and ti-tree, on the bare and desolate stretch of sands between the Creek and the Pier. One visitor said the attempt was a “fine example of optimism.” Nevertheless, it is hoped to transform this spot into a sheltered and shady resting place, and much preparatory labour had been bestowed on the tree-holes to guard against failure. *** From the pages of the Frankston and Somerville Standard, 21 July 1922

use of the Drill Hall at Flinders Naval Depot on the night of Thursday, 3rd August, 1922, and the recreation reserve committee and the citizens of Crib Point generally are organising a dance, etc., for that evening. It is to be hoped that the weather is fine, so that district people may join in the evening and travel over the roads into the Depot with as large a degree of comfort as possible. The Depot is noted, for the high standard of its entertainments, and the committee of citizens organising this one hopes to live up to the standard already set. It is safe to assume that the residents of the Depot and Crib Point will be fully represented. *** AN act of heroism and courage that should not be permitted to pass unrecorded occurred at the Caulfield railway station on Saturday evening last. Just as the Mornington express was entering the station a man, under the influence of liquor, who desired to get in one of the trains on the opposite platform, jumped down and attempted to cross the lines, rather than go over the right way. He fell heavily and remained motionless. Mr. Forrester, the assistant station– master at Seaford, who was standing on the station with Cr. W. Armstrong, J.P., of Seaford, and Mr. W. G. Wells, of Frankston, immediately jumped to the rescue of the inebriate, and succeeded in rescuing him, at the risk of his own life, from the very jaws of death.

Progress Association will be held on Saturday, 22nd inst., at Cr Howell’s Tea Rooms at 8pm sharp. The election of office-bearers for the ensuing year will be held. All members are requested to attend. *** THE death took place at Kongwak on Saturday morning in an extraordinary manner, of the nine months’ old child of Mr Sydney J. Marsh, son of Mr J. Nott Marsh of Frankston. It appears that the little one was left in his cot by the mother, who went outside about her duties. When she returned the child was lying face downwards on the bed clothes, apparently lifeless. Another little one, four years old, was in the room, and in reply to a question told his mother that baby had hit his head on the cot and fell down and went to sleep. It is surmised that the poor child while playing in the cot hit his head, and in falling went down face first and was suffocated. Great sympathy is felt for the bereaved parents who are well known in the Frankston and Langwarrin districts. *** THE contractor, Mr D. Milne, has made good progress with the fencing of the new, recreation reserve at Crib Point, and the wiring of same should he completed this coming week. For the coming cricket season and for any picnics or sports meetings the reserve will be available next summer, and should be a decided acquisition to the district. In aid of the fencing fund the Naval authorities have kindly granted the

Compiled by Cameron McCullough FRANKSTON and district residents have risen in revolt against the action of the irresponsible person who guided by his own narrow outlook has placed in jeopardy the gaining of a High school for Frankston. Mr Joseph McComb apparently on his own initiative and in opposition to the will of 14 out of 15 members of the Shire Council succeeded in securing 276 names to a petition objecting to the old cricket reserve being transferred to the Education Department for High School purposes. This, in spite of the fact, that if the Department failed to secure the land, the High School would be lost to Frankston. It is safe to say that more than half of the people who signed his petition did not realise that they were signing away their chance of securing a High School. The Rev McFarlane signed it but at the public meeting on Friday night last he made it quite clear that he did it under a misapprehension, and ask that his name be removed. Since then nearly 50 other applications have been made for the removal of names from Mr McComb’s petition and in addition over 600 names have been secured to a petition in favor of the proposal, and before the end of the week it is anticipated that one thousand signatures will be affixed to the petition in favor of the land in question being made available to the Education Department. Cr Gray and Mr Ward, secretary Peninsula Schools Association, waited on the Department on Monday, and