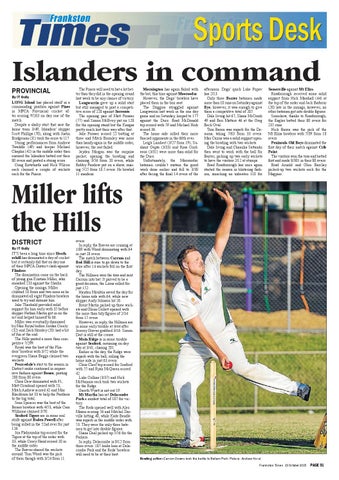 By IT Gully LONG Island has placed itself in a commanding position against Pines in MPCA Provincial cricket after scoring 9/263 on day one of the match. Despite a shaky start that saw the home team 3/49, Islanders’ skipper Scott Phillips (70), along with Justin Bridgeman (31) took the score to 117. Strong performances from Andrew Tweddle (49) and keeper Michael Chaplin (42) in the middle order then ensured the Islanders batted out their 80 overs and posted a strong score. Craig Entwhistle and Nick Wilcox each claimed a couple of wickets each for the Piners.

The Piners will need to bat a lot better than they did in the opening round last week to be any chance of victory. Langwarrin gave up a solid start but still managed to post a competitive score of 228 against Sorrento. The opening pair of Matt Prosser (77) and Simon McEvoy put on 128 for the opening stand but the Kangas pretty much lost their way after that. Jake Prosser scored 22 batting at three and Mitch Bromley was more than handy again in the middle order, however, the rest failed. Jayden Morgan was the surprise packet, opening the bowling and claiming 3/56 from 20 overs, while Bobby Parslow put on a show, snaring 5/25 from 18.5 overs. He bowled 11 maidens.

Mornington has again failed with the bat, this time against Moorooduc. However, the Dogs’ bowlers have placed them in the box seat. The Doggies struggled against Langwarrin last week in the one day game and on Saturday, limped to 177 against the Ducs. Brad McDonald top scored with 59 and Michael Heib scored 36. The home side rolled their more fancied opponents in the 66th over. Leigh Lambert (3/27 from 19), Sushant Gupta (3/33) and Ross Cordeaux (3/31) were more than solid for the Ducs. Unfortunately, the Moorooduc batsmen couldn’t sustain the good work done earlier and fell to 3/30 after facing the final 14 overs of the

afternoon. Dogs’ quick Luke Popov has 2/13 Only three Baxter batsmen made more than 10 runs on Saturday against Rye, however, it was enough to give them a competitive total of 205. Dale Irving hit 67, Shane McComb 49 and Ben Matters 46 at the Greg Beck Oval. Tom Baron was superb for the Demons, taking 7/63 from 33 overs. Max Cairns was a solid support opening the bowling with two wickets. Dale Irving and Chamika Sattambi then went to work with the ball for Baxter, picking up two early wickets to have the visitors 2/12 at stumps. Brad Rossborough has once again started the season in blistering fashion, smacking an unbeaten 110 for

Somerville against Mt Eliza. Rossborough received some solid support from Nick Marshall (44) at the top of the order and Jack Barbour (20) late in the innings, however, no other batsman got into double figures. Somehow, thanks to Rossborough, the Eagles batted their 80 overs for 235 runs. Nick Baron was the pick of the Mt Eliza bowlers with 5/39 from 18 overs. Peninsula Old Boys dominated the first day of their match against Crib Point. The visitors won the toss and batted first and made 8/301 in their 80 overs. Brad Arnold and Glen Barclay picked-up two wickets each for the Magpies.

By IT Gully IT’S been a long time since Heatherhill has dominated a day of cricket but it certainly did that on day one of their MPCA District clash against Flinders. The domination came on the back of young gun Kristian Miller, who smashed 133 against the Sharks. Opening the innings, Miller clubbed 18 fours and two sixes as he dominated all eight Flinders bowlers used to try and dismiss him. Jake Theobald provided solid support for him early with 35 before skipper Nathan Martin got in on the act and helped himself to 66. Miller was eventually dismissed by Max Royal before Jordan Creely (32) and Zach Horsley (20) had a bit of fun at the end. The Hills posted a more than competitive 7/299. Royal was the best of the Flinders’ bowlers with 3/72 while the evergreen Shane Beggs claimed two wickets. Pearcedale’s start to the season in District ranks continued in impressive fashion against Boneo, posting 288 from 80 overs. Chris Dew dominated with 91, Matt Cousland opened with 53, Mitch Andrew scored 42 and Max Blackburn hit 33 to help the Panthers to the big total. Sean Spencer was the best of the Boneo bowlers with 4/53, while Cam Williams claimed 3/70. Seaford Tigers are in some real strife against Baden Powell after being rolled in the 52nd over for just 126. Jon Plakourakis top scored for the Tigers at the top of the order with 33, while Corey Hand scored 20 in the middle order. The Braves shared the wickets around. Tom Wood was the pick of them though with 3/24 from 11

overs. In reply, the Braves are cruising at 1/89 with Wood dominating with 64 in just 28 overs. The match between Carrum and Red Hill is sure to go down to the wire after 14 wickets fell on the first day. The Hillmen won the toss and sent Carrum into bat. It proved to be a good decision, the Lions rolled for just 152. Hayden Moulton saved the day for the home side with 64, while new skipper Andy Johnson hit 26. Brent Martin picked up three wickets and Glenn Collett opened with the more than tidy figures of 2/34 from 15 overs. However, in reply, the Hillmen are in some early trouble at 4/44 after Jeremy Graves grabbed 3/16. Simon Dart is still at the crease. Main Ridge is in some trouble against Seaford, resuming on day two at 3/41, chasing 201. Earlier in the day, the Ridge were superb with the ball, rolling the home side in just 63 overs. Chris Cleef top scored for Seaford with 55 and Ryan McQueen scored 42. Luke Collins (3/37) and Nick McNamara each took two wickets for the Ridge. Gareth Wyatt is not out 19. Mt Martha has set Delacombe Park a modest total of 187 for victory. The Reds opened well with Alex Mason scoring 56 and Mitchel Darville hitting 40, while Kade Bendle was superb in the middle order with 53. They were the only three batsmen to get into double figures. Shane Deal picked up 5/56 for the Parkers. In reply, Delacombe is 0/12 from three overs. 187 looks lean at Delacombe Park and the Reds’ bowlers will need to be at their best. Bowling action: Carrum Downs took the battle to Ballam Park. Picture: Andrew Hurst Frankston Times 19 October 2015