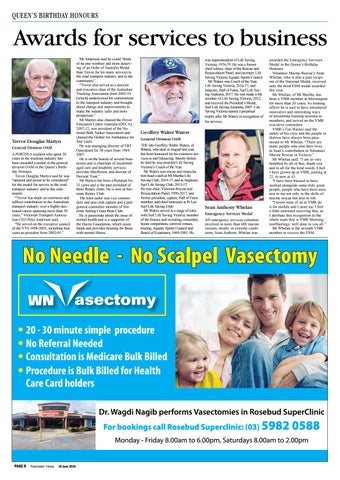 Awards for services to business

Trevor Douglas Martyn General Division OAM A PORTSEA resident who spent 50 years in the trucking industry has been awarded a medal in the general division OAM in the Queen’s Birthday Honours. Trevor Douglas Martyn said he was “amazed and proud to be considered” for the award for service to the road transport industry and to the community. “Trevor has made an enormous and selfless contribution to the Australian transport industry over a highly-decorated career spanning more than 50 years,” Victorian Transport Association CEO Peter Anderson said. “He served on the executive council of the VTA 1998-2005, including four years as president from 2002-05.”

Mr Anderson said he could “think of no one worthier and more deserving of an Order of Australia Medal than Trevor for his many services to the road transport industry and to the community”. “Trevor also served as a director and executive chair of the Australian Trucking Association from 2002-10 [which] underscored his commitment to the transport industry and brought about change and improvements to make the industry safer and more prosperous.” Mr Martyn also chaired the Driver Education Centre Australia (DECA), 2007-12, was president of the National Bulk Tanker Association and chaired the Global Air Ambulance for four years. He was managing director of FBT Operations for 38 years from 19692007. He is on the boards of several businesses and is chairman of residential aged care and disability services provider Mayflower, and director of Decoral Trust.” Mr Martyn has been a Rotarian for 35 years and is the past president of three Rotary clubs. He is now at Sorrento Rotary Club. The keen sailor was vice commodore and also club captain and a past general committee member of Sorrento Sailing Couta Boat Club. He is passionate about the issue of mental health and is a supporter of the Haven Foundation, which raises funds and provides housing for those with mental illness.

Geoffrey Walter Waters General Division OAM THE late Geoffrey Walter Waters, of Bittern, who died in August last year, has been honoured for his extensive services to surf lifesaving. Shortly before he died he was awarded Life Saving Victoria’s Coach of the Year. Mr Waters was rescue and resuscitation head coach at Mt Martha Life Saving Club, 2014-17, and at Anglesea Surf Life Saving Club, 2013-17. He was chair, Victorian Rescue and Resuscitation Panel, 1990-2017, and former president, captain, Hall of Fame member, and chief instructor at Pt Leo Surf Life Saving Club. Mr Waters served in a range of roles with Surf Life Saving Victoria: member of the finance and recruiting committee, house competition, carnival venues, touring, Aquatic Sports Council and Board of Examiners, 1969-2001. He

awarded the Emergency Services Medal in the Queen’s Birthday Honours. Volunteer Marine Rescue’s Sean Whelan, who is also a past recipient of the National Medal, received only the third ESM medal awarded this year. Mr Whelan, of Mt Martha, has been a VMR member at Mornington for more than 20 years. As training officer he is said to have introduced innovative and interesting ways of presenting training sessions to members, and served on the VMR executive committee. VMR’s Tim Warner said the safety of his crew and the people in distress have always been paramount to Mr Whelan. “There are many people who owe their lives to Sean’s contribution to Volunteer Marine Rescue in Victoria.” Mr Whelan said: “I am so very humbled by all of this, thank you and to all for the kind words. I feel I have grown up at VMR, joining at 22, to now at 43. “I have been blessed to have worked alongside some truly great people, people who have been mentors to me not only in the skills of marine rescue but also in life. “I know none of us at VMR do it for medals and I must say I feel a little awkward receiving this, so I attribute this recognition to the whole team that is VMR Mornington/Hastings: well done to you all.” Mr Whelan is the seventh VMR member to receive the ESM.