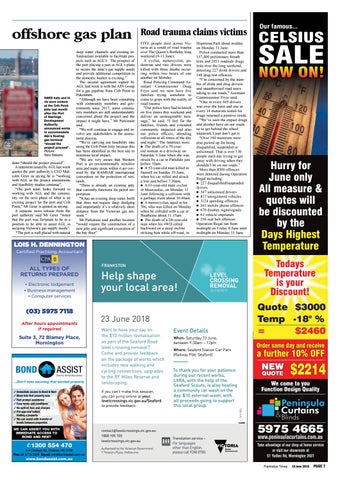 done “should the project proceed”. A statement issued by AGL last week quotes the port authority’s CEO Malcolm Geier as saying he is “working with AGL as the project assessments and feasibility studies continue”. “The port team looks forward to working with AGL and the community on the next phase of what is an exciting project for the port and Crib Point,” Mr Geier is quoted as saying. A separate news release from the port authority said Mr Geier “noted that the port was fortunate to be in a position to be able to assist AGL in securing Victoria’s gas supply needs”. “The port is well placed with natural

deep water channels and existing infrastructure available to facilitate projects such as AGL’s. The prospect of the port playing a part in AGL’s plans to secure the state’s gas supply needs and provide additional competition in the domestic market is exciting.” The second agreement signed by AGL last week is with the APA Group for a gas pipeline from Crib Point to Pakenham. “Although we have been consulting with community members and governments since 2017, some community members are still understandably concerned about the project and the impact it might have,” Mr Parkinson said. “We will continue to engage and involve any stakeholders in the assessment process. “We’re carrying out feasibility into using the Crib Point Jetty because this has been identified as the best site to minimise local impact. “We are very aware that Western Port is an environmentally sensitive area and many areas within it are covered by the RAMSAR international convention on the protection of wetlands. “There is already an existing jetty that currently functions for petrol importation. “It has an existing deep water berth that does not require deep dredging and importantly it’s a relatively short distance from the Victorian gas network.” Mr Parkinson said another location “would require the construction of a new jetty and significant excavation of the bay floor”.

Road trauma claims victims FIVE people died across Victoria as a result of road trauma over The Queen’s Birthday long weekend (9-11 June). A cyclist, motorcyclist, pedestrian and two drivers were killed with three deaths occurring within two hours of one another on Monday. Road Policing Command Assistant Commissioner Doug Fryer said we now have five families trying somehow to come to grips with the reality of road trauma. “Our police have had to knock on five doors this weekend and deliver an unimaginable message,” he said. “I feel for the families, friends and extended community impacted and also our police officers; attending collisions at all times of the day and night.” The fatalities were: n The death of a 70-yearold woman in a driveway on Saturday 9 June when she was struck by a car in Parkdale just before 10am. n A 52-year-old man killed in Stawell on Sunday 10 June, when his car rolled and struck a tree just before 7.30pm. n A 61-year-old male cyclist in Moorooduc, on Monday 11 June following a collision with a garbage truck about 10.40am. n A motorcyclist, aged in his 50s, who was killed on Monday when he collided with a car at Heathcote about 11.15am. n The death of a 28-year-old man when his 4WD rolled backward on a steep incline striking him while off-road, in

Hopetoun Park about midday on Monday 11 June. Police conducted more than 137,400 preliminary breath tests and 2051 roadside drugs tests over the long weekend; detecting 227 drink drivers and 148 drug test offences. “I’m concerned by the number of drink and drug drivers and unauthorised road users taking to our roads,” Assistant Commissioner Fryer said. “One in every 605 drivers was over the limit and one in every 14 motorists tested for drugs returned a positive result. “We’ve seen the impact drugs and alcohol have on our roads so to get behind the wheel impaired, I just don’t get it. “Over 540 motorists were also picked up for being disqualified, suspended or unlicensed. That is over 130 people each day trying to get away with driving when they shouldn’t be on our roads.” More than 8500 offences were detected during Operation Regal including: n 227 disqualified/suspended drivers n 347 unlicensed drivers n 817 unregistered vehicles n 3124 speeding offences n 341 mobile phone offences n 670 disobey signs/signals n 63 vehicle impounds n 256 seat belt offences Operation Regal ran from midnight on Friday 8 June until midnight on Monday 11 June.

If you can&#39;t make this session, you can jump online at your. levelcrossings.vic.gov.au/Seaford to provide feedback.

Hurry for June only All measure &amp; quotes will be discounted by the Days Highest Temperature

To thank you for your patience during our recent works, LXRA, with the help of the Seaford Scouts, is also hosting a community car wash on the day. $10 external wash, with all proceeds going to support this local group.

23 June 2018 Want to have your say on the $10 million revitalisation as part of the Seaford Road level crossing removal? Come and provide feedback on the package of works which includes new walking and cycling connections, upgrades to the RF Miles Reserve and landscaping.

Todays Temperature is your Discount!

a further 10% OFF NEW QUOTE

ALL TYPES OF RETURNS PREPARED

Take advantage of our shop at home service or visit our showroom at 51 Yuilles Rd, Mornington 3931 Frankston Times