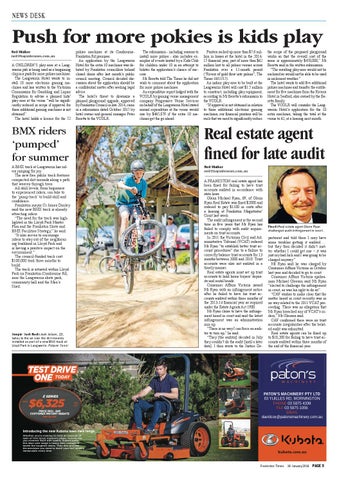 Push for more pokies is kids play Neil Walker neil@baysidenews.com.au A CHILDREN’S play area at a Langwarrin pub is being used as a bargaining chip in a push for more pokies machines. The Langwarrin Hotel wants to install 10 more electronic gaming machines and has written to the Victorian Commission for Gambling and Liquor Regulation to advise a planned kids’ play area at the venue “will be significantly reduced in scope if approval for these additional gaming machines is not obtained”. The hotel holds a licence for the 52

pokies machines at its CranbourneFrankston Rd premises. An application by the Langwarrin Hotel for the extra 10 machines was debated by Frankston councillors behind closed doors after last month’s public council meeting. Council decided discussion about the application should be a confidential matter after seeking legal advice. The hotel’s threat to downsize a planned playground upgrade, approved by Frankston Council in late 2014, came in a submission dated October 2015 by hotel owner and general manager Peter Beretta to the VCGLR.

The submission - including reasons to install more pokies - also includes examples of events hosted by a Kids Club for children under 10 in an attempt to bolster the application’s chance of success. Mr Beretta told The Times he did not wish to comment about the application for more pokies machines. An expenditure report lodged with the VCGLR by gaming venue management company Progressive Venue Services on behalf of the Langwarrin Hotel stated annual expenditure at the venue would rise by $465,879 if the extra 10 machines get the go ahead.

Punters racked up more than $7.6 million in losses at the hotel in the 201415 financial year, part of more than $62 million lost to all pokies venues across Frankston over a 12-month period (“Rivers of gold flow into pokies”, The Times 16/11/15). An indoor play area to be built at the Langwarrin Hotel will cost $1.5 million to construct, including play equipment, according to Mr Beretta’s submission to the VCGLR. “If approval is not obtained in relation to these additional electronic gaming machines, our financial position will be such that we need to significantly reduce

the scope of the proposed playground works so that the overall cost of the same is approximately $450,000,” Mr Beretta said in the written submission. “The resulting play area would not be enclosed so would not be able to be used in inclement weather.” The hotel wants to add five additional pokies machines and transfer the entitlement for five machines from the Riviera Hotel in Seaford, also owned by the Beretta family. The VCGLR will consider the Langwarrin Hotel’s application for the 10 extra machines, taking the total at the venue to 62, at a hearing next month.

A BMX track at Langwarrin has riders jumping for joy. The new free public track features compacted dirt mounds along a path that weaves through trees. All skill levels, from beginners to experienced riders, can take to the ‘pump track’ to build skill and confidence. Frankston mayor Cr James Dooley said the new BMX track is already attracting riders. “The need for the track was highlighted in the Lloyd Park Master Plan and the Frankston Skate and BMX Facilities Strategy,” he said. “It also serves to encourage riders to stay out of the neighbouring bushland in Lloyd Park and is having a positive impact on the environment.” The council-funded track cost $100,000 took three months to build. The track is situated within Lloyd Park on Frankston-Cranbourne Rd, near the Langwarrin skate park, community hall and the Men’s Shed.

Neil Walker neil@baysidenews.com.au A FRANKSTON real estate agent has been fined for failing to have trust accounts audited in accordance with state laws. Glenn Michael Ryan, 69, of Glenn Ryan Real Estate was fined $2000 and ordered to pay $1100 in costs after a hearing at Frankston Magistrates’ Court last week. The audit infringement is the second time in five years that Mr Ryan has failed to comply with audit requirements on trust accounts. In 2011 the Victorian Civil and Administrative Tribunal (VCAT) ordered Mr Ryan “to establish better trust account procedures” due to a failure to correctly balance trust accounts for 13 months between 2008 and 2010. Trust accounts were also not audited in a timely manner. Real estate agents must set up trust accounts to hold home buyers’ deposits and rental bonds. Consumer Affairs Victoria issued Mr Ryan with an infringement notice after he failed to have his trust accounts audited within three months of the 2013-14 financial year as required under the Estate Agents Act 1980. Mr Ryan chose to have the infringement heard in court and said the latest infringement was an administration mix-up. “There is no way I can force an auditor to turn up,” he said. “They [the auditor] decided in July they couldn’t do the audit [until a later date]. I then wrote to the Justice De-

Jumpin’ Jack flash: Jack Jetson, 13, takes to the air over the dirt mounds installed as part of a new BMX track at Lloyd Park in Langwarrin. Picture: Yanni

partment and told them I may have some troubles getting it audited … but they then decided it didn’t matter whether I could get one – it was just my bad luck and I was going to be charged anyway.” Mr Ryan said he was charged by Consumer Affairs Victoria in October last year and decided to go to court. Consumer Affairs Victoria spokesman Michael Gleeson said Mr Ryan “elected to challenge the infringement in court, as was his right to do so”. “CAV wishes to make clear that the matter heard in court recently was in no way related to the 2011 VCAT proceeding. There was no allegation that Mr Ryan breached any of VCAT’s orders,” Mr Gleeson said. CAV confirmed there were no trust accounts irregularities after the belated audit was submitted. Real estate agents can be fined up to $18,200 for failing to have trust accounts audited within three months of the end of the financial year.