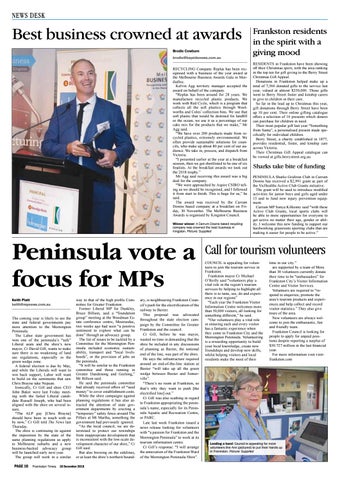 Best business crowned at awards Brodie Cowburn brodie@baysidenews.com.au RECYCLING Company Replas has been recognised with a business of the year award at the Melbourne Business Awards Gala in Mordialloc. Kelvin Agg territory manager accepted the award on behalf of the company. “Replas has been around for 28 years. We manufacture recycled plastic products. We work with Red Cycle, which is a program that collects all the soft plastics through Woolworths and Coles’ collection bins. We use that soft plastic that would be destined for landfill or the ocean, we use it as a percentage of our cake mix for the products that we make,” Mr Agg said. “We have over 200 products made from recycled plastics, extremely environmental. We often provide sustainable solutions for councils, who make up about 80 per cent of our audience. We take in, process, and dispatch from Victoria. “I presented earlier at the year at a breakfast session, then we got shortlisted to be one of six finalists. At the breakfast awards we took out the 2018 trophy.” Mr Agg said receiving this award was a big deal for the company. “We were approached by Aspire CSIRO telling us we should be recognised, and I followed it from start to finish. This is huge for us,” he said. The award was received by the Carrum Downs based company at a breakfast on Friday, 30 November. The Melbourne Business Awards is organised by Kingston Council. Winner winner: A Carrum Downs based recycling company was crowned the best business in Kingston. Picture: Supplied

Peninsula vote a focus for MPs Keith Platt keith@mpnews.com.au The coming year is likely to see the state and federal governments pay more attention to the Mornington Peninsula. The Labor state government has won one of the peninsula’s “safe” Liberal seats and the shire’s new mayor, Cr David Gill, wants to make sure there is no weakening of land use regulations, especially in the green wedge zone. A federal election is due by May, and while the Liberals will want to win back support, Labor will want to build on the sentiments that saw Chris Brayne take Nepean. Ironically, Cr Gill and shire CEO John Baker were last Friday meeting with the failed Liberal candidate Russell Joseph, who had been aligned with the shire on several issues. “The ALP guy [Chris Brayne] should have been in touch with us by now,” Cr Gill told The News last Thursday. The shire is continuing its against the imposition by the state of the same planning regulations as apply to Melbourne suburbs and a new business-backed advocacy group will be launched early next year. The group will work in a similar

way to that of the high profile Committee for Greater Frankston. Former Liberal MP for Dunkley, Bruce Billson, said a “foundation group” meeting at the Woodman Estate conference centre, Moorooduc, two weeks ago had seen “a positive sentiment to explore what can be done” through an advocacy group. The list of issues to be tackled by a Committee for the Mornington Peninsula included economic sustainability, transport and “local livelihoods”, or the provision of jobs on the peninsula. “It will be similar to the Frankston committee and those running in Greater Dandenong and Geelong,” Mr Billson said. He said the peninsula committee had already received offers of “seed money” to cover establishment costs. While the shire campaigns against planning regulations it has also attracted the attention of state government departments by erecting a “temporary” safety fence around The Pillars at Mt Martha, something the government had previously ignored. “As the local council, we are determined to protect our townships from inappropriate development that is inconsistent with the low-scale development character of our shire,” Cr Gill said. But also brewing on the sidelines, or at least the shire’s northern bound-

ary, is neighbouring Frankston Council’s push for the electrification of the railway to Baxter. This proposal was advocated throughout the state election campaign by the Committee for Greater Frankston and the council. Cr Gill, before he was mayor, wasted no time in demanding that the shire be included in any discussions of planning as Baxter, the notional end of the line, was part of the shire. He says the infrastructure required around an end-of-the-line station at Baxter “will take up all the green wedge between Baxter and Somerville”. “There’s no room at Frankston, so that’s why they want to push [the electrified line] out.” Cr Gill was also scathing in regard to Frankston appropriating the peninsula’s name, especially for its Peninsula Aquatic and Recreation Centre, or PARC. Late last week Frankston issued a news release looking for volunteers with “a passion for Frankston and the Mornington Peninsula” to work at its tourism information centre. Cr Gill’s response: “I will arrange the annexation of the Frankston Ward of the Mornington Peninsula Shire”.

Frankston residents in the spirit with a giving mood RESIDENTS in Frankston have been showing off their Christmas spirit, with the area ranking in the top ten for gift giving to the Berry Street Christmas Gift Appeal. Donations in Frankston helped make up a total of 7,566 donated gifts to the service last year, valued at almost $250,000. Those gifts went to Berry Street foster and kinship carers to give to children in their care. So far in the lead up to Christmas this year, gift donations through Berry Street have been up 10 per cent. Their online gifting catalogue offers a selection of 16 presents which donors can purchase for children in need. Their most popular gift last year “Something from Santa”, a personalised present made specifically for individual children. Berry Street, a charity established in 1877, provides residential, foster, and kinship care across Victoria. Their Christmas Gift Appeal catalogue can be viewed at gifts.berrystreet.org.au

Sharks take bite of funding PENINSULA Sharks Gridiron Club in Carrum Downs has received a $2,991 grant as part of the VicHealths Active Club Grants initiative. The grant will be used to introduce modified activities for junior boys and girls aged under 15 and to fund new injury prevention equipment. Carrum MP Sonya Kilkenny said “with these Active Club Grants, local sports clubs will be able to more opportunities for everyone to get active no matter their age, gender or ability. I welcome this new funding to support our hardworking grassroots sporting clubs that are making it easier for people to be active.”

Call for tourism volunteers COUNCIL is appealing for volunteers to join the tourism service in Frankston. Frankston mayor Cr Michael O’Reilly said “volunteers play a vital role in the region’s tourism services by helping to highlight all there is to taste, see, do and experience in our regions” “Each year the Frankston Visitor Information Centre welcomes more than 50,000 visitors, all looking for something different,” he said. “Our volunteers play a vital role in ensuring each and every visitor has a fantastic experience when they come to Frankston City and the Mornington Peninsula. Volunteering is a rewarding opportunity to build your local knowledge, create new friendships and develop new skills, whilst helping visitors and local residents make the most of their

time in our city.” are supported by a team of More than 30 volunteers currently donate their time to be “ambassadors” for Frankston City’s Visitor Information Centre and Visitor Services. Volunteers are required to “respond to enquiries, promote the area’s tourism products and experiences and help collect and record visitor statistics.” They also give tours of the area. New volunteers are always welcome to join the enthusiastic, fun and friendly team. Frankston Council is looking for people to apply for unpaid positions despite reporting a surplus of $30.727 million in the last financial year. For more information visit visitfrankston.com

Lending a hand: Council is appealing for more volunteers like Ann (pictured) to put their hands up in Frankston. Picture: Supplied