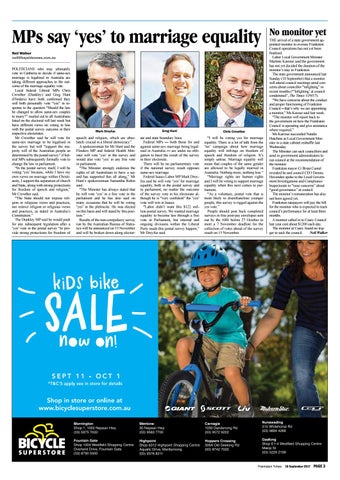 MPs say ‘yes’ to marriage equality Neil Walker neil@baysidenews.com.au POLITICIANS who may ultimately vote in Canberra to decide if same-sex marriage is legalised in Australia are taking different approaches to the outcome of the marriage equality vote. Local federal Liberal MPs Chris Crewther (Dunkley) and Greg Hunt (Flinders) have both confirmed they will both personally vote “yes” in response to the question “Should the law be changed to allow same-sex couples to marry?” mailed out to all Australians listed on the electoral roll last week but have different views on voting in line with the postal survey outcome in their respective electorates. Mr Crewther said he will vote for same-sex marriage to be legalised in the survey but will “support the majority will of the Australian people as determined by the postal survey” if federal MPs subsequently formally vote to change the law in parliament. “In the postal survey itself, I will be voting ‘yes’ because, while I have my own views on marriage within Christianity, I support the separation of church and State, along with strong protections for freedom of speech and religion,” Mr Crewther said. “The State should not impose religion or religious views and practices, nor restrict religion or religious views and practices, as stated in Australia’s Constitution.” The Dunkley MP said he would push for any subsequent legislation after a ‘yes’ vote in the postal survey “to provide strong protections for freedom of

speech and religion, which are absolutely crucial in a liberal democracy”. A spokeswoman for Mr Hunt said the Flinders MP and federal Health Minister will vote ‘yes’ in the survey and would also vote ‘yes’ in any free vote in parliament. “The Minister strongly endorses the rights of all Australians to have a say and has supported this all along,” Mr Hunt’s spokeswoman Samantha Robin said. “The Minister has always stated that he will vote ‘yes’ in a free vote in the parliament and he has also said on many occasions that he will be voting ‘yes’ in the plebiscite. He was elected on this basis and will stand by this position.” Results of the non-compulsory survey run by the Australian Bureau of Statistics will be announced on 15 November and will be broken down along elector-

ate and state boundary lines. Federal MPs — both those for and against same-sex marriage being legalised in Australia — are under no obligation to heed the result of the survey in their electorate. There will be no parliamentary vote if the national survey result opposes same-sex marriage. Federal Isaacs Labor MP Mark Dreyfus said he will vote ‘yes’ for marriage equality, both in the postal survey and in parliament, no matter the outcome of the survey vote in his electorate although he is “very confident” the ‘yes’ vote will win in Isaacs. “Labor didn’t want this $122 million postal survey. We wanted marriage equality to become law through a free vote in Parliament, but internal and ongoing divisions within the Liberal Party made this postal survey happen,” Mr Dreyfus said.

“I will be voting yes for marriage equality. There is a lot of talk from the ‘no’ campaign about how marriage equality will infringe on freedom of speech and freedom of religion. It’s simply untrue. Marriage equality will mean that couples of the same gender are allowed to be legally married in Australia. Nothing more, nothing less.” “Marriage rights are human rights and I will be voting to support marriage equality when this next comes to parliament. “As a voluntary, postal vote that is most likely to disenfranchise younger people, this survey is rigged against the yes vote.” People should post back completed surveys in free post-pay envelopes sent out by the ABS before 27 October to meet a 7 November deadline for the collection of votes ahead of the survey result on 15 November.

THE arrival of a state government appointed monitor to oversee Frankston Council operations has not yet been finalised. Labor Local Government Minister Marlene Kairouz said the government has not yet decided the duration of the monitor’s stay in Frankston. The state government announced last Sunday (10 September) that a monitor will attend council meetings amid concerns about councillor “infighting” in recent months (“‘Infighting’ at council condemned”, The Times 11/9/17). “We have concerns about the conduct and proper functioning of Frankston Council – that’s why we are appointing a monitor,” Ms Kaiouz said last week. “The monitor will report back to the government on how the Frankston Council is operating and give assistance where required.” Ms Kairouz succeeded Natalie Hutchins as Local Government Minister in a state cabinet reshuffle last Wednesday. The Minister can sack councillors and send in government administrators to run council at the recommendation of the monitor. Frankston mayor Cr Brian Cunial revealed he and council CEO Dennis Hovenden spoke to the Local Government Investigations and Compliance Inspectorate to “raise concerns” about “good governance” at council. The monitor’s remuneration has also not been agreed yet. Frankston ratepayers will pay the bill for the monitor who is expected to track council’s performance for at least three months. A monitor called in to Casey Council last year cost about $1200 each day. The monitor at Casey found no trigger to sack the council. Neil Walker