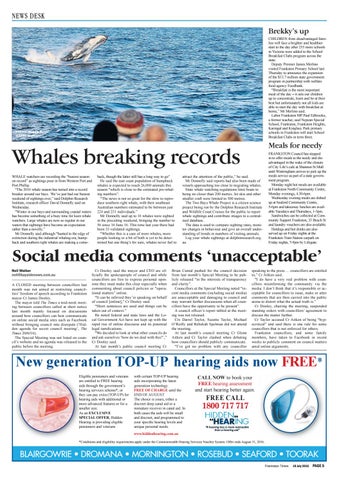 NEWS DESK Brekkyâ&amp;#x20AC;&amp;#x2122;s up CHILDREN from disadvantaged families will face a brighter and healthier start to the day after 255 more schools in Victoria were added to the School Breakfast Clubs program across the state. Deputy Premier James Merlino visited Frankston Primary School last Thursday to announce the expansion of the $13.7 million state government program in partnership with welfare food agency Foodbank. â&amp;#x20AC;&amp;#x153;Breakfast is the most important meal of the day â&amp;#x20AC;&amp;#x201C; it sets our children up to concentrate, learn and be at their best but unfortunately not all kids are able to start the day with breakfast at home,â&amp;#x20AC;? Mr Merlino said. Labor Frankston MP Paul Edbrooke, a former teacher, said Nepean Special School, Frankston, Frankston Heights, Karingal and Kinglsey Park primary schools in Frankston will start School Breakfast Clubs in term three.

back, though the latter still has a long way to goâ&amp;#x20AC;? He said the east coast population of humpback whales is expected to reach 26,000 animals this season â&amp;#x20AC;&amp;#x153;which is close to the estimated pre-whaling numbersâ&amp;#x20AC;?. â&amp;#x20AC;&amp;#x153;The news is not so great for the slow to reproduce southern right whale, with their southeast Australian numbers estimated to be between just 224 and 251 individuals.â&amp;#x20AC;? Mr Donnelly said up to 16 whales were sighted in the preceding weekend, bringing the number to 56 since 16 June 16. This time last year there had been 33 validated sightings. â&amp;#x20AC;&amp;#x153;Whether this is a case of more whales, more people looking or a bit of both is yet to be determined but one thingâ&amp;#x20AC;&amp;#x2122;s for sure, whales never fail to

attract the attention of the public,â&amp;#x20AC;? he said. Mr Donnelly said reports had also been made of vessels approaching too close to migrating whales. State whale watching regulations limit boats to being no closer than 200 metres. Jet skis and other smaller craft were limited to 300 metres. The Two Bays Whale Project is a citizen science project being run by the Dolphin Research Institute and Wildlife Coast Cruises for the public to report whale sightings and contribute images to a centralised database. The data is used to compare sighting rates, monitor changes in behaviour and give an overall understanding of trends in numbers of visiting animals. Log your whale sightings at dolphinresearch.org. au

FRANKSTON Council has stepped in to offer meals to the needy and disadvantaged in the wake of the closure of City Lifeâ&amp;#x20AC;&amp;#x2122;s cafe at Shannon St Mall until Wintringham arrives to pick up the meals service as part of a state government program. Monday night hot meals are available at Frankston North Community Centre, Monday evenings, 4.30-6pm. Wednesday evening meals are dished up at Seaford Community Centre, 5-6pm and takeaway lunches are available Tuesdays and Thursdays, 1-3pm. Sandwiches can be collected at Community Support Frankston, 35 Beach St and laundry vouchers are also available. Hotdogs and hot drinks are also served up on Friday nights at the Frankston Train Station carpark on Friday nights, 7-9pm by Lifegate.

with certain TOP-UP hearing aids incorporating the latest generation technology FREE OF CHARGE until the END OF AUGUST The choice is yours, either a discreet deep canal aid or a miniature receiver in canal aid. In both cases the aids will be small and discreet, and programmed to \RXU VSHFLÂżF KHDULQJ OHYHOV DQG unique personal needs. www.hiddenhearing.com.au