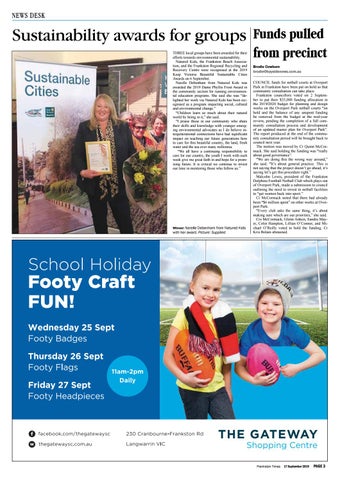 Sustainability awards for groups Funds pulled THREE local groups have been awarded for their efforts towards environmental sustainability. Natured Kids, the Frankston Beach Association, and the Frankston Regional Recycling and Recovery Centre were recognised at the 2019 Keep Victoria Beautiful Sustainable Cities Awards on 6 September. Narelle Debenham from Natured Kids was awarded the 2019 Dame Phyllis Frost Award in the community section for running environmental education programs. She said she was “delighted her work via Natured Kids has been recognised as a program impacting social, cultural and environmental change.” “Children learn so much about their natural world by being in it,” she said. “I praise those in our community who share their skills and knowledge with younger emerging environmental advocates as I do believe intergenerational connections have had significant impact on teaching our future generations how to care for this beautiful country, the land, fresh water and the sea over many millennia. “We all have a continuing responsibility to care for our country, the youth I work with each week give me great faith in and hope for a promising future. It is critical we continue to invest our time in mentoring those who follow us.”

with her award. Picture: Supplied

COUNCIL funds for netball courts at Overport Park in Frankston have been put on hold so that community consultation can take place. Frankston councillors voted on 2 September to put their $35,000 funding allocation in the 2019/2020 budget for planning and design works on the Overport Park netball courts “on hold and the balance of any unspent funding be removed from the budget at the mid-year review, pending the completion of a full community consultation process and development of an updated master plan for Overport Park”. The report produced at the end of the community consultation period will be brought back to council next year. The motion was moved by Cr Quinn McCormack. She said holding the funding was “really about good governance”. “We are doing this the wrong way around,” she said. “It’s about general practice. This is not saying that the project doesn’t go ahead, it’s saying let’s get this procedure right.” Malcolm Lewis, president of the Frankston Dolphins Football Netball Club which plays out of Overport Park, made a submission to council outlining the need to invest in netball facilities to “get women back into sport.” Cr McCormack noted that there had already been “$6 million spent” on other works at Overport Park. “Every club asks the same thing, it’s about making sure which are our priorities,” she said. Crs McCormack, Glenn Aitken, Sandra Mayer, Colin Hampton, Lillian O’Connor, and Michael O’Reilly voted to hold the funding. Cr Kris Bolam abstained.