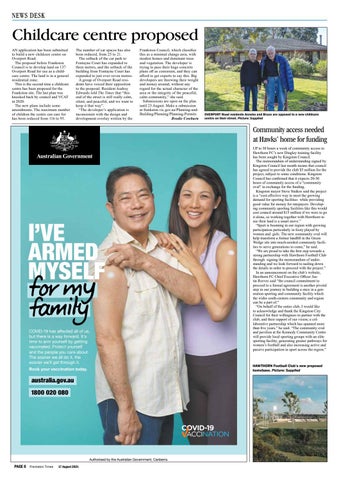 The number of car spaces has also been reduced, from 25 to 21. The setback of the car park to Fontayne Court has expanded to three metres, and the setback of the building from Fontayne Court has expanded to just over seven metres. A group of Overport Road residents have voiced their opposition to the proposal. Resident Audrey Edwards told The Times that “this end of the street is still really calm, silent, and peaceful, and we want to keep it that way”. “The developer’s application is inconsistent with the design and development overlay written by the

Frankston Council, which classifies this as a minimal change area, with modest homes and dominant trees and vegetation. The developer is trying to pass their huge concrete plans off as consistent, and they can afford to get experts to say this. Big developers are throwing their weight and money around, without any regard for the actual character of the area or the integrity of the peaceful, calm community,” she said. Submissions are open on the plan until 23 August. Make a submission at frankston.vic.gov.au/Planning-andBuilding/Planning/Planning-Permits Brodie Cowburn

OVERPORT Road residents Anneke and Bruce are opposed to a new childcare centre on their street. Picture: Supplied

COVID-19 has aﬀected all of us, but there is a way forward. It’s time to arm yourself by getting vaccinated. Protect yourself and the people you care about. The sooner we all do it, the sooner we’ll get through it. Book your vaccination today.

Authorised by the Australian Government, Canberra.

UP to 30 hours a week of community access to Hawthorn FC’s new Dingley training facility has been sought by Kingston Council. The memorandum of understanding signed by Kingston Council last month means that council has agreed to provide the club $5 million for the project, subject to some conditions. Kingston Council has confirmed that it expects 20-30 hours of community access of a “community oval” in exchange for the funding. Kingston mayor Steve Staikos said the project is a “cost-effective way to meet the growing demand for sporting facilities while providing good value for money for ratepayers. Developing community sporting facilities like this would cost council around $15 million if we were to go it alone, so working together with Hawthorn to use their land is a smart move.” “Sport is booming in our region with growing participation particularly in footy played by women and girls. The new community oval will help transform a former landfill in the Green Wedge site into much-needed community facilities to serve generations to come,” he said. “We are proud to take the first step towards a strong partnership with Hawthorn Football Club through signing the memorandum of understanding and we look forward to nailing down the details in order to proceed with the project.” In an announcement on the club’s website, Hawthorn FC Chief Executive Officer Justin Reeves said “the council commitment to proceed to a formal agreement is another pivotal step in our journey to building a once in a generation sporting and community facility which the wider south-eastern community and region can be a part of.” “On behalf of the entire club, I would like to acknowledge and thank the Kingston City Council for their willingness to partner with the club, and their support of our vision; a collaborative partnership which has spanned more than five years,” he said. “The community oval and pavilion at the Kennedy Community Centre will provide local sporting groups with an elite sporting facility, generating greater pathways for women’s football and also increasing active and passive participation in sport across the region.”