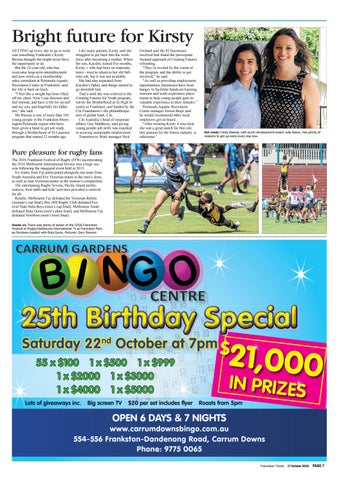 Bright future for Kirsty GETTING up every day to go to work was something Frankston’s Kirsty Biswas thought she might never have the opportunity to do. But the 22-year-old, who has overcome long-term unemployment and now works as a membership sales consultant at Peninsula Aquatic Recreation Centre in Frankston, said her life is back on track. “I feel like a weight has been lifted off my chest. Now I can function and feel normal, and have a life for myself and my son, and hopefully his father too,” she said. Ms Biswas is one of more than 160 young people in the Frankston-Mornington Peninsula region who have been given a hand to get job ready through a Brotherhood of St Laurence program that started 12 months ago.

Like many parents, Kirsty said she struggled to get back into the workforce after becoming a mother. When her son, Kayden, turned five months, Kirsty – who had been on maternity leave - tried to return to her old fulltime job, but it was not available. She had also separated from Kayden’s father, and things started to go downhill fast. That’s until she was referred to the Creating Futures for Youth program, run by the Brotherhood at its High St centre in Frankston, and funded by the Citi Foundation – the philanthropic arm of global bank, Citi. Citi Australia’s head of corporate affairs, Guy Matthews, said giving young people job skills was essential in securing sustainable employment. Transition to Work manager Nick

Orchard said the 85 businesses involved had found the participantfocused approach of Creating Futures refreshing. “They’re excited by the vision of the program, and the ability to get involved,” he said. “As well as providing employment opportunities, businesses have been hungry to facilitate hands-on learning sessions and work-experience placements to help young people gain invaluable experience in their industry.” Peninsula Aquatic Recreation Centre manager Simon Beqir said he would recommend other local employers get on board. “After meeting Kirsty it was clear she was a great match for this role. Her passion for the fitness industry is infectious.”

Get ready: Kirsty Biswas, with youth development coach Julia Baron, has plenty of reasons to get up early every day now.