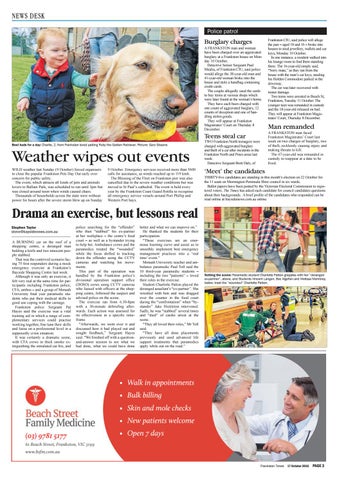 Burglary charges A FRANKSTON man and woman have been charged over an aggravated burglary at a Frankston house on Monday 10 October. Detective Senior Sergeant Paul Mealia, of Frankston CIU, said police would allege the 38-year-old man and 41-year-old woman broke into the house and stole a handbag containing credit cards. The couple allegedly used the cards to buy items at various shops which were later found at the woman’s home. They have each been charged with one count of aggravated burglary, 12 counts of deception and one of handling stolen goods. They will appear at Frankston Magistrates’ Court on Thursday 8 December.

Weather wipes out events WILD weather last Sunday (9 October) forced organisers to close the popular Frankston Pets Day Out early over concern for public safety. The event, which attracts all kinds of pets and animals lovers to Ballam Park, was scheduled to run until 3pm but was closed around noon when winds caused chaos. Thousands of households across the state were without power for hours after the severe storm blew up on Sunday

9 October. Emergency services received more than 5600 calls for assistance, as winds reached up to 119 kmh. The Blessing of the Fleet on Frankston pier was also cancelled due to the severe weather conditions but was moved to St Paul’s cathedral. The event is held every year by the Frankston Coast Guard flotilla to recognise all emergency service vessels around Port Phillip and Western Port bays.

TWO Frankston North teenagers were charged with aggravated burglary and theft of a car after incidents in the Frankston North and Pines areas last week. Detective Sergeant Brett Daly, of

Frankston CIU, said police will allege the pair – aged 18 and 16 – broke into houses to steal jewellery, wallets and car keys, Monday 10 October. In one instance, a resident walked into his lounge room to find them standing there. The 16-year-old simply said, “Sorry mate,” as they ran from the house with the man’s car keys, stealing his Holden Commodore parked in the driveway. The car was later recovered with minor damage. Two teens were arrested in Beach St, Frankston, Tuesday 11 October. The younger teen was remanded in custody and the 18-year-old released on bail. They will appear at Frankston Magistrates’ Court, Thursday 8 December.

Man remanded A FRANKSTON man faced Frankston Magistrates’ Court last week on two charges of burglary, two of theft, recklessly causing injury and making threats to kill. The 47-year-old was remanded in custody to reappear at a date to be fixed.

‘Meet’ the candidates THIRTY-five candidates are standing in this month’s election on 22 October for the 11 seats on Mornington Peninsula Shire council in six wards. Ballot papers have been posted by the Victorian Electoral Commission to registered voters. The Times has asked each candidate for council candidates questions about their backgrounds. A brief profile of the candidates who responded can be read online at baysidenews.com.au online.

Drama an exercise, but lessons real Stephen Taylor steve@baysidenews.com.au A BURNING car on the roof of a shopping centre, a deranged man holding a knife and two innocent people stabbed. That was the contrived scenario facing 75 first responders during a mock emergency exercise at Frankston’s Bayside Shopping Centre last week. Although it was only an exercise, it felt very real at the same time for participants including Frankston police, CFA, ambos – and a group of Monash University final year paramedic students who put their medical skills to good use coping with the carnage. Frankston police Sergeant Pat Hayes said the exercise was a vital training aid in which a range of complementary services could practise working together, fine tune their skills and liaise on a professional level in a supposedly crisis situation. It was certainly a dramatic scene, with CFA crews in thick smoke extinguishing the simulated car fire, and

police searching for the “offender” who then “stabbed” his ex-partner at her workplace – the centre’s food court – as well as a bystander trying to help her. Ambulance crews and the paramedics treated the “wounded” while the focus shifted to tracking down the offender using the CCTV cameras and watching his movements. This part of the operation was handled by the Frankston police’s divisional operation support office (DOSO) crews using CCTV cameras who liaised with officers at the shopping centre, followed the suspect and advised police on the scene. The exercise ran from 6.30-8pm with a 30-minute debriefing afterwards. Each action was assessed for its effectiveness in a specific timeframe. “Afterwards, we went over it and discussed how it had played out and sought feedback,” Sergeant Hayes said. “We finished off with a questionand-answer session to see what we had done, what we could have done

better and what we can improve on.” He thanked the students for their participation. “These exercises are an enormous learning curve and assist us to smoothly implement best emergency management practices into a ‘real time’ event.” Monash University teacher and ambulance paramedic Paul Toll said the 10 third-year paramedic students – including the two “patients” – loved their roles in the exercise. Student Charlotte Patton played the deranged assailant’s “ex-partner”. She wrestled with him and was dragged over the counter in the food court during the “confrontation” when “bystander” Jake Hickleton intervened. Sadly, he was “stabbed” several times and “died” of cardio arrest at the scene. “They all loved their roles,” Mr Toll said. “They have all done placements previously and used advanced life support treatments that paramedics apply while out on the road.”