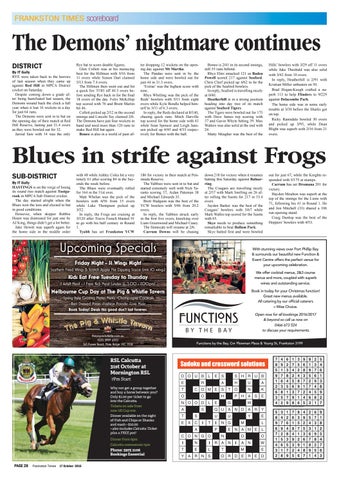 The Demons’ nightmare continues DISTRICT By IT Gully RYE were taken back to the horrors of last season when they came up against Red Hill in MPCA District cricket on Saturday. Despite coming down a grade after being humiliated last season, the Demons wound back the clock a full year when it lost 16 wickets in a day for just 64 runs. The Demons were sent in to bat on the opening day of their match at Red Hill Reserve, lasting just 21.4 overs as they were bowled out for 32. Jarrod Saw with 14 was the only

Rye bat to score double figures. Glen Collett was at his menacing best for the Hillmen with 5/16 from 11 overs while Simon Dart claimed 5/13 from 7.4 overs. The Hillmen then went out and hit a quick fire 7/185 off 40.5 overs before sending Rye back in for the final 18 overs of the day. Felix McKillop top scored with 76 and Brent Martin hit 46. Collett picked up 2/12 in the second innings and Lincoln Toy claimed 2/6. The Demons have just four wickets in hand and need more than 120 runs to make Red Hill bat again. Boneo is also in a world of pain af-

ter dropping 12 wickets on the opening day against Mt Martha. The Pandas were sent in by the home side and were bowled out for just 44 in 31.3 overs. ‘Extras’ was the highest score with nine. Rhys Whitling was the pick of the Reds’ bowlers with 5/11 from eight overs while Kyle Bendle helped himself to 3/11 of 6.3 overs. In reply, the Reds declared at 8/140, chasing quick runs. Mitch Darville top scored for the home side with 45 while Sean Spencer and Leigh Janssen picked up 4/45 and 4/33 respectively for Boneo with the ball.

Boneo is 2/41 in its second innings, still 55 runs behind. Rhys Elmi smacked 121 as Baden Powell scored 217 against Seaford. Chris Cleef picked up 4/62 to be the pick of the Seaford bowlers. In reply, Seaford is travelling nicely at 0/40. Heatherhill is in a strong position heading into day two of its match against Seaford Tigers. The Tigers were bowled out for 175 with Dave James top scoring with 57 and Gavin Whyte hitting 39. Max Watters was also solid at the end with 24. Matty Meagher was the best of the

Hills’ bowlers with 3/29 off 11 overs while Jake Theobald was also solid with 3/42 from 10 overs. In reply, Heatherhill is 2/91 with Kristian Miller unbeaten on 50. Brad Hogan-Keogh crafted a superb 113 to help Flinders to 9/229 against Delacombe Park. The home side was in some early trouble at 3/30 before the Sharks got on top. Ricky Ramsdale bowled 30 overs and picked up 3/95, while Dean Blight was superb with 2/16 from 21 overs.

Blues in strife against Frogs SUB-DISTRICT By IT Gully HASTINGS is on the verge of losing its round two match against Tootgarook in MPCA Sub District cricket. The day started alright when the Blues won the toss and elected to bat in good conditions. However, when skipper Robbie Hearn was dismissed for just one by AJ King, things didn’t get a lot better. Jake Hewitt was superb again for the home side in the middle order

with 48 while Ashley Coles hit a very timely 61 after scoring 84 in the Seconds the week before. The Blues were eventually rolled for 164 in the 51st over. Matt Whelan was the pick of the bowlers with 4/56 from 15 overs while Luke Thompson picked up 3/52. In reply, the Frogs are cruising at 3/120 after Travis French blasted 91 to go with his half century in Round 1. Tyabb has set Frankston YCW

186 for victory in their match at Peninsula Reserve. The Yabbies were sent in to bat and started extremely well with Nick Taranto scoring 57, Aidan Pateman 38 and Michael Edwards 35. Brett Hudgson was the best of the YCW bowlers with 5/46 from 20.2 overs. In reply, the Yabbies struck early in the first five overs, knocking over Liam Greenwood and Michael Casey. The Stonecats will resume at 2/6. Carrum Downs will be chasing

RSL Calcutta 31st October at Mornington RSL 7Pm Start Why not get a group together and buy a horse between you? Only $2.00 per ticket to go into the Calcutta. Tickets on sale from now till Cup eve. Dinner available on the night of Fish and Chips or Shanks and mash - $20.00 - also includes Calcutta Ticket plus a FREE pot! Dinner from 6pm Calcutta commences 7pm

down 218 for victory when it resumes batting this Saturday against Balnarring. The Cougars are travelling nicely at 2/57 with Mark Snelling on 26 after rolling the Saints for 217 in 53.4 overs. Jayden Barker was the best of the Cougars’ bowlers with 5/67 while Mark Walles top scored for the Saints with 65. Skye needs to produce something remarkable to beat Ballam Park. Skye batted first and were bowled

out for just 67, while the Knights responded with 5/175 at stumps. Carrum has set Dromana 201 for victory. Hayden Moulton was superb at the top of the innings for the Lions with 71, following his 41 in Round 1. He and Jon Mitchell (33) shared a 106 run opening stand. Craig Dunlop was the best of the Hoppers’ bowlers with 4/53.