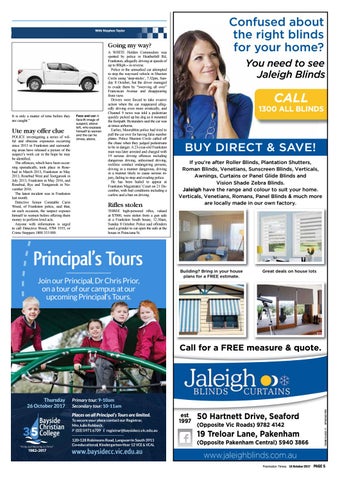 POLICE investigating a series of wilful and obscene exposures occurring since 2013 in Frankston and surrounding areas have released a picture of the suspect’s work car in the hope he may be identified. The offences, which have been occurring sporadically, took place in Rosebud in March 2013, Frankston in May 2013, Rosebud West and Tootgarook in July 2013, Frankston in May 2016, and Rosebud, Rye and Tootgarook in November 2016. The latest incident was in Frankston last month. Detective Senior Constable Carin Wood, of Frankston police, said that, on each occasion, the suspect exposes himself to women before offering them money to perform lewd acts. Anyone with information is urged to call Detective Wood, 9784 5555, or Crime Stoppers 1800 333 000.

Face and car: A face-fit image of suspect, above left, who exposes himself to women and the car he drives, above.

THREE high-powered rifles, valued at $7000, were stolen from a gun safe at a Frankston South house, 12.30am, Sunday 8 October. Police said offenders used a grinder to cut open the safe at the house in Poinciana St.

It is only a matter of time before they are caught.”

A WHITE Holden Commodore was spotted by police in Heatherhill Rd, Frankston, allegedly driving at speeds of up to 80kph – in reverse. Police in the unmarked car attempted to stop the wayward vehicle in Shaxton Circle using ‘stop-sticks’, 7.32pm, Sunday 8 October, but the driver managed to evade them by “swerving all over” Franciscan Avenue and disappearing from view. Drivers were forced to take evasive action when the car reappeared allegedly driving even more erratically, and Channel 9 news was told a pedestrian quickly picked up his dog as it mounted the footpath. Bystanders said the car was at times airborne. Earlier, Moorabbin police had tried to pull the car over for having false number plates. Police Shaxton Circle called off the chase when they judged pedestrians to be in danger. A 23-year-old Frankston man was later arrested and charged with 19 serious driving offences including dangerous driving, unlicensed driving, reckless conduct endangering persons, driving in a manner dangerous, driving in a manner likely to cause serious injury, failing to stop and evading police. He has been bailed to appear at Frankston Magistrates’ Court on 21 December, with bail conditions including a curfew and a ban on driving.