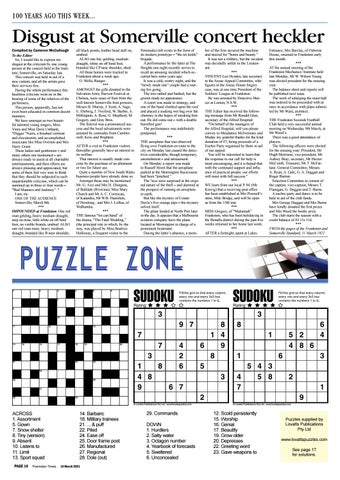 Disgust at Somerville concert heckler Compiled by Cameron McCullough To the Editor Sir, I would like to express my disgust at the criticism by one young person at the concert held in the Institute, Somerville, on Saturday last. This concert was held in aid of a new curtain, and all the artists gave their services free. During the whole performance this heartless criticism went on in the hearing of some of the relatives of the performers. This person, apparently, has not even been educated in common decent manners. We have amongst us two beautiful talented young singers, Miss Vines and Miss Doris Unthank; “Digger’’Nairn, a finished violinist and elocutionist; and accomplished musicians like Miss Overton and Mrs Harry Grant. These ladies and gentlemen – and many others not mentioned – are always ready to assist at all charitable entertainments, and their efforts are always pleasing and appreciated, but some of them feel very sore to think that they should be subjected to such unpardonable criticism, which can he summed up in three or four words – “Bad Manners and Jealousy”. “ I am, etc. ONE OF THE AUDIENCE Somerville, March 8th. *** IMPOUNDED at Frankston. One red roan gelding, heavy medium draught, snip on nose, little white on off hind foot, no visible brands, unshod. ALSO one red roan mare, heavy medium draught, branded like B near shoulder,

all black points, leather head stall on, unshod. ALSO one bay gelding, medium draught, white on off hind foot, branded like CP near shoulder, shod. All these horses were trucked to Frankston about a week ago. O. Wells, Ranger. *** AMONGST the gifts donated to the Salvation Army Harvest Festival at Chelsea, were cases of fruit from the well known Somerville fruit growers, Messrs B. Murray, J. Scott, A. Sage, E. Ehrberg, J. Twyford, W. Barber, A. Millington, A. Ross, G. Shepherd, M. Gregory, and Gray Bros. The festival was a pronounced success and the local salvationists were assisted by comrades from Camberwell, Kew, and Brighton. *** AFTER a visit to Frankston visitors thereafter generally have an interest in its welfare. That interest is usually made concrete by the purchase of an allotment or two for future use. Quite a number of New South Wales business people have already done so. Amongst these may be mentioned Mr. G. Azzi and Mrs H. Ehington, of Balldale (Riverina); Miss Mary Church and Mr A. C. Cormican, of Katandra; Mr W.B. Hamilton, of Howlong ; and Mrs J. Loftus, of Walbundia. *** THE famous “tin can band” of the drama, “The Fatal Wedding,” (the principal role in which, by the way, was played by Miss Beatrice Holloway, a frequent visitor to the

Peninsula) still exists in the form of its modern prototype – “the tin kettle” brigade. A performance by the latter at The Heights one night recently serves to recall an amusing incident which occurred here some years ago. It was a cold, wintry night, and the “newly made one” couple had a roaring fire going. The tins rattled and bashed, but the groom made no appearance. A resort was made to strategy, and one of the band climbed upon the roof and placed a soaking wet bag over the chimney in the hopes of smoking him out. He did come out – with a double barrelled gun! The performance was indefinitely postponed. *** THE aeroplane that was observed flying over Frankston en route to the city on Monday last caused the detectives considerable, though temporary, astonishment – and amusement. On Monday a report was made to Russell Street that the aeroplane parked at the Mornington Racecourse had been “pinched.” The ‘tecs were surprised at the original nature of the theft – and alarmed at the prospect of running an aeroplane to earth. But like the mystery of Conan Doyle’s five orange pips – the mystery solved itself. The plane landed at North Port later in the day. It appears that a Melbourne aviation company have the plane located at Mornington in charge of a prominent lieutenant. During the latter’s absence, a mem-

ber of the firm secured the machine and steered for “home and beauty.” It was not a robbery, but the incident was decidedly unfair to the Lieutenant. *** VINCENT Leo Hyndes, late secretary to the Anzac Appeal Committee, who figures in the Anzac House forgery case, was at one time President of the Soldiers’ League at Frankston. He was arrested by Detective Mercer at Leeton, N.S.W. *** THE Editor has received the following message from Mr Ronald Glen, secretary of the Alfred Hospital: “On behalf of the managers of the Alfred Hospital, will you please convey to Mesdames McSweeney and Muday my grateful thanks for the kind donation of £7, being proceeds of a Euchre Party organised by them in aid of our appeal. You will be interested to learn that the response to our call for help is most encouraging, and it is hoped that with the continued support and influence of practical people, our efforts will meet with full success.” *** WE learn from our local P. M. (Mr Kinvig) that a receiving post office has been established at Mrs Pownell’s store, Mile Bridge, and will be open as from the 15th inst. *** MISS Gregory, of “Malunnah” Frankston, who has been holidaying in the Benalla district during the past five weeks returned to her home last week. *** AFTER a fortnight, spent at Lakes

Entrance, Mrs Barclay, of Osborne House, returned to Frankston early this month. *** AT the annual meeting of the Frankston Mechanics’ Institute held last Monday, Mr W. Wilson Young was elected president for the ensuing year. The balance sheet and reports will be published next issue. The work of enlarging the main hall was ordered to be proceeded with at once in accordance with plans submitted by Mr Ward, architect. *** THE Frankston Seconds Football Club held a very successful annual meeting on Wednesday 9th March, at Mr Wood’s. There was a good attendance of players. The following officers were elected for the ensuing year: President, Mr Hugh Morrison; vice-president, Mr Aubrey Bray; secretary, Mr Hector McComb; Treasurer, Mr T. McFarlane. General Committee, Messrs A. Ryan, A. Gale, G. A. Duggan and Roger Burton. Selection Committee to consist of the captain, vice-captain, Messrs T. Flanagan, G. Duggan and T. Burns. A euchre party and dance is to be held in aid of the club funds. Mrs George Duggan and Mrs Burns have kindly donated the first prizes and Mrs Wood the booby prize. The club starts the season with a credit balance of £4 11s 11d. *** FROM the pages of the Frankston and Somerville Standard, 11 March 1921