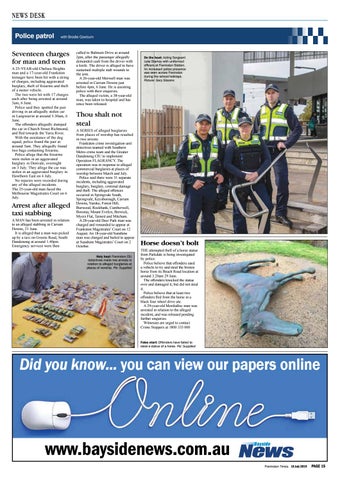 Seventeen charges for man and teen A 25-YEAR-old Chelsea Heights man and a 17-year-old Frankston teenager have been hit with a string of charges, including aggravated burglary, theft of firearms and theft of a motor vehicle. The two were hit with 17 charges each after being arrested at around 5am, 6 June. Police said they spotted the pair driving in an allegedly stolen car in Langwarrin at around 3.30am, 6 June. The offenders allegedly dumped the car in Church Street Richmond, and fled towards the Yarra River. With the assistance of the dog squad, police found the pair at around 5am. They allegedly found two bags containing firearms. Police allege that the firearms were stolen in an aggravated burglary in Donvale, overnight on 3 July. They allege the car was stolen in an aggravated burglary in Hawthorn East on 4 July. No injuries were recorded during any of the alleged incidents. The 25-year-old man faced the Melbourne Magistrates Court on 6 July.

Arrest after alleged taxi stabbing A MAN has been arrested in relation to an alleged stabbing in Carrum Downs, 21 June. It is alleged that a man was picked up by a taxi on Greens Road, South Dandenong at around 1.40pm. Emergency services were then

called to Balmain Drive at around 2pm, after the passenger allegedly demanded cash from the driver with a knife. The driver is alleged to have sustained multiple stab wounds to the arm. A 26-year-old Morwell man was arrested in Carrum Downs just before 4pm, 6 June. He is assisting police with their enquiries. The alleged victim, a 38-year-old man, was taken to hospital and has since been released.

On the beat: Acting Sergeant Julia Starkey with uniformed officers at Frankston Station. An increased police presence was seen across Frankston during the school holidays. Picture: Gary Sissons

Horse doesn’t bolt THE attempted theft of a horse statue from Parkdale is being investigated by police. Police believe that offenders used a vehicle to try and steal the bronze horse from its Beach Road location at around 3.20am 29 June. The offenders knocked the statue over and damaged it, but did not steal it. Police believe that at least two offenders fled from the horse in a black four wheel drive ute. A 29-year-old Mordialloc man was arrested in relation to the alleged incident, and was released pending further enquiries. Witnesses are urged to contact Crime Stoppers at 1800 333 000

False start: Offenders have failed to steal a statue of a horse. Pic: Supplied