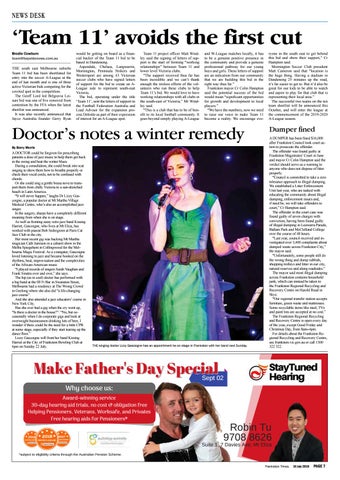 ‘Team 11’ avoids the first cut Brodie Cowburn team@baysidenews.com.au THE south east Melbourne suburbs Team 11 bid has been shortlisted for entry into the soccer A-League at the end of last month and is one of three active Victorian bids competing for the coveted spot in the competition. The Geoff Lord led Belgravia Leisure bid was one of five removed from contention by the FFA when the latest shortlist was announced. It was also recently announced that Jayco Australia founder Gerry Ryan

would be getting on board as a financial backer of the Team 11 bid to be based in Dandenong. Aspendale, Chelsea, Langwarrin, Mornington, Peninsula Strikers and Westernport are among 43 Victorian soccer clubs who have signed letters of support for the bid to create an ALeague side to represent south-east Victoria. The bid, operating under the title ‘Team 11’, sent the letters of support to the Football Federation Australia and Lead Advisor for the expansion process Deloitte as part of their expression of interest for an A-League spot.

Team 11 project officer Matt Windley said the signing of letters of support is the start of forming “working relationships” between Team 11 and lower level Victoria clubs. “The support received thus far has been incredible and we can’t thank enough the tireless efforts of the volunteers who run these clubs to help Team 11’s bid. We would love to have working relationships with all clubs in the south-east of Victoria,” Mr Windley said. “This is a club that has to be of benefit to its local football community. It goes beyond simply playing A-League

and W-League matches locally, it has to be a genuine positive presence in the community and provide a genuine professional pathway for our young boys and girls. These letters of support are an indication from our community that we are building this bid in the right way thus far.” Frankston mayor Cr Colin Hampton said the potential success of the bid would mean “significant opportunities for growth and development to local players.” “We have the numbers, now we need to raise our voice to make Team 11 become a reality. We encourage eve-

A DOCTOR could be forgiven for prescribing patients a dose of jazz music to help them get back in the swing and beat the winter blues. During a consultation, she could break into scat singing to show them how to breathe properly or check their vocal cords, not to be confused with chords. Or she could sing a gentle bossa nova to transport them from chilly Victoria to a sun-drenched beach in Latin America. “It will never happen,” laughs Dr Lizzy Gascoigne, a popular doctor at Mt Martha Village Medical Centre, who’s also an accomplished jazz singer. In the surgery, sharps have a completely different meaning from when she is on stage. As well as fronting sassy retro jazz band Kissing Harriet, Gascoigne, who lives at Mt Eliza, has worked with pianist Bob Sedergreen at Paris Cat Jazz Club in the city. Her most recent gig was backing Mt Martha magician Cath Jamison in a cabaret show in the Melba Spiegeltent in Collingwood for the Melbourne Magic Festival. As a youngster, Gascoigne loved listening to jazz and became hooked on the rhythms, beat, improvisation and the complexities of the African-American music “I played records of singers Sarah Vaughan and Frank Sinatra over and over,” she says. The hip (as in cool) doctor has performed with a big band at the HI Fi Bar in Swanston Street, Melbourne had a residency at The Wrong Crowd in Geelong where she also did “a life-changing jazz course”. And she also attended a jazz educators’ course in New York City. Has she ever had a gig when the cry went up, “Is there a doctor in the house?”: “No, but occasionally when I do corporate gigs and look at overweight businessmen drinking lots of beer, I wonder if there could be the need for a little CPR at some stage, especially if they start tearing up the dance floor.” Lizzy Gascoigne will front her band Kissing Harriet at the City of Frankston Bowling Club at 6pm on Sunday 22 July.

THE singing doctor Lizzy Gascoigne has an appointment be on stage in Frankston with her band next Sunday.

ryone in the south east to get behind this bid and show their support,” Cr Hampton said. Mornington Soccer Club president Matt Cameron said that “location is the huge thing. Having a stadium in Dandenong 25 minutes up the road, it’s far easier to get to. But it’d also be great for our kids to be able to watch and aspire to play for that club that is representing their local area.” The successful two teams on the ten team shortlist will be announced this October, and will enter the league at the commencement of the 2019-2020 A-League season.

Dumper fined A DUMPER has been fined $16,000 after Frankston Council took court action to prosecute the offender. The offender was found guilty at Frankston Magistrates’ Court in June and mayor Cr Colin Hampton said the verdict should serve as a warning to anyone who does not dispose of litter properly. “Council is committed to take a zero tolerance approach to illegal dumping. We established a Litter Enforcement Unit last year, who are tasked with educating the community about illegal dumping, enforcement issues and, if need be, we will take offenders to court,” Cr Hampton said. The offender in the court case was found guilty of seven charges with conviction, having been found guilty of illegal dumping in Leawarra Parade, Ballam Park and McClelland College over the course of 48 hours. “Last year, council received and investigated over 3,400 complaints about dumped waste across Frankston City,” the mayor said. “Unfortunately, some people still do the wrong thing and dump rubbish, shopping trolleys and litter in our city, natural reserves and along roadsides.” The mayor said most illegal dumping across Frankston contains household junk, which can instead be taken to the Frankston Regional Recycling and Recovery Centre on Harold Road in Skye. “Our regional transfer station accepts furniture, green waste and mattresses. Some recyclable items like steel, TVs and paint tins are accepted at no cost.” The Frankston Regional Recycling and Recovery Centre is open every day of the year, except Good Friday and Christmas Day, from 8am–4pm. For details about the Frankston Regional Recycling and Recovery Centre, see frankston.vic.gov.au or call 1300 322 322.