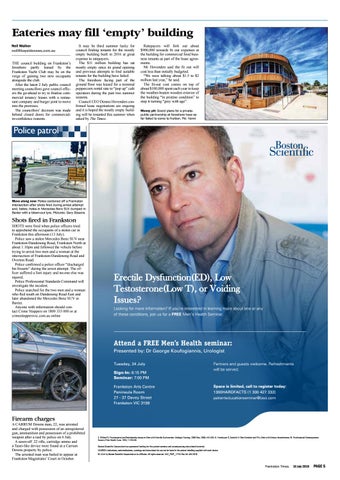 Eateries may fill ‘empty’ building Neil Walker neil@baysidenews.com.au THE council building on Frankston’s foreshore partly leased by the Frankston Yacht Club may be on the verge of gaining two new occupants alongside the club. After the latest 2 July public council meeting councillors gave council officers the go-ahead to try to finalise commercial tenancy leases with a restaurant company and burger joint to move into the premises. The councillors’ decision was made behind closed doors for commercialin-confidence reasons.

It may be third summer lucky for council finding tenants for the mostly empty building built in 2016 at great expense to ratepayers. The $11 million building has sat mostly empty since its grand opening and previous attempts to find suitable tenants for the building have failed. The foreshore facing part of the ground floor was leased for a minimal peppercorn rental rate to “pop up” cafe operators during the past two summer seasons. Council CEO Dennis Hovenden confirmed lease negotiations are ongoing and it is hoped the mostly empty building will be tenanted this summer when asked by The Times.

Ratepayers will fork out about $900,000 towards fit out expenses at the building for commercial food business tenants as part of the lease agreements. Mr Hovenden said the fit out will cost less than initially budgeted. “We were talking about $1.5 to $2 million last year,” he said. The fit-out cost comes on top of about $100,000 spent each year to keep the weather-beaten wooden exterior of the building “in pristine condition” to stop it turning “grey with age”. Money pit: Grand plans for a privatepublic partnership at foreshore have so far failed to come to fruition. Pic: Yanni

Move along now: Police cordoned off a Frankston intersection after shots fired during arrest attempt and, below, holes in Mercedes Benz SUV dumped in Baxter with a blown-out tyre. Pictures: Gary Sissons

SHOTS were fired when police officers tried to apprehend the occupants of a stolen car in Frankston this afternoon (13 July). Police saw a stolen Mercedes Benz SUV near Frankston-Dandenong Road, Frankston North at about 1.10pm and followed the vehicle before trying to arrest two men and a woman at the intersection of Frankston-Dandenong Road and Overton Road. Police confirmed a police officer “discharged his firearm” during the arrest attempt. The officer suffered a foot injury and no-one else was injured. Police Professional Standards Command will investigate the incident. Police searched for the two men and a woman who fled south on Dandenong Road East and later abandoned the Mercedes Benz SUV in Baxter. Anyone with information should contact Crime Stoppers on 1800 333 000 or at crimestoppersvic.com.au online

Erectile Dysfunction(ED), Low Testosterone(Low T), or Voiding Issues? Looking for more information? If you’re interested in learning more about one or any of these conditions, join us for a FREE Men’s Health Seminar.

Partners and guests welcome. Refreshments will be served.

A CARRUM Downs man, 22, was arrested and charged with possession of an unregistered gun, ammunition and possession of a prohibited weapon after a raid by police on 6 July. A sawn-off .22 rifle, cartridge ammo and a Taser-like device were found at a Carrum Downs property by police. The arrested man was bailed to appear at Frankston Magistrates’ Court in October.