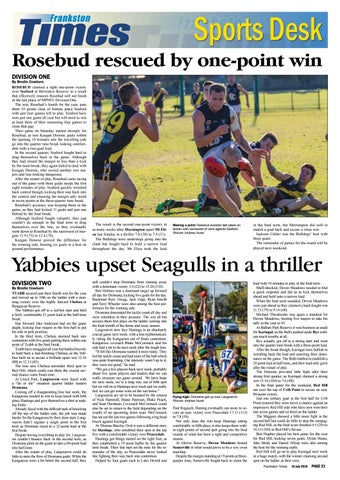 By Brodie Cowburn ROSEBUD claimed a tight one-point victory over Seaford at Belvedere Reserve in a result that effectively ensures Rosebud will not finish in the last place of MPNFL Division One. The win, Rosebud’s fourth for the year, puts them 10 points clear of bottom place Seaford with just four games left to play. Seaford have won just one game all year but will need to win at least three of their remaining four games to close that gap. Their game on Saturday started strongly for Rosebud, as two Keegan Downie goals within the opening 10 minutes saw the travelling side go into the quarter time break looking comfortable with a two-goal lead. In the second quarter, Seaford fought hard to drag themselves back in the game. Although they had closed the margin to less than a kick by the main break, they again failed to deal with Keegan Downie, who scored another two majors and was looking dangerous. After the restart of play, Rosebud came racing out of the gates with three goals inside the first eight minutes of play. Seaford quickly wrestled back control though, kicking their way back into the contest and ensuring the margin only stood at seven points at the three-quarter time break. Rosebud’s accuracy was keeping them in the game, as they had kicked 11 goals and just one behind by the final break. Although Seaford fought valiantly, they just couldn’t do enough in the final term to drag themselves over the line, as they eventually went down to Rosebud by the narrowest of margins 11.9 (75) to 12.4 (76). Keegan Downie proved the difference for the winning side, booting six goals in a best on ground performance.

The result is the second one-point victory in as many weeks after Mornington upset Mt Eliza last Sunday in a thriller 7.8 (50) to 7.9 (51). The Bulldogs were underdogs going into the clash but fought hard to hold a narrow lead throughout the day. Mt Eliza took the lead

in the final term, but Mornington did well to snatch a goal back and secure a close win. Jackson Calder was the Bulldogs’ best with three goals. The remainder of games for the round will be played next weekend.

By Brodie Cowburn TYABB secured just their fourth win for the year and moved up to 10th on the ladder with a stunning victory over the highly fancied Chelsea at Bunguyan Reserve. The Yabbies got off to a red-hot start and held a fairly comfortable 21 point lead at the half-time break. Star forward Jake Anderson had set the game alight, kicking four majors in the first half to put his side in pole position. In the third term, Chelsea stormed back into contention with five goals putting them within one point of Tyabb at the final break. Tyabb have struggled all year but battled bravely to hold back a fast-finishing Chelsea, as the Yabbies held on to secure a brilliant upset win 12.16 (88) to 12.13 (85). The loss sees Chelsea surrender third spot to Red Hill, which could cost them the crucial second chance come finals time. At Lloyd Park, Langwarrin were faced with a “do or die” situation against ladder leaders Dromana. Coming off a disappointing loss last week, the Kangaroos needed to win to keep touch with fifth place Hastings and give themselves a shot at making finals. Already faced with the difficult task of knocking off the top of the ladder side, the job was made harder for the Kangaroos by their slow start. Langwarrin didn’t register a single point in the first term as Dromana raced to a 22-point lead at the first break. Despite having everything to play for, Langwarrin couldn’t bounce back in the second term, as Dromana piled on the goals to take a 60-point lead into half-time. After the restart of play, Langwarrin could do little to stem the flow of Dromana goals. While the Kangaroos were a bit better the second half, they

still couldn’t stop Dromana from running away with a dominant victory 3.4 (22) to 15.20 (110). Ben Holmes was a dominant target up forward all day for Dromana, kicking five goals for the day. Ruckman Rory Gregg, Jack Gipp, Ryan Smyth and Terry Wheeler were also among the best performers for the winning side. Dromana dominated the tackle count all day and were relentless in their pressure. The win all but secures them first place on the ladder coming into the final month of the home and away season. Langwarrin now face Hastings in an absolutely crucial game next week, with a loss mathematically ruling the Kangaroos out of finals contention. Kangaroos co-coach Blake McCormack said his side had a lot to do next week after the tough loss. “It felt like Dromana wanted it more today. They led the tackle count and had more of the ball which was quite frustrating. Our intensity wasn’t up to it, they were too good,” he said. “We get a few players back next week, probably about five spine players and leaders that we can really structure our game around. We have hope for next week, we’re a long way out of fifth spot but we roll on to Hastings next week and we really feel we can get some wins on the run home.” Langwarrin are set to be boosted by the returns of Nick Hammill, Shane Paterson, Blake Peach, and Sean Herdman. Co-coach McCormack could also be set to return to the field depending on the results of an upcoming brain scan. McCormack has sat out the last two games following a big head knock against Karingal. At Thomas Barclay Oval it was a different story for Hastings, who solidified their spot in the top five with a comfortable victory over Pearcedale. Hastings got things started on the right foot, as they established a 19 point buffer by the quarter time break. Their fast start set the tone for the remainder of the day, as Pearcedale never looked like fighting their way back into contention. Helped by four goals each to Luke Hewitt and

Flying high: Dromana got up over Langwarrin. Picture: Andrew Hurst

Paul Rogasch, Hasting eventually ran away to secure an easy victory over Pearcedale 17.11 (113) to 7.8 (50). Not only does the win keep Hastings sitting comfortably in fifth place, it also keeps them within eight points of second spot going into the final rounds of what has been a tight and competitive season. At Glover Reserve, Devon Meadows hosted Somerville in what would prove to be a very even matchup. Despite the margin standing at 19 points at threequarter time, Somerville fought back to claim the

lead with 10 minutes to play in the final term. Shell-shocked, Devon Meadows needed to find a quick response and did so to kick themselves ahead and hold onto a narrow lead. When the final siren sounded, Devon Meadows were just ahead as they claimed a hard-fought win 11.13 (79) to 9.14 (68). Michael Theodoridis was again a standout for Devon Meadows, booting five majors to take his tally to the year to 45. At Ballam Park Reserve it was business as usual for Karingal, as the Bulls pushed aside Rye without much trouble at all. Rye actually got off to a strong start and went into the quarter time break with a three-point lead. After the break though, Karingal were bullish in wrestling back the lead and asserting their dominance on the game. The Bulls battled to establish a 20 point lead at half-time, and their lead only grew after the restart of play. The Demons provided little fight after their strong first quarter, as Karingal claimed a strong win 15.14 (104) to 7.6 (48). In the final game for the weekend, Red Hill ran over the top of Crib Point to secure an easy 80-point victory. Just one solitary goal in the first half for Crib Point ensured they were never a chance against an impressive Red Hill side who have now won their last seven games and sit third on the ladder. The Magpies showed a little more fight in the second half but could do little to stop the rampaging Red Hill, as the final score finished 4.5 (29) to 16.13 (109) in Red Hill’s favour. Ben Hughes played his best game for the year for Red Hill, kicking seven goals. Dylan Hoare, Jake Mold, and Daniel Allsop were also among the best for the winning outfit. Red Hill will go on to play Karingal next week in a huge match, with the winner claiming second spot on the ladder as their own. Frankston Times