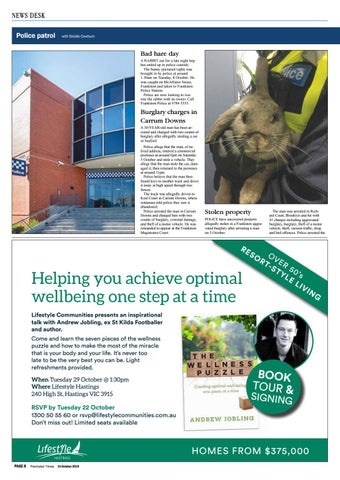 Bad hare day A RABBIT out for a late night hop has ended up in police custody. The bunny (pictured right) was brought in by police at around 1.30am on Tuesday, 8 October. He was caught on McAllister Street, Frankston and taken to Frankston Police Station. Police are now looking to reunite the rabbit with its owner. Call Frankston Police at 9784 5555.

Burglary charges in Carrum Downs A 30-YEAR-old man has been arrested and charged with two counts of burglary after allegedly stealing a car in Seaford. Police allege that the man, of no fixed address, entered a commercial premises at around 6pm on Saturday 5 October and stole a vehicle. They allege that the man stole the car, damaged it, then returned to the premises at around 11pm. Police believe that the man then found keys to another truck and drove it away at high speed through two fences. The truck was allegedly driven to Koel Court in Carrum Downs, where witnesses told police they saw it abandoned. Police arrested the man in Carrum Downs and charged him with two counts of burglary, criminal damage, and theft of a motor vehicle. He was remanded to appear at the Frankston Magistrates Court.

Stolen property POLICE have uncovered property allegedly stolen in a Frankston aggravated burglary after arresting a man on 3 October.

Helping you achieve optimal wellbeing one step at a time

The man was arrested in Richard Court, Brooklyn and hit with 41 charges including aggravated burglary, burglary, theft of a motor vehicle, theft, various traffic, drug and bail offences. Police arrested the

Lifestyle Communities presents an inspirational talk with Andrew Jobling, ex St Kilda Footballer and author. Come and learn the seven pieces of the wellness puzzle and how to make the most of the miracle that is your body and your life. It’s never too late to be the very best you can be. Light refreshments provided. When Tuesday 29 October @ 1:30pm Where Lifestyle Hastings 240 High St, Hastings VIC 3915