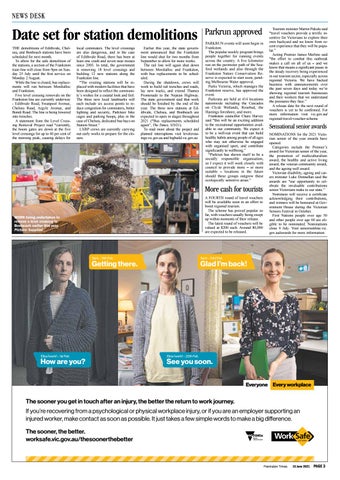 Date set for station demolitions THE demolitions of Edithvale, Chelsea, and Bonbeach stations have been scheduled for next month. To allow for the safe demolition of the stations, a section of the Frankston train line will close from 9pm on Sunday 25 July until the first service on Monday 2 August. While the line is closed, bus replacements will run between Mordialloc and Frankston. Five level crossing removals on the Frankston line are currently underway - Edithvale Road, Swanpool Avenue, Chelsea Road, Argyle Avenue, and Bondi Road. The line is being lowered into trenches. A statement from the Level Crossing Removal Project read “currently, the boom gates are down at the five level crossings for up to 40 per cent of the morning peak, causing delays for

local commuters. The level crossings are also dangerous, and in the case of Edithvale Road, there has been at least one crash and seven near misses since 2005. In total, the government is removing 18 level crossings and building 12 new stations along the Frankston line. “The existing stations will be replaced with modern facilities that have been designed to reflect the community’s wishes for a coastal look and feel. The three new local landmarks will each include six access points to reduce congestion for commuters, better lighting and security, Parkiteer bike cages and parking hoops, plus in the case of Chelsea, dedicated bus bays on Station Street.” LXRP crews are currently carrying out early works to prepare for the closure.

Earlier this year, the state government announced that the Frankston line would shut for two months from September to allow for more works. The rail line will again shut down between Mordialloc and Frankston, with bus replacements to be scheduled. During the shutdown, crews will work to build rail trenches and roads, lay new tracks, and extend Thames Promenade to the Nepean Highway. The state government said that work should be finished by the end of the year. The three new stations at Edithvale, Chelsea, and Bonbeach are expected to open in stages throughout 2021 (“Bus replacements scheduled again”, The Times, 3/3/21). To read more about the project and planned interruptions visit levelcrossings.vic.gov.au and bigbuild.vic.gov.au

Parkrun approved PARKRUN events will soon begin in Frankston. The popular weekly program brings people together for running events across the country. A five kilometer run on the perimeter path of the Seaford wetlands and also through the Frankston Nature Conservation Reserve is expected to start soon, pending Melbourne Water approval. Parks Victoria, which manages the Frankston reserve, has approved the event. Parkruns are held at 414 locations nationwide including the Cascades on Clyde Wetlands, Rosebud, the Hastings foreshore, and more. Frankston councillor Claire Harvey said “this will be an exciting addition to the recreational opportunities available to our community. We expect it to be a well-run event that can build healthy habits among people of all ages who may not otherwise be engaged with organised sport, and contribute significantly to wellbeing.” “Parkrun has shown itself to be a socially responsible organisation, so I expect it will work closely with council to provide more – or more suitable – locations in the future should these groups outgrow these ecologically sensitive areas.”

More cash for tourists A FOURTH round of travel vouchers will be available soon in an effort to boost regional tourism. The scheme has proved popular so far, with vouchers usually being swept up within moments of their release. The latest round of vouchers will be valued at $200 each. Around 80,000 are expected to be released.

WORK being undertaken to remove a level crossing in Bonbeach earlier this year. Picture: Supplied

Sensational senior awards NOMINATIONS for the 2021 Victorian senior of the year awards have opened. Categories include the Premier’s award for Victorian senior of the year, the promotion of multiculturalism award, the healthy and active living award, the veteran community award, and the ageing well award. Victorian disability, ageing and carers minister Luke Donnellan said the awards are “our opportunity to celebrate the invaluable contributions senior Victorians make to our state.” Nominees will receive a certificate acknowledging their contributions, and winners will be honoured at Government House during the Victorian Seniors Festival in October. First Nations people over age 50 and other people over age 60 are eligible to be nominated. Nominations close 9 July. Visit seniorsonline.vic. gov.au/awards for more information.

Tourism minister Martin Pakula said “travel vouchers provide a terrific incentive for Victorians to explore their own backyard and we know from recent experience that they will be popular.” Acting Premier James Merlino said “the effort to combat this outbreak makes a call on all of us – and we know that means a significant pause in the steady recovery being experienced in our tourism sector, especially across regional Victoria. We have backed business with announcements over the past seven days and today we’re showing regional tourism businesses and their workers that we understand the pressures they face.” A release date for the next round of vouchers is yet to be confirmed. For more information visit vic.gov.au/ regional-travel-voucher-scheme

See you soon. Everyone Every workplace

The sooner you get in touch after an injury, the better the return to work journey. If you’re recovering from a psychological or physical workplace injury, or if you are an employer supporting an injured worker, make contact as soon as possible. It just takes a few simple words to make a big difference. The sooner, the better. worksafe.vic.gov.au/thesoonerthebetter