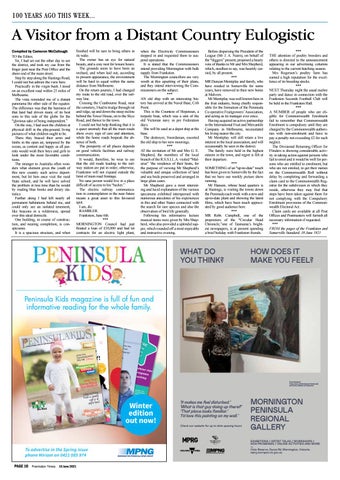 A Visitor from a Distant Country Eulogistic finished will be sure to bring others in its wake. The owner has an eye for natural beauty, and a cosy nest for leisure hours. The grounds seem to have been an orchard, and when laid out, according to present appearance, the environment will be hard to equal within the same distance from Melbourne. On the return journey, I had changed my route to the old road, over the railway line. Crossing the Cranbourne Road, near the cemetery, I had to trudge through rut and ridge, up and down the steep incline behind the Tower House, on to the Skye Road, and thence to the town. I could not but help thinking that it is a queer anomaly that all the main roads show every sign of care and attention, while the home roads bespeak the absence of both. The prosperity of all places depends on good vehicle facilities and railway communication. It would, therefore, be wise to see that the old roads leading to the railway station are put in order; otherwise, Frankston will not expand outside the limit of main road frontage. No sane person would live in a place difficult of access to his “tucker.” The electric railway communication in contemplation in the near future means a great asset to this favoured spot. I am, &amp;c RAMBLER. Frankston, June 6th. *** MORNINGTON Council had just floated a loan of £10,000 and had let contracts for an electric light plant,

Compiled by Cameron McCullough TO the Editor, Sir, I had set out the other day to see the district, and took my cue from the finger post near the Post Office and the shore end of the main street. Step by step along the Hastings Road, I could not but admire the view here. Practically in the virgin bush. I stood on an excellent road within 25 miles of Melbourne. The vista reminded me of a distant panorama the other side of the equator. The difference was that the bareness of that land had driven many of its best sons to this side of the globe for the “glorious sake of being independent.” On the way, I had seen the children at physical drill in the playground, living pictures of what children ought to be. There they braced their arms and limbs in the open air, tempered by the ocean, as content and happy as all parents would wish their boys and girls to look under the most favorable conditions. The stranger to Australia often wonders what element gives the youth of this new country such active deportment, but let him once visit the rural State school, and he will have solved the problem in less time than he would by reading blue books and dreary statistics. Further along I had left nearly all permanent habitations behind me, and could only see an isolated tenement, like beacons in a wilderness, spread over this ideal domicile. One building, in course of construction, and nearing completion, is conspicuous. It is a spacious structure, and when

when the Electricity Commissioners stepped in and requested them to suspend operations. It is stated that the Commissioners intend providing Mornington with bulk supply from Frankston. The Mornington councillors are very wroth at this upsetting of their plans, and they intend interviewing the Commissioners on the subject. *** AN old ship with an interesting history has arrived at the Naval Base, Crib Point. This is the Countess of Hopetoun, a torpedo boat, which was a unit of the old Victorian navy in pre Federation days. She will be used as a depot ship at the base. The destroyer, Swordsman, escorted the old ship to her new moorings. *** AT the invitation of Mr and Mrs G. E. Shepherd, the members of the local branch of the R.S.S.I.L.A. visited “Malurus” ‘the residence of their hosts, for the purpose of viewing Mr Shepherd’s valuable and unique collection of land and sea birds preserved and arranged in large glass cases. Mr Shepherd gave a most interesting and lucid explanation of the various specimens exhibited interspersed with numerous anecdotes of his experiences in this and other States connected with the search for rare species and also the observation of bird life generally. Following his informative lecture musical items were given by Mrs Shepherd, who also provided a splendid supper, which rounded off a most enjoyable and instructive evening.

Before dispersing the President of the League (Mr J. A. Nairn), on behalf of the “diggers” present, proposed a hearty vote of thanks to Mr and Mrs Shepherd, which, needless to say, was heartily carried, by all present. *** MR Duncan Mentiplay and family, who have resided in Somerville for some years, have removed to their new home at Malvern. Mr Mentiplay was well known here in the fruit industry, being chiefly responsible for the formation of the Peninsula Co operative Fruitgrowers’ Association, and acting as its manager ever since. Having acquired an active partnership in the International Fruit and Mercantile Company in Melbourne, necessitated his living nearer the city. Mr Mentiplay will still retain a live interest in the local association, and will occasionally be seen in the district. The family were held in the highest esteem in the town, and regret is felt at their departure. *** SOMETHING of an “up-to-date” touch has been given to Somerville by the fact that we have our weekly picture show running. Mr Hanson, whose head quarters is at Hastings, is visiting the towns down the Peninsula each week with a new and up-to-date plant and showing the latest films, which have been much appreciated by good audience here. *** MR Robt. Campbell, one of the proprietors of the “Circular Head Chronicle,”one of Tasmania’s brightest newspapers, is at present spending a brief holiday with Frankston friends.

WHAT DO YOU THINK?

*** THE attention of poultry breeders and others is directed to the announcement appearing in our advertising columns relating to the current hatching season. Mrs Rogerson’s poultry farm has earned a high reputation for the excellence of its breeding stocks. *** NEXT Thursday night the usual euchre party and dance in connection with the Frankston Seconds Football Club will be held in the Frankston Hall. *** A NUMBER of people who are eligible for Commonwealth Enrolment fail to remember that Commonwealth Enrolment is compulsory until they are charged by the Commonwealth authorities with non-enrolment and have to pay a penalty not exceeding £2 for such neglect. The Divisional Returning Officer for Flinders is showing considerable activity in taking action against persons who fail to enrol and it would be well for persons who are entitled to enrolment, but who are not enroled, to get their names on the Commonwealth Roll without delay by completing and forwarding a claim card to the Commonwealth Registrar for the subdivision in which they reside, otherwise they may find that steps have been taken against them for not complying with the Compulsory Enrolment provisions of the Commonwealth Electoral Act. Claim cards are available at all Post Offices and Postmasters will furnish all necessary information if requested. *** FROM the pages of the Frankston and Somerville Standard, 10 June 1921

HOW DOES IT MAKE YOU FEEL?

Peninsula Kids magazine is full of fun and informative reading for the whole family.

Don’t lo ok back , you are not goin g that w ay. Embrace the won derful future in store for you.

Euan Macleod From Above (Mornington Peninsula) synthetic polymer on polyester

The key to healin g O By Sheila Vijey arasa

Sciencef has shown that isa so traum e mark on a perso ag can leave a chem n&#39;s ical subsequent gene genes, which is passed dow n to rations. rtant Epigenetic gene impo expre memories of previo ssion means that the feelings, traumas and us as true, even thoug generations may be experience d in my life h the environmen t is different. The of the ‘mother woun core belief ding’ is ‘There something wrong When I would saye Th to myself, ‘Am I’sworth with me’. this was not my y?’ I came to realis voice, but a voice e that from many gener All of us have mothe ations ago. r wounds, to some differences and extent; the gener the discord with the patriarchy throug ational generations mean h s no one really escapes this fate. is how significantly What varies the impact prese nts itself in your be a shadow that life; it may you need to walk with, or the woun deeper and requir d may run e deeper healin g to transform your life.

I have come from a line of strong women. Strong had to endure diffi because they have culties. My mothe r had an arranged and migrated to a new country leavin marri a young age. My g behind her whole age grandmother’s husba family at attack when she nd died suddenly was in her forties of a heart . On one hand generational virtue I was gifted the s of my female elder resilience, - and s;streng th, tenacity and on the other, I inheri ted their ‘mother wounds’.

ur mother is our first love. For nine months in utero, are but one. There we is no one else in we have such a our life with whom primordial relati onship. In the wom begin a process b, we of inheriting an imprint from our what it means to mothers of be a woman. Whe n a mother gives process of sepa birth, a ration between the mother and begins. daughter

‘It makes me feel disturbed.’ ‘What is that guy doing up there?’ ‘That place looks familiar.’ ‘I’d love this painting on my wall.’ Check our website for up to date opening hours