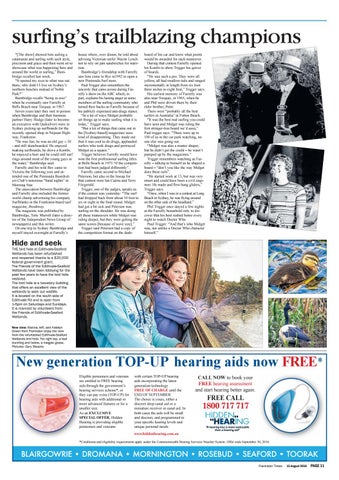 house where, over dinner, he told about advising Victorian surfer Wayne Lynch not to rely on jam sandwiches for nutrition. Bainbridgeâ&amp;#x20AC;&amp;#x2122;s friendship with Farrelly saw him come to Rye in1992 to open a new Peninsula Surf store. Paul Trigger also remembers the sincerity that came across during Farrellyâ&amp;#x20AC;&amp;#x2122;s show on the ABC which, in part, explains his lasting anger at some members of the surfing community who turned their backs on Farrelly because of his publicly expressed anti-drugs stance. â&amp;#x20AC;&amp;#x153;In a lot of ways Midget probably set things up to make surfing what it is today,â&amp;#x20AC;? Trigger says. â&amp;#x20AC;&amp;#x153;But a lot of things that came out in the [Sydney-based] magazines were kind of disappointing. They made out that it was cool to do drugs, applauded surfers who took drugs and portrayed Midget as a square.â&amp;#x20AC;? Trigger believes Farrelly would have won the first professional surfing titles at Bells Beach in 1973 â&amp;#x20AC;&amp;#x153;if the competition had been judged differentlyâ&amp;#x20AC;?. Farrelly came second to Michael Peterson, but also in the lineup for that contest were Ian Cairns and Terry Fitzgerald. Trigger, one of the judges, speaks as if the contest was yesterday: â&amp;#x20AC;&amp;#x153;The surf had dropped back from about 10 foot to six or eight in the final round. Midget had got a bit sick and Peterson was surfing on the shoulder. He was doing all these maneuvers while Midget was riding deeper, but they were getting the same scores [because of wave size].â&amp;#x20AC;? Trigger said Peterson had a copy of the competition format on the dash-

with certain TOP-UP hearing aids incorporating the latest generation technology FREE OF CHARGE until the END OF SEPTEMBER The choice is yours, either a discreet deep canal aid or a miniature receiver in canal aid. In both cases the aids will be small and discreet, and programmed to \RXU VSHFLÂżF KHDULQJ OHYHOV DQG unique personal needs. www.hiddenhearing.com.au